Some Historical Trends in Children’s Clothing

A couple of months back, Lisa posted about a push-up bikini top sold by Abercrombie Kids, a store that targets kids ages 7-14. It led to a lively discussion, here and elsewhere, about the sexualization of young girls as well as socialization into beauty standards from a young age; eventually Abercrombie pulled the product from their website.

Leontine G. sent in a link to an image of a dress from the Metropolitan Museum of Art website that puts that debate into some historical context. While you might expect this to be a woman’s formal ball gown, they believe it was actually for a young girl: 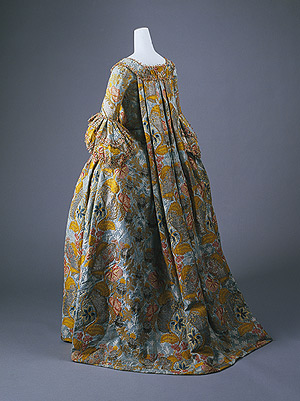 From the description (which seems to focus on the U.S. and Europe, though this isn’t specified):

Until the last quarter of the eighteenth century, children were dressed as miniature adults, with girls being put into corseted bodices from about three years of age, graduating to adult dress when they reached twelve or thirteen.

When a boy reached four years of age, he was…dressed in a replica of a man’s three-piece suit, consisting of coat, waistcoat, and breeches reaching to the knee…Girls were dressed in the adult style of clothing from about the age of two. They would wear a tight-fitting boned bodice laced at the back, with a long full skirt over a petticoat; at twelve they would change to fashionable dress, with the bodice being replaced by stays (a corset) over which was worn a robe, petticoat, and stomacher.

This portrait of Daniel Crommelin Verplanck, painted by John Singleton Copley in 1771, shows the then 9-year-old boy in adult-style clothing: 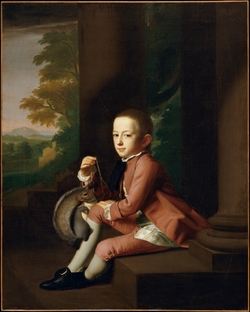 Starting in the late 1770s, new, looser clothing styles for children became popular, along with new ideas about childhood innocence and the necessity of separating children from the cares of the adult world. The Met provides a link to the 1796 painting The Sackville Children, by John Hoppner, as an example of the new style: 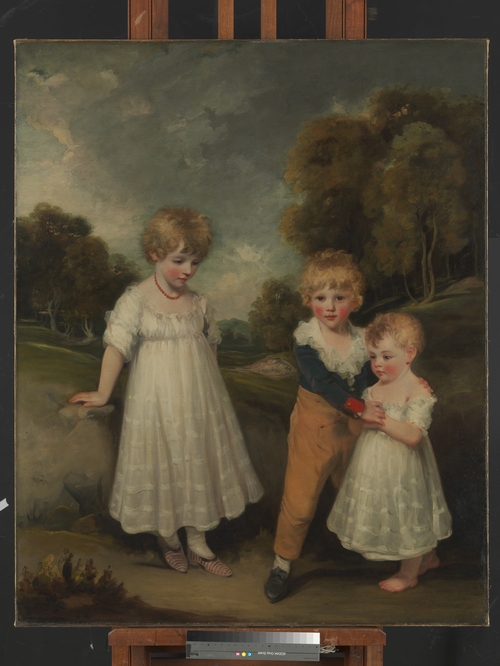 As Leontine notes, it’s an “interesting reminder that from an historical perspective, our society is the anomaly in *not* dressing children the same way we dress ourselves.”

I was kind of thinking about this the other day as I watched a man with his child in a coffee shop.. children dressed as adults, adults dressed as children. The man and his son were dressed in pretty much the same thing - Khaki shorts, polo-type shirts. There's a convergence between children's wear and adult wear, they seem to take equal influence from each other.

The basic difference between 18th century and the 21st in terms of children is, of course, that we nowadays separate childhood much more from youth and the adult age. We don't see children as small deficient adults anymore. Our aging society tends to see children as something pure, so the combination of children and sexuality is utterly repellent to us - while, paradoxically, our fascination for youth glorifies the young and even younger body.

Sidenote: When you talk about historical clothing, you should not concentrate on the aristocracy. I don't know if it's different with the working class or farmer children but it's well possible.

Potty training has evolved over the years, as well. Disposable diapers have increased the age of potty training by year(s) and it is now typical for parents to wait till children are fully mobile (ie- able to remove their pants themselves and walk to a potty) to even start the process. In many traditional cultures, infants are assisted and never lose their innate desire to keep themselves clean. This is not the same practice as forced potty training (like using suppositories and strict timing- heck I wonder if that was probably more in response to our crazy notions of hygiene). In the natural potty training caregivers notice cues and 'potty' the infant and infants even end up communicating with a sound or sign at very young ages. (Yes really).
It would be interesting to compare differences in clothing styles and pottying techniques. Even recently you can find split pants for pottying in China, but disposable diapers are catching on.
It is interesting to look at many of these 'old-fashioned' practices and see that some are getting a second look in modern times (babywearing, elimination communication, cosleeping, extended breastfeeding). Most of these honor a close and intimate bond between the infant-mother pair- something that our modern society is often in conflict with (especially the US with the abysmal support for maternal leave)

[and I agree, it is likely that less affluent families had more practical clothing styles, which I'm not sure was considered in this commentary]

I find it more interesting that the human history of wealthy people is abridged to "human history."

The article quotes - "Until the last quarter of the eighteenth century, children were dressed as miniature adults, with girls being put into corseted bodices from about three years of age, graduating to adult dress when they reached twelve or thirteen."

This blanket statement probably only applies to a small segment of the population in Europe and the United States at the time. How did industrial workers and farmers dress? How did their children dress? And most importantly of all - Why isn't it treated as relevant in this article?

I see that there are already some comments on this issue - Is there any source of information for the claims being made?

Contemporary woodcuts and engravings showing children working in textile mills and other early-industrial-revolution child-labor (you can't get more working-class than that, can you?) confirm that children in those classes dressed like miniatures of the adults in those classes. Naath's comment above accurately reflects the garments illustrated in such images.

"As Leontine notes, it’s an “interesting reminder that from an historical perspective, our society is the anomaly in *not* dressing children the same way we dress ourselves.”"

The above isn't true. I have 1 year old twins and believe me, baby and infant clothing about these days is simply small replicas of adult clothing. While you can still buy the 'traditional' full bodysuit (we call them stretch 'n' grows where I live) they are becoming more and more associated with sleepwear instead of daywear. And then there's the rise in baby shoes, which just looks ridiculous; baby can't walk! Why does it need shoes, when socks and booties will do?

The main difference, for me, at least, is that the idea was not to make the kids sexy in the time period you are mentioning.
And that's the idea now.
Being sexy et all.

For the record, here's an excerpt of an article about how enslaved Black children dressed in the US South:

Slave children were often given minimal amounts of clothing. On some farms, they went entirely naked. Mattie Curtis, who was enslaved in North Carolina, remembered in an interview years later:

"I went as naked as Yo' han' till I was fourteen years old. I was naked like that when my nature come to me. Marse Whitfield aren't carin', but atter dat mammy tol' him dat I had ter have clothes."

As Mattie's memory suggests, changes in the dress of slaves often occurred at the onset of adolescence. For boys, this usually meant trading in long dress-like shirts, similar to those worn by the children pictured above, for pants. Fountain Hughes, formerly a slave, recalled:

It goes without saying that these enslaved children wore no shoes.

Also for the record, here's an excerpt from an online article about the clothing worn by Black adults who were enslaved in the USA:

"Slaves also had a yearly clothing allowance. Douglass, for example, received "two coarse linen shirts, one pair of linen trousers, like the shirts, one jacket, one pair of trousers for winter, made of coarse negro cloth, one pair of stockings, and one pair of shoes". In his autobiography, Josiah Henson reported that in the winter slaves were given an " overcoat, a wool-hat once in two or three years, for the males, and a pair of coarse shoes".

House slaves usually lived better than those who worked in the fields. They usually had better food and were sometimes given the family's cast-off clothing."

"West African women and African American women combined slave clothing and American styles to establish a mode of dress. "Carry-overs" from Africa included cultivation of indigo and cotton, knowledge of dyeing, weaving and sewing, as handwoven garments, hair styles and head wrappings, and use of color. Slave seamstresses made all clothing worn by slaves. Field slaves dressed according to law or dress codes. Basic garment of female slaves consisted of a one-piece frock or slip of coarse "Negro Cloth." Cotton dresses, sunbonnets, and undergarments were made from handwoven cloth for summer and winter. Annual clothing distributions included brogan shoes, palmetto hats, turbans, and handkerchiefs. Attire for weddings, funerals, and festive occasions was the best affordable, whether handmade, secondhand, borrowed, or inexpensive ready-to-wear. Freed African Americans dressed similarly depending on location and means."

If you're particularly interested in the way that Children's clothing has changed over time, then DT Cook's THE COMMODIFICATION OF CHILDHOOD is another fantastic resource!

Here are some of Lesueur's Revolutionary gouaches, featuring the children of sans-culottes during the French Revolution: http://www.tice1d.13.ac-aix-marseille.fr/histgeo/documents.htm. As you can see, they're also dressed like their parents, despite belonging to a class mostly made up of artisans. (To clarify, they were not the poorest of the poor, nor did they make of the majority of the population, overwhelmingly rural during this period. Still, if one wanted to a bit more digging, it wouldn't be difficult to find examples of the same phenomenon among images of peasants.)

In other words, the Met article isn't wrong (for the West, anyway). I don't think they're making generalizations based on the examples given, but rather the examples given are a function of what's in their collections which for a number of reasons represent the way of life of the aristocracy and the haute bourgeoisie disproportionately. (That said, representatives of the majority of society are not absent from the fine arts, they're just more likely to be found in genre paintings than in individual portraits, which they would have been unable to afford.)

I don't quite understand what historical trends of dressing children like miniature adults has to do with the sexualisation debate. There's a difference between 'miniature adults' and 'miniature SEXY adults'. And most children's clothing today IS just mini-versions of the adult stuff. Little pairs of jeans, little t-shirts and tops, etc. I don't see how it's anomalous at all compared to these previous trends. It is interesting though, to consider the differences the historical context makes to the practices of clothing both children and adults and what those choices signify.

[…] Some Historical Trends in Children’s Clothing […]