On Cadbury, Naomi Campbell, and Colorblindness

The U.S. is not a very race-literate society.  We aren’t taught much about the history of race relations or racial inequality in school and almost nothing about how to think about race or how to talk to one another about these theoretically and emotionally challenging issues.  Many Americans, then, don’t have a very sophisticated understanding of race dynamics, even as most of them want racial equality and would be horrified to be called “racist.”

In teaching Race and Ethnicity, then, I notice that some of the more naive students will cling to color-blindness.  “Race doesn’t matter,” they say, “I don’t even see color.”   Being colorblind seems like the right thing to be when you’ve grown up being told that (1) all races are or should be equal and (2) you should never judge a book by its cover.  It is the logical outcome of the messages we give many young people about race.

But, of course, color blindness fails because race, despite being a social invention, still matters in our society.  Enter the ongoing scandal about the Cadbury candy bar ad featuring Naomi Campbell, sent in by Dolores R.,  Jack M., and Terri.  The ad compares the Dairy Milk Bliss Bar to Campbell.  It reads: “Move over Naomi, there’s a new Diva in town.” 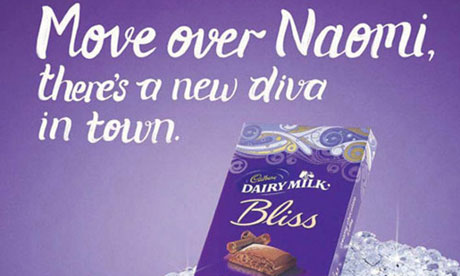 The ad has been called racist because it compares Campbell to a chocolate bar; chocolate is a term sometimes used to describe black people’s skin color or overall sexual “deliciousness.”  The ad, then, is argued to be foregrounding skin color and even playing on stereotypes of black women’s sexuality.

So what happened here?  One the one hand, I see the critics’ point.  On the other, I can also imagine the advertising people behind this ad thinking that they want to link the candy bar with the idea of a diva (rich, indulgent, etc.), and choosing Campbell because she is a notorious diva, not because she’s a black, female supermodel.  They could argue that they were being colorblind and that race was not at all a consideration in designing this ad.

The problem is that being colorblind in a society where race still colors our perceptions simply doesn’t work.  The truth is that race may not have been a consideration in designing the Cadbury ad, but it should have been.  Not because it’s fun or functional to play with race stereotypes, but because racial meaning is something that must be managed, whether you like it or not.  This is where Cadbury failed.

In my classes, I ask my earnestly-anti-racist students to replace color-blindness with color-consciousness.  We need to be thoughtful and smart about race, racial meaning, and racial inequality.  Racism is bad, but color-blindess is a just form of denial; being conscious about color — seeing it for what it is and isn’t, both really and socially — is a much better way to bring about a just society.

Cadbury, for what it’s worth, has apologized.

I get the "race-conscious vs colour blind" idea, but I keep wondering exactly HOW this is racist. Even if the chocolate is a blatant reference to her skin colour, I don't see where the racism enters. It's not the only thing here (here diva-ness seems more the focus) and I just can't seem to see anything inherently wrong with drawing comparisons between skin colour and other things in the world. Would this be racist if it were comparing skin to coffee or peaches and cream or whatever? I see no insult, no stereotype.

If I was likened to some kind of foodstuff in an ad, and one of the points of comparison was skin colour, I don't imagine I wold find that insulting. It's just an observation. I once told a friend that her skin reminded me off an aubergine - smooth, shiny and with an almost purple tone - she thought it was pretty apt and that was that.

I'm somewhat disappointed that this post never touches on the fact that the ad uses diamonds in the background. There are some interesting layers in this story, as they juxtapose chocolate (associated with Campbell's skin color, but also the atrocities perpetuated for the sake of chocolate profits, such as Nestle's various crimes and slave labor) and diamonds (associated with wealth and vanity, but also the blood diamonds of Africa and Campbell's own scandal involving them).

It's such a subtle and interesting combination of elements. Oh, had this been an art piece instead of an advertisement!

In an attempt to be more race-conscious, perhaps Cadbury can reissue the ad but with a preface at the top saying "We're not racist, but..."

Thank god it wasn't an ad for *white chocolate*.

What we really need to have a discussion about is what exactly constitutes racism. According to this, racism is not stratifying people by "race."

For future reference, this is not racism: an ad comparing a famous Black woman with a chocolate bar (with or without diamonds in the background).

This, on the other hand, is racism: "I hate all the n*ggers and I wish they would stop eating all my watermelons and just go back to the jungles of Africa sometime very soon." See the difference there?

Whenever you're wondering if something is racist or not, keep that example in mind, and scale your hysteria accordingly.

Lisa, your post reminded me of this one on color blindness.

I wonder how Naomi herself felt about this? Not as a racial issue, but just as a person being compared to a food. I'm a white girl, and I'm often compared to peaches, (When not being compared to a napkin in the winter time...)This happen sometimes by people I don't even know. It can get a little uncomfortable.

On the other hand, if the goal is a society in which the colour of the skin is just another matter-of-fact attribute of a person, too much of colour-consciousness might delay the process.

(I have seen the ad every day in my local supermarket, and I never thought of it as racist. Maybe a bit silly, but not racist. But then again, I do not identify as a POC. On the other hand, I am Italian and I find all the "stereotypical Italian" ads a little bit racist...)

As a British company, shouldn't you say that "Cadbury have aplogized"? ;)

I'm curious if any society would be considered a race-literate one. To what are we comparing ourselves?

Depressingly, I appear to have submitted my awesome comments to /dev/null. But I will not be defeated.

Personally, I'd expect an advertising company (or any entity expressing itself publicly) to be savvy enough to run its ads by people with different cultural experiences. It's impossible to foresee every interpretation or know every connotation so it seems wise to ask for the impressions of a diverse set of eye balls.

Unless, of course, the intention is to create controversy.

As for the ridiculous thread on whether Italians represent a race; race is an arbitrary classification of humans generally based on visual clues. Where I come from Italians are "black heads." "Race" in itself is completely irrelevant; it's the fact that we classify that matters. People experience the world differently because of those classifications, use different languages, have different sets of accepted truths, different cultures.... and then of course we assign value based on these classifications. And then there is history of hideous oppression and crime justified by being the superior class.

It certainly helps your credibility to be aware that everyone doesn't see through your glasses.

I don't think it's that heinous, but the whole campaign has an ill-starred lack of sensitivity and consideration - the one that drew my attention is the bus stop campaign (http://livingthecarfreelife.blogspot.com/2011/05/bliss-and-buses.html, not my own blog) which reads 'I don't do buses, darling'. It relegates public transportation to some sort of risible, undesirable necessity, undertaken only by those without the money and/or class to reach privilege and luxury. 'Divas' and other creatures of luxury, it says, would not disdain to be there. And this is somehow supposed to sell to people standing at bus stops? Clearly not. Perhaps its plan was to appeal to self-loathing bus users who daydream about ferraris and faux luxury goods. It smacks of a lack of social, and also environmental, conciousness.

I wonder if there will ever be a time when we don't need to be extremely cautious to not offend anyone with something that was clearly not intended to offend anyone.

Lisa, my compliments to on the points you made in your last two paragraphs of this post (before the update sentence about Cadbury's apology).