The Dangerous Trade-Off between Education and Incarceration

In recent years, as states around the country have been faced with the worst budget deficits on record, funding for many social service programs has been slashed or cut entirely. A new report from the NAACP demonstrates that during these budget clashes, funding for prisons has won out over spending for education. The report argues that these “misplaced priorities” are ultimately destructive.  Expanding prisons at this point does little to reduce crime and by spending these limited budget dollars on prisons rather than education, we are condemning the next generation of kids in poor neighborhoods to this same cycle of poor education, high crime rates, and mass incarceration.

However, the NAACP report only describes the first half of the problem—the failures of schools and the expansive role of the criminal justice system. The other half of the story is the legacy of these failures—strikingly low levels of education among those who wind up in our nation’s prisons—and the fact that corrections departments today are doing a worse job than ever in providing education inside of prisons as a way out of the revolving door of corrections.

This is important because we know that over 90 percent of inmates are at some point released and roughly half of them will return to prison within the next 3 years. Slashing prison education funding may provide a very small benefit to the current budget, but it also helps to fuel the growth in prisons that has suffocated education funding in the first place.

It is simple to document the dire educational needs of prisoners.  According to the 2004 Survey of Inmates in State and Federal Correctional Facilities, over 60 percent of state inmates never made it past 11th grade in school.  Among young inmates under 25 years of age, only 20 percent have completed high school.  If G.E.D.’s are included in this measure, only 66 percent of inmates 25 years or older have completed their basic education, compared to 85 percent of adults in the non-institutionalized population. 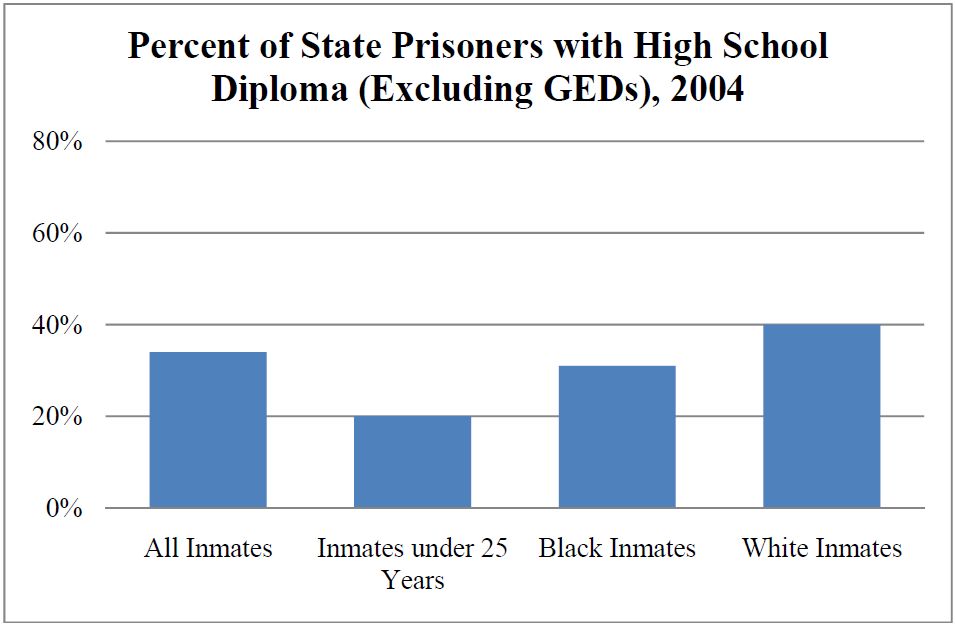 Sadly, the programs that serve these inmates’ needs have been on the chopping block for years.  In work recently published in Law & Society Review, I show that the ratio of inmates to teachers for academic and vocational education in prisons nationwide has more than doubled since the 1970s, growing from 53 inmates per teacher in 1974 to 112 inmates per teacher in 2005. Much of this change occurred in the most recent decade: in 1990, the ratio was only 67 inmates per teacher. 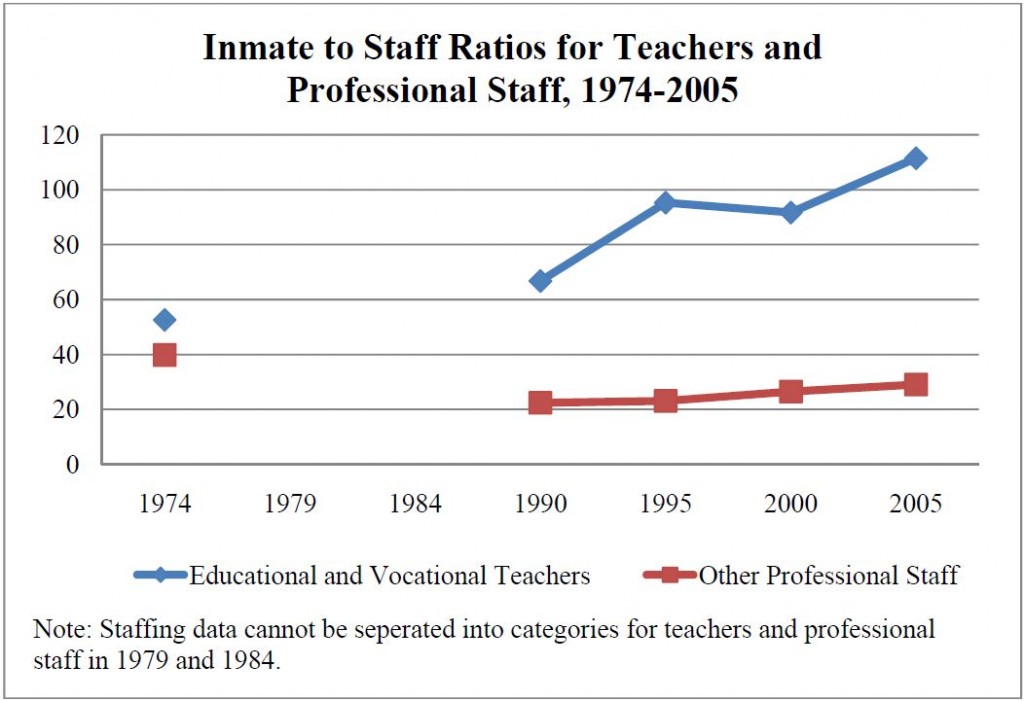 These declines in staffing investments are clearly translating into declining participation in prison education programs. Between 1991 and 2004, the percent of inmates reporting past or current participation in academic classes dropped precipitously from 43 percent to 27 percent.  If the rate of high school attendance had dropped by almost 50% in the span of a decade and a half, pundits would be railing against state legislators.  But since this happened behind prison walls, there has been very little awareness (let alone outrage) about these changes. 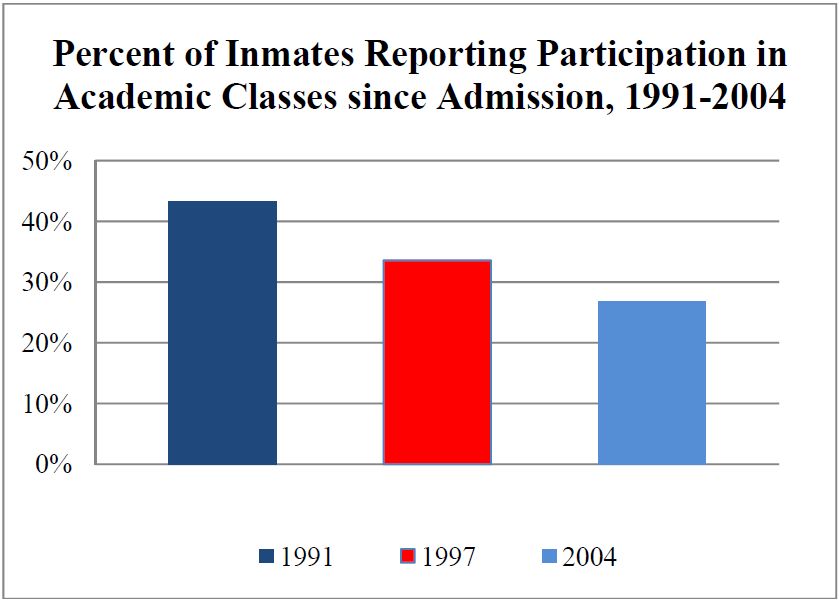 This strategy is a flawed attempt to cut costs since we know that education is one of the more successful ways to reduce recidivism.  In study after study, inmates who participate in educational programming are less likely to commit new crimes after release and to be re-incarcerated. This is in part because basic academic education and vocational training makes it more possible for ex-felons to find the kind of employment opportunities that forestall re-incarceration.

In recent years, this disinvestment in prison education has been even more brutal. In California, state lawmakers have taken $250 million away from rehabilitation programs in the last two years and are planning to cut another $150 million in the coming year. These losses in funding translate into a third of the adult programming budget. These cuts are an ironic move after Governor Schwarzenegger’s 2004 decision to change the name of the state agency from the “Department of Corrections” to the “Department of Corrections and Rehabilitation”.

Although some states have begun looking into ways to reduce correctional populations as a more sustainable way to manage costs, in the next few years, we can expect to see even more slashes to prison education funding.  Ultimately, this strategy is likely only to cut a small percentage of states’ immediate costs and will increase the need for incarceration spending in the near future.

Michelle Phelps is a Ph.D. candidate in Sociology and Social Policy at Princeton University.  Her work focuses on the punitive turn in the criminal justice system, examining how the daily operations of prisons changed (and remained the same) during the massive recent shift in the rhetoric and politics of punishment.  Her dissertation project is on the rise of probation supervision and you can find her new blog on the strange media surrounding probation at Probation Research.

This would seem to be a natural consequence of nearly doubling the incarceration rate during the same period of time.

Someday we're going to realize just how badly the war on drugs is for the more legitimate ends of our justice system.

"In study after study, inmates who participate in educational programming are less likely to commit new crimes after release and to be re-incarcerated."

It must be reiterated that correlation doesn't equal causation. It's quite possible that inmates who are already less likely to commit crimes after release are more likely to participate in educational programming. To elaborate: inmates who are already less likely to re-offend due to factors other than education (i.e. they're not affiliated with a gang, their initial offense was an isolated incident vs. part of a "criminal career,"they have a stronger family support structure than the average inmate, they're wealthier, and so on) may be more likely to self-select and thereby choose to participate in educational programming in the first place.

The other bone I have to pick with this post is the discussion of government funding. I live in California and unless the legislature puts a tax increase on the ballot (more and more unlikely as the days go by) and unless voters approve said ballot measure (also unlikely, 48% oppose vs. 46% support, according to the most recent San Francisco Chronicle poll) then there will have to be severe budget cuts. This is, in fact, a zero-sum game. If prison education funding gets spared, something else must be cut in its place. If prison funding gets cut, it will most likely be in service of saving some other government program. Yet, we get no discussion of this from the article's author, no holistic perspective on where prison funding fits into the budget deficit schema.

In my opinion, this is part of the problem. Part of the reason why California is in a budget deficit in the first place is because funding questions such as these are presented in piecemeal fashion. In the abstract, very few people oppose giving public schools more funding. In the abstract, very few people oppose giving state hospitals more funding. In the abstract, most people would probably support more funding for educational programs in prisons (this is debatable but I'll err on this side). The problem is when you put these disparate pieces together into a composite image and then realize that we either need to drastically step up public funding in general (i.e. raise taxes) or else we're sitting on several billions of dollar in unfunded liabilities (which threatens ALL government programs, on a much more existential level). So, in my opinion, talking about the cuts to educational prison programs in California is completely worthless without putting this all into focus and analyzing the larger budget picture.

And then there are things like this, that don't paint a pretty picture:

"SACRAMENTO, Calif.—Dozens of employees at a California state prison were paid hundreds of thousands of dollars for hours they didn't work during a three-month sampling period last year, according to an inspector general's report released Wednesday.

Auditors found that one mental health employee averaged less than 27 hours of his scheduled 40-hour work week inside Mule Creek State Prison, which is 40 miles southeast of the state capital. Teachers spent as few as 33 hours inside the prison, but were paid for a 40-hour week.

Union contracts say corrections officials aren't supposed to keep track of the hours employees actually work. Several employees told the auditors they understood, incorrectly, that their contracts let them leave early if they have completed their work for the day.

All 12 teachers and all five vocational instructors were absent when they were supposed to be at the prison, putting in 33 to 39 hours weekly. Their average salary is $77,000.

The problem was not limited to employees, according to the report: The prison's school principal and two vice principals put in 33 to 35 hours per week. They are paid annual salaries averaging $89,000."

The immediate question that comes up is: are prison educators in fact members of the California Correctional Peace Officers Assn.? If so, then the OP's points don't hold water in California. It's hypocritical to say you're in favor of reducing recidivism when the CCPOA has been adamantly against any kind of liberalization in narcotics laws and has been pushing hard to construct more and more prisons throughout the state.

Secondly, is it surprising that the populace is hesitant to raise taxes when they hear about situations like this? How many people have jobs in the private sector where your employer is not allowed to keep track of your time worked? Of those jobs, how many pay $77,000 a year (CA GDP per capita = roughly $40,000)? And, of THOSE jobs, how many are represented by arguably the most powerful union in the state? Come on, the public isn't THAT stupid, they can put 2 and 2 together. When I read about incidents like these, then read about the lobbying power that corrections unions wield in Sacramento and then come and read this OP, what I get out of it is not "Let's save a very important and vital social program that does a lot of good." I get: "My pay is being cut. My job is at risk. This sucks. Let me scrape up some arguments in favor of my job being kept to woo the public and hope that some other schlub has to take the cuts instead."

Once again there are so many comments on prison and the amount of money being spent. I am extremely glad to see that you added that the spending is simply on the building of prisons and not rehabilitating prisoners. Prisons are now corporations where the priority is to make money. The idea and wish is for recidivism to exist and never go away. If it does then the capital disappears and there won't be new corporations and new business. Prison has become in the top ten for up and coming business around the world. This is one of the reasons the arrest record has risen to levels never dreamed of. This is a projection and it is being seen thru. So there is amove to lock up a generation the only difference today the back in the day any color can be in this group as long as they make this money. So as long as society believes in this get tough on crime thing which is a joke and a disguise to assure numbers to this business, we help a new set of billionaires who exploit any of us. What do you think about this social aspect?

[...] THE DANGEROUS TRADE-OFF BETWEEN EDUCATION AND INCARCERATION by Lisa Wade, [...]

[…] Paralleling trends in the general population, female prisoners are (slightly) more likely to have completed high school diploma and (much more rarely) college. Still, the vast majority of prisoners have few educational credentials. As of 2004, over 60 percent of state inmates reported that they had not made it past 11th grade. […]