I suspect most Soc Images readers will, by now, be familiar with the Bechdel Test — the set of criteria for evaluating whether female characters are included in movies in even minimally non-male-centered ways, made popular by Alison Bechdel of Dykes to Watch Out For. To pass, a movie has to have at least two female characters who have at least one conversation with one another about something other than a man. For a quick overview, see our repost of Anita Sarkeesian discussing the Bechdel Test.

Leah B. let us know that there’s a website, Bechdel Test Movie List, entirely devoted to rating movies based on the criteria (with the stipulation that female characters have to actually be named to count). It consists of a list of movies that have been added and rated by readers; there are currently over 2,000 movies produced between 1900 and 2011 rated on the website. This is, obviously, nowhere near a random sample; as you’d expect, it’s highly weighted toward more recent movies, and of course not everyone agrees on the ratings (you can add a symbol to show you disagree and leave a comment on a movie’s rating page).

That said, the site includes a stats page that is interesting to look through just for a snapshot of the inclusion of women in these movies. Here’s a breakdown of the entire list; green indicates movies that passed all three tests, yellow passed 2, orange passed 1, and red didn’t pass any of the three: 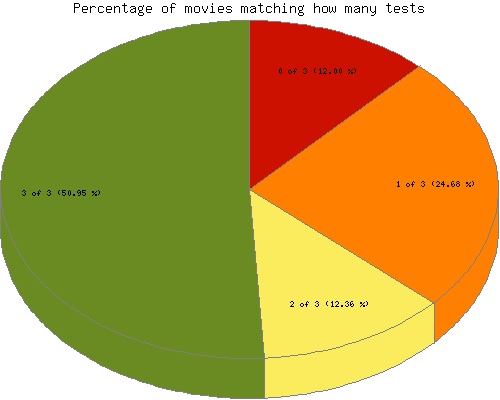 It’s fun to browse through, for entertainment value and a starting place for thinking about the Bechdel Test and pop culture.

It's interesting.... I try to catch myself when I think "oh that book or anime is wimpy and for girls because the main character is one." even though it's often the case with the target audience, as a girl it's considered 'cooler' if I like ones for guys

I'm really curious how many movies have at least two men in them who have a conversation about something other than a woman- so we can compare :)

It's an interesting site, but the ratings often have to be taken with a grain of salt. For instance, The Rocky Horror Picture Show is listed as "passing (perhaps)" because of a single line; the same is true of The Fisher King.

I think the spirit of the Bechdel Test is that there be an actual conversation, not just a few lines exchanged. The site, for better or for worse, takes the test at its letter.

(Also, when looking at the statistics, bear in mind that any movie on the site is there because it was submitted by a reader. I suspect that readers are more likely to submit films that pass than to submit yet another film that doesn't. For instance, until you get to the 2000s, a lot of Best Picture winners aren't in the database--The English Patient, Unforgiven, Dances With Wolves, Driving Miss Daisy, Rain Man, The Last Emperor, Platoon...and I'm not sure that any of these movies would pass the test, and most might not make it past the first rule. So the coverage of movies isn't particularly encyclopedic; it's spotty at best.)

What would be really illustrative is to do the same test for men and make such a chart. I feel like there wouldn't be much of a chart, but I know if my students see this one they'd say, "See, 50% of movies pass the test!" That it's a given for these criteria to be met for men is the point, though...and they aren't dire criteria.

Though I like the Bechdel test, I feel like this chart is misleading because (as the commenter above said) it would be so easy to look at this and think, "Wow, over half, we're doing so well!" But it's not that half the movies have equal numbers of fleshed out characters that are men and women, or both have agency, or are shown in positions of power, or anything like that, of course. It's that half the movies meet these incredibly minimal requirements for showing women as existing, having a name, and talking about something other than a man. That's barely anything. The point of the test was never to say that the movies that pass are doing a good job of representing women. It was to show how normalized it is to do a horrendous job.

It's not even that '50% of movies passed', it's that 50% of submitted movies passed. I'd like to see this test applied to say, all new release movies at the box office, for 1 year, or something. Results could be interesting.

While it's certainly instructive to discuss the percentage of movies that pass this test, I'm just terrified that 12% of submitted movies had 1 or 0 named female characters...

Hey, I wanted to talk to you about where Vidmate we are going in the relationship.

It could be small-talk about how tutuapp your day went, or it can be deeper and more meaningful conversations about what makes you both happy