Race and Representation in Hollywood 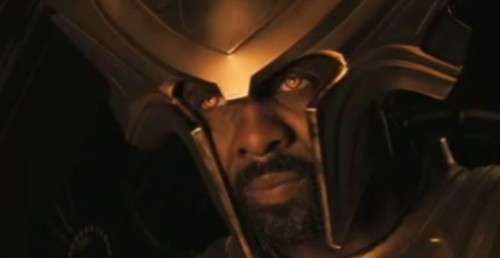 We have posted in the past about the controversy surrounding the casting of the movie The Last Airbender. Many fans of the original series were upset that Asian characters were recast as White, with the main cast initially containing no non-White characters at all. This fits in with a more general lack of Asian main characters in Hollywood.

More recently, a different controversy about race and casting emerged when British actor Idris Elba was cast as the Norse god Heimdall in Thor, though this character was always White in the comic book series.

Elba is *such* a good actor, it has to take a special kind of stupidity and bigotry to object to his taking a role.

Maybe the reaction is strictly American. In my country nobody even blinked, but I remember someone asking "why only on, all other characters are white?".
So... really... why only one black actor, it looked a bit like token character.

The fuss about Idris Elba in "Thor" seems pretty unnecessary.

The explanation given in the movie is that the "Norse gods" are actually people from another planet or dimension, whose technology is so advanced it's indistinguishable from magic. They happened to encounter the Vikings a millenia ago, who thought they were gods. So, there's no actual need in the plot for them to be of the same ethnicity as their worshippers.

It's also interesting that the attention was given to Idrid Elba as Heimdall rather than Tadanobu Asano as Hogun. They're both fairly small supporting parts, and I'd guess have about the same number of lines.

There was that "huge" (by comic book fan standards, anyway) controversy about whether Donald Glover, who is African-American (double-checked his citizenship!) should play Spiderman. Especially interesting, given that it was mostly a joking suggestion, and there wasn't really a chance it would ever happen, but people became furious anyway.

Holy crap, Samurai Pizza Cats, that takes me back.

But derailing the discussion, I don't know what to think of the Internet when it comes to a point where the disclaimers MovieBob put before the videos are actually necessary.

Elba was excellent in the role, and I couldn't imagine anyone else playing the part after seeing the movie. It was a little ironic that the black actor was playing the character known, in mythology, as "The whitest of the gods," but beyond that, who cares? He was awesome.

I think part of the outcry is because there is no reasonably articulated ending that results from the, admittedly justified, double standard at play. Nothing can ever make up for the years of slavery and oppression... so therefore, there can be no defined end to attempts to repair that damage. How can we measure when minorities have caught up "enough" (whatever that means) to where we can be equally offended by replacing white characters or black characters? It is a justified reality when dealing with our shitty world, and a reasonable current direction to be moving in, but it's not really a guiding principal, if that makes sense.

This compared to a general principal of equality, where switching races on a fictional character is either as serious or as ridiculous of a concern no matter who is being switched.

The people complaining about this sort of thing (at least, the one who aren't just being racist) are looking for a rule or a principal to provide a consistent framework for judging these sorts of actions. "It's bad if white people do it" may in some ways be correct currently... but it doesn't exactly provide a useful general principal.

PS I do think Elba is an excellent actor and don't care what race he is - in this case I think it's part of a choice that all casting directors have to make, in balancing the best actor compared to the person who most "looks" like the role they are trying to create.

At least he didn't die. His inclusion in the movie did strike a little note of tokenism but Elba's Heimdall was badass, played a major role in the movie, and DIDN'T DIE (gratuitously) as is so common with many token black characters.

I've been watching a lot of BBC stuff recently (New and old Dr. Who, Sherlock, a few others), and one thing I've noticed that's really refreshing is the inclusion of minority characters. Not only are there minority characters involved, but the vast majority of them are quite simply, just people. They aren't presented as representatives of their race, or token players, they were just characters like everybody else.
I like it a lot because it's so fucking unremarkable, in the same way Zoey and Wash's interracial marriage in "Firefly" was unremarkable. I like to think I'm a pretty progressive guy, and even I spent the first 2 or 3 episodes of firefly thinking "alright, when are they gonna make this a plot point of some sort?" by episode 4 I realized they weren't, and by episode 5 I realized why that's so awesome. No one in the "universe" of firefly gave a crap, and no one in the real world should either.

Brilliant! The only negative thing I could say about this video is how sad it is that he actually felt it necessary to put in that disclaimer at the beginning. And that part about the actors really made an impression on me. I mean, most of the time when discussing human rights and equality, we tend to get so caught up in the abstract ideas that the reality is all but forgotten: acting being a dead end job for black people, politics being a dead end job for women, gay people losing their their home and possessions when widowed, etc. Really, I think a lot of status quo- huggers would loosen up a bit if they were really confronted with what these rights actually mean to people.

I'm glad he was cast in that role. Those pillowy lips and those golden eyes in that helmet was HOT HOT HOT!

I find it funny this post came up as I was thinking about the persona in Persona 4. Incubus (sleeps with women) and Succubus (sleeps with men), along with Lilim (offspring of Lilith who also sleeps with men). Succubus is a curvy woman with wings and lingere(sp?). Lilim is also an attractive and enticing figure. Incubus, however, is this trollish figure, not attractive in the least. And has a rather obvious devilish protusion from his thong.

What was Atlus trying to say exactly? Men can idulge in a sexual fantasy, but women ouught not to? Its one of the few problematic features in a game that is pretty progressive about being true to yourself and others.

Also consider Mara, another persona in the same game. In myth, he tempts Buddah with his many daughters. In the game, he's represented as a giant monsterous phallic chariot... So, yeah...

I think there is a misunderstanding regarding the type of people complaining about the casting. Most Americans are not upset, and couldn't care less that a black man was cast in this role. It's not Americans who are upset, it is comic book fans. And rest assured, to comic book fans, it's not an issue of race, its an issue of staying true to the source material. With every movie adaptation of a comic book, you can expect some type of furor over casting. I have a friend who STILL complains that Hugh Jackman is too tall to play Wolverine. This was why it took 20 years to get a Watchmen movie made. As one of the most iconic graphic novels of all time, the movie had to stay completely true to the source, or their would have been riots in the streets. If a black man was cast as Rorshack, there would have been an uproar, and it would have had nothing to do with the man's race.