We’re trying to get our inbox under control, so I decided it was time for another of my occasional round-ups of gendered kids’ items, so here you go. My favorite example was an ad from a flyer for Save On Foods in Victoria, Canada, sent in by Joanna M. The advertised products are boyz and girlz inhalers, for all your gendered breathing needs. The boyz’ version is in green and gray with a graphic of a skateboarder, while the girlz’ inhaler is, of course pink, with a flower: 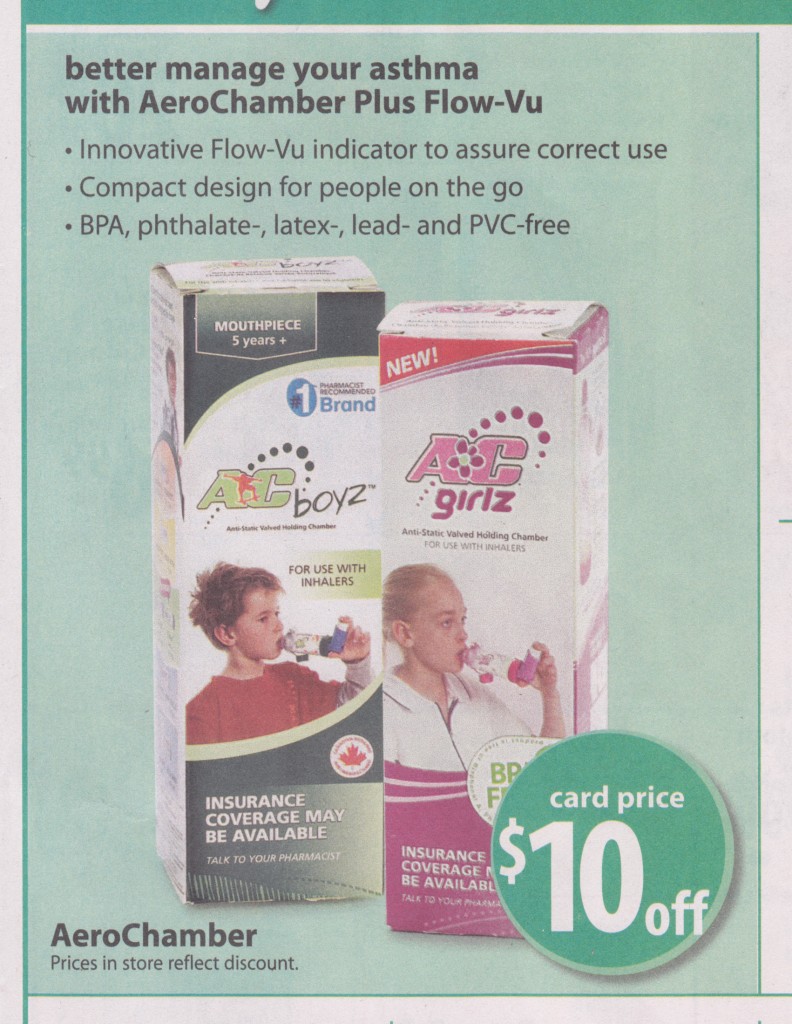 Amanda K.H. took this photo of 3 kid-sized Civil War hats for sale at the Abraham Lincoln Presidential Museum in Springfield, IL. In addition to the Union blue and the Confederate gray, there was a pink version:

The Pragmatist let us know about onesies for sale at Mommy and Kids Allure Boutique. The onesies include lists of “ingredients” for boys and girls. What are boys made of? Love, energy, and dirt: 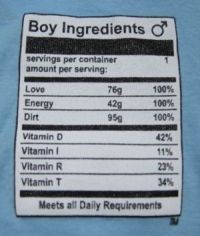 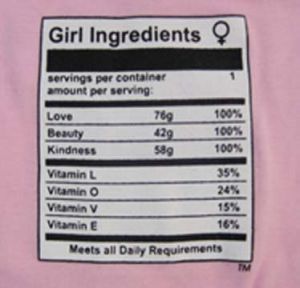 Elliott M. noticed that the Garanimals website doesn’t just just divide the clothing into boys’ and girls’ sections, but uses gendered language to describe them. The boys’ clothing is described with active language (“ready, set, go!”), and they’ll look “cool”. Girls, on the other hand, are “sugar and spice, everything nice” and a “princess,” and they’ll be “looking great and feeling better,” “cute,” “eye catching,” and “adorable”: 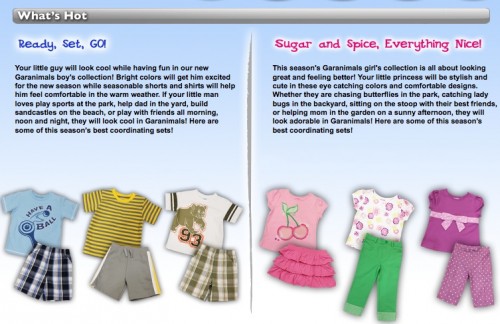 An anonymous reader saw these sets of stickers, divided into themes for boys and girls:

What are boy themes? Space, travel/transportation, dinosaurs, sports, and pirates, among others. Girls, on the other hand, are associated with stars, flowers, butterflies, clothes, makeup, personal hygiene, cheerleading, and shopping. Since the reader was buying them to give out to a Girl Guide group (equivalent to Girl Scouts in the U.S.) for badges about science, being active, and personal hygiene, she had to buy both sets.

Finally, Sarah M. sent in a photo she took at Target of two toys that define boys by what they do and girls by what they are. The toys are those types of little sit-and-scoot toy cars kids push around with their feet. The boys’ version is red and is, appropriately, called a Lil’ Fire Truck Ride-On. The pink version, on the other hand, is the Lil’ Princess Ride-On — because apparently there’s no appropriate vehicle to define as “girly,” so the easiest way to gender the toy was just to call it a thing for princesses and be done with it:

UPDATE: Philip Cohen pointed out another example on his blog, Family Inequality. Baby blankets at Amazon were available in blue for the “little man” and pink for the “little cupcake,” in case your baked goods are cold: 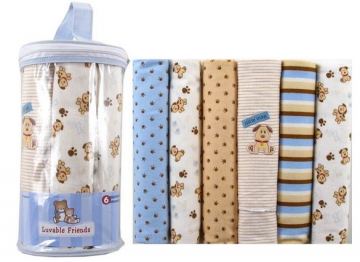 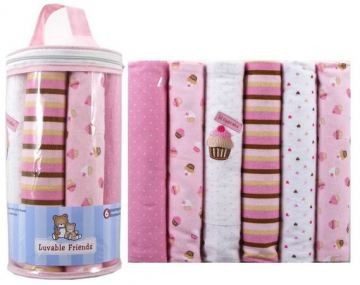 Those are great. Here are some receiving blankets for the collection... http://familyinequality.wordpress.com/2011/04/23/little-man-meet-little-cupcake/

Recently while at a Renaissance Faire, I saw a little girl of about 3 excitedly climbing onto some handmade wooden furniture. The mother yelled at the girl, saying, "You're so rough! You should have been a boy." I casually commented, "Why can't she just be a girl who's rough? Why are only boys allowed to be rough?"

The mother looked at me as if I had said something obscene.

So... if someone has both a boy and a girl, then that parent is getting an overdose of love? Or is love kind of like Vitamin C, in that you can't overdose on it (but it ultimately gets eliminated from the body)?

And with one boy or girl, then a parent is missing out on beauty and kindness or energy and dirt, respectively?

Yes, I know that this is supposed to be cute, but it's cuteness wrapped in the cloak of a logical fail.

I wonder how much of homophobia can be attributed to this kind of "cute and harmless" way people define gender?

*Shudders* This likening of people to food has to stop. I mean really, can't we at least let the girls grow up before they are turned into objects?

I'm beginning to think that couple who refused to reveal the gender of their child were on to something.

I'm cringing at all the boy/girl themed things I'll get from people when I have a baby.

The Civil War hats are what's most disturbing to me. If something like that was being sold at Target or Forever 21, fine, it's supposed to be a fashion item, it could be rainbow plaid for all t's worth. But at a historical museum, shouldn't HISTORY be the main focus, as opposed to cuteness? I think this tendency to assume little girls hate things that aren't pink is fairly new, too. Yes, there have been girl's baby clothes that are pink for decades, but when I was a kid (not long ago) it would be rare to go to a museum and see something that's supposed to be a replica of a historical garment that came in specific colors done in pink "for girls" despite being otherwise pretty accurate.

I'd also side-eye any parent, particularly a parent in Illinois, who would put a Confederate uniform on their kid, but for other reasons.

This explains a lot about the state of the world! Someone forgot to add the kindness to boys!!

Ugh. This just reminds me of how far we still need to go. And, I'm in a rather sour mood because things seem to be getting worse, not better.

As a history museum curator, those hats are filling me with pure, unadulterated rage.

Sometimes I dream of a better place where kids are allowed to be complete humans beings, and this silly divisions of "boy things" and "girls things" doesn't exist.

Of course, it's only a dream, an impossible dream :(

erghh i think its only going to get worse

Lisa and Gwen, thank you for your work on this blog! There are so any telling observations about gendered advertising here.

Sometime you should do a post on advertising that defies binary gender roles! Not that there's much to choose from, unfortunately.

Really glad to see more dialogue about this/upset to see how pervasive these messages remain. My partner and I make gender-neutral/gender critical baby clothes (www.lgbabyt.com). We started doing this because we were so upset by the market and our gender studies and sociology degrees drove us forward. We are more about creating dialogue than being retailers. We have gotten a mix of really positive responses and a good number of people telling us that "boys and girls" really are just different (in response to our trucks and flowers print) and moreover that they do "flirt" exclusively with the opposite sex, of course (in response to our "I'm not flirting, I'm a baby" print). As screenprinters we have found it difficult to find blank items that are not gendered and to find wholesalers whose advertising does not disappoint us. This is an ongoing struggle but also a lot of parents want to see this change.

No wonder my skin's been so dry lately, I've only been eating little boys instead of little girls, and they contain no vitamin E.

I'm almost 50 and was raised in a liberal (politically) home and during a time of feminist awareness.  That's why I'm so shocked when my nephew, who is only 30-something says things like "boys don't play with dolls" and "if she (his fiancee at the time) wants to keep her own name after we're married she can forget about getting married".  Why have we made NO progress?

My daughter was raised until she was about 2-and-a-half in a fairly gender-neutral way, but when she started going to a daycare centre with a lot of children, she was indoctrinated (by the other children) into the gender-labelled world and all of a sudden wanted to wear dresses, because pants "make me a boy".

We need to keep up the efforts, but know that the world is not going to change very quickly and probably not in our lifetime.

My 5 year old was explaining why we don't have too many things in pink in the house (we have 2 girls) : "There is nothing wrong with pink itself, but what happened to all other colours???".....

According to the ingredients, girls weigh 176g, but boys weigh 213g.

My 4.5 year old son took one look at these ads and said, "They're not being nice! That's not EVEN FAIR!"

I don't see what the big deal is. Just because they sell the "girly" version for girls, doesn't stop parents and kids choosing the other one. My parents took me shopping in boy Gap as well as girl Gap. This isn't a new phenomenon and it certainly wasn't one that did any harm to me growing up!