Caloric Intake Across the Globe and in an American Elementary School

I bumped up against two pieces of information today regarding caloric intake. I can’t confirm either, but I found both quite interesting. First, State Info features a map showing the average number of calories consumed each day in different countries across the globe. In the U.S., for example, the average is 3,754, in Argentina it is 2,959, in China it is 2,940, and in Congo it is 1,606.  Citizens of some countries, then, eat more than twice as many calories as citizens of others.

The fact that the average in almost every country exceeds the 2,000 calorie goal suggested by the U.S. Food and Drug Administration is fascinating in itself.

I was surprised at the average number of calories consumed in the U.S., where I live.  But then I came across the second graphic at GOOD which purports to reveal the number of calories and distribution of food types in the average school lunch and prison meal.  The comparison between the two is interesting enough, but I was struck by just how high the numbers were.  An average of 1,400 calories in your typical school lunch may very well indeed translate into over 3,000 calories a day. 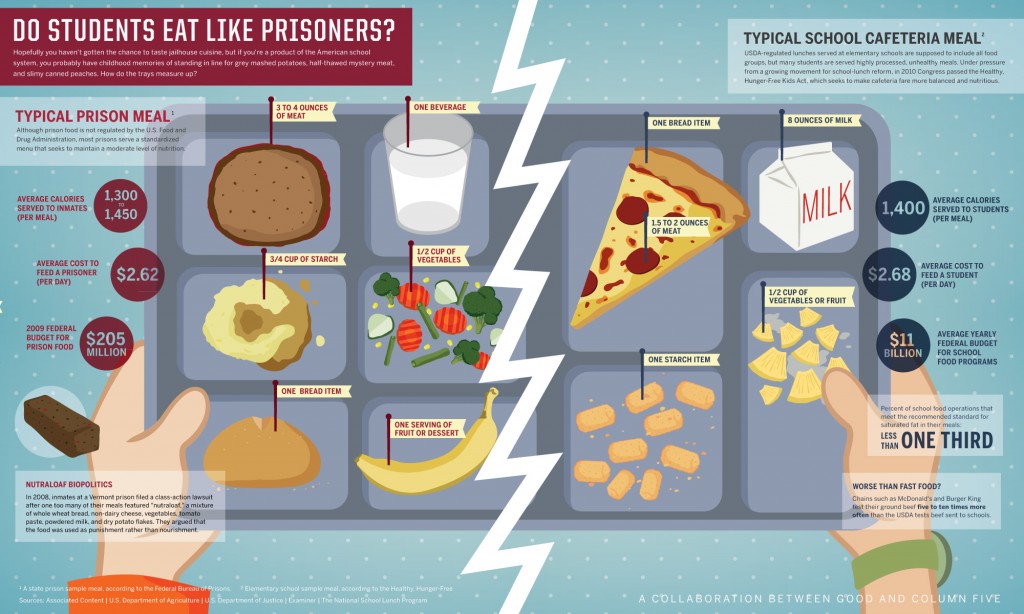 Might this suggest that the FDA's caloric recommendations are way off base?

I find it interesting that Australia is so much lower than the other English speaking countries, Britain, Canada and the US.

I think there is a common habit to lump those countries together culturally, whereas Australia isn't even up with most of Europe by this metric.

Yeah, I think there's a chance that the (frequently unreliable) FDA's recommendations are not really something that should be applied to schoolkids. I don't think Japanese kids are getting unhealthy from their lunches. On the other hand, most US lunches manage to be both too big and really lacking in nutrition, which is quite a feat. It's probably been posted here before, but check out http://whatsforschoollunch.blogspot.com/ --I'd definitely rather take in the calories in a French lunch or a Korean lunch than in a US lunch! (I wish more people would contribute to the site...)

I'm wondering how this information was calculated? (The link doesn't seem to offer any clues.)
If I try to estimate my daily caloric intake, I get about 2500 at most, and I eat larger quantities, on average, than most people I know (albeit I'm vegan, so my food is less calorie-dense, but still). The figures just seem very high based on my observations of the typical eating habits of other people I know, omnivores included.

The FDA recommendations ARE way off-base. I'm an active 27 year old female, 5'4" and 130 lbs, and I need 1900-2100 calories a day just to maintain my bodyweight and activity level. Sure, 2000 is about on the mark for me, and granted, most Americans don't qualify as 'active,' but most are larger than me and will require more calories. None of the men I know do well under 2500-3000 calories (unless they're trying to lose weight)...let alone growing kids who need more calories and nutrition at key points in their development.

How do we know that these are calories consumed versus calories prepared? We also throw away more food than in any other country.

Are you sure that isn't calories produced vs. calories consumed? Or calories purchased? Wasted? I really, really doubt enough people eat so many calories to make the average so high.

I don't know how they would even measure how many calories people eat. Did they interview people in every country? It has to be the calories produced - those figures are much easier to access. If that's the case, it makes much more sense.

That prison meal looks much more nutritious AND tastier than the school lunch. :|

I remember when I used to get school lunches, and the graphic seems pretty accurate. Ours usually came with a crappy little apple, and that was usually the only thing worth eating out of the whole bag. I would have liked to drink the milk, but the white milk was ALWAYS expired and tasted weird. (I assume the chocolate was also, but I never drank it. Presumably the chocolate flavor hid the expired-milk flavor.)

"An average of 1,400 calories in your typical school lunch may very well indeed translate into over 3,000 calories a day."

That HEAVILY depends. Disturbingly enough, there are a LOT of kids whose only meals are coming from the schools. If the school doesn't serve breakfast as well (and even so breakfasts at schools are significantly smaller than lunches), that means there are kids who are probably eating only 1400 calories a day. Even without children in poverty or neglect/abuse situations, a lot of kids flat out don't eat breakfast out of convenience, or only eat very small breakfasts, such as a pop tart, a piece of fruit, a granola bar, or a coffee drink (especially middle class kids in middle and high school, interestingly).

And this claim that it's too much based on calories....well, I recall being in grade school. Many schools cater to kids ranging from ages 3 to 14, and they have to serve the same thing to any child regardless of age. The meals actually aren't that large (they're caloric, but the portion sizes are pretty small, which I'll address in a second), because it seems like they're aiming their portion sizes at the average 7 or 8 year old. While second and third graders might be completely satisfied, it's way too much for a preschooler and not nearly enough for a 7th or 8th grader. My school, independent of the food service, had to start giving extra food to the kids over age 11, because it just was not enough food for a teen/tween (and 99% of us were not in any position to go hungry).

It's also caloric because it's crap food, not because it's a lot of food. The common accusation that we feed students like prisoners is, as far as I've heard, based on the quality of the food, as opposed to the amount of calories or what exactly it is that's being served. What they serve in school and prison cafeterias is often the stuff that they couldn't sell to McDonald's. The poor quality and the way it's prepared is terrible for you, and doesn't even produce a taste that you'd be willing to buy off the dollar value menu. Which brings up the point that most of these kids probably aren't eating 1400 calories per sitting.....kids will throw out food they don't like the taste of, and it's not uncommon for kids to throw out entire meals because it's so completely sub par, even compared to low-grade fast food meals

Am I only the one bothered at the fact that the budget for a prisoner's lunch is 205 million dollars while the students is only 11? Or by the fact that it looks much healthier. I'm not saying that prisoners don't deserve a nutritious meal, because they certainly do and I think it will help them, but I wish we could have the same standard for our children.

A quick search on the CDC website would suggest that these numbers are off. According to this report, average intake for men is 2500 calories and 1800 calories for women in the US (2007-2008).

Good Lord where was this problem back in my day, 60's-70'?? The problem is not the food and parsing calorie intake. The problem is that of metabolism. These yuots of today sit on their rears 24/7 watching tv, internet, texting, im'ing, etc.

What I don't see is parks and ballfields full of children. I don't see them wizzing by on bicycles. Hell, I know for a fact that if they can't catch a ride from school they bitch and protest the 1/2 mile walk home.

The last thing we need is the Government telling any of us what to eat. Have you ever seen the inside of a Federal Office building, humm?

Calorically, school lunches are the same as a McDonalds Big Mac with a large fry and a large full-sugar cola. Fantastic.

And from what I remember the salt and fat content wasn't any better either.