Last year I posted about a new ad campaign for Pretzel Crisps. The ads’ use of the phrase “you can never be too thin” inspired one man to alter one ad posted in NYC, including taping up images of news stories about individuals who have died of eating disorders. After the story got some attention, Snack Factory, the company that makes Pretzel Crisps, eventually apologized and said they were taking the ads down.

A victory, right? Except it seems like Snack Factory didn’t quite get the message. They replaced that ad with one that said “tastes as good as skinny feels.”

Dmitriy T.M. let us know that they then also released this ad, which similarly seemed to miss (or not care about) what the concerns were about the original: 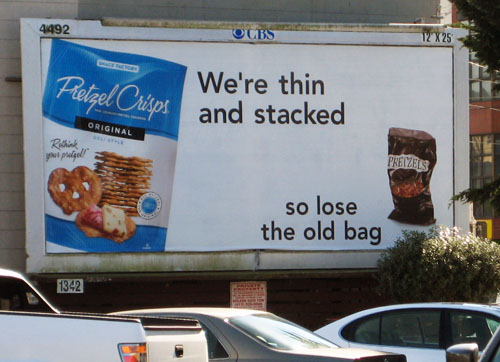 So…they reinforced the message about thinness, and throw in an extra insult on top of it. Classy.

I have to wonder if they weren't aware of the fact that many eating disorder websites and many people who suffer from eating disorders say things like "nothing tastes as good as skinny feels." Just wondering, is that phrase common knowledge? I suffered from an eating disorder so I don't know if I'm the only one who noticed it or not. Either way, this ad was definitely a bit triggering.

Side comment - the word "classy" as a positive descriptor is classist for... uh... obvious reasons.

It is clearly not the fault of marketers that certain people suffer from deficiencies in cognition significant enough to allow them to believe that starving themselves or habitually vomiting their meals will lead to a desirable figure. Furthermore I've yet to see an advert that instructs women to do this or even suggests this is a successful way to attain an impossible figure. What we perhaps need is a bolstering of public education in order to properly educate men and women among other things, not vandalized street adverts and coercion.

A free society would collapse if a person or group of people were to be forced through legislation or an atmosphere of "political correctness" to censor their words or artistic expressions for fear of inciting the mentally infirm to injure themselves.

That the suppression of free speech constitutes a victory in the author's mind reflects the sad state of our social sciences, our country.

I could not have stated my feelings better then you William.

This add may be in bad taste and against my personal convictions, but it is an accurate reflection of the backwards desires of our culture, imo. If this is not allowed then how could you justify billboards for luxury items that people can't afford, it may make them depressed or fell inadequate. What if that leads to suicide or drug dependency is that not as bad? It is a slippery slope that I feel is not worth tempting just to accommodate the small percentage of deficient people. I have my own deficiencies and I rather face them, and others face theirs rather than be burdened by my own and subsequently through censorship, the burdens of everyone else.

In a world where we personalize stuff, like food or gadgets there may always be someone who understand something wrong. For example imagine a picture of an IPad 2 with that statement "I am thinner and can multi task faster, so get rid of the old one." can easily be misread but sometimes there are things that are simply better because they are thinner, lighter, endure longer or are able to multi task. And there is advertisement for these attributes.

"We're thin [implicitly better] and [pun for having large breasts]! So [pun on slang for "get rid of your aging wife"]. Yes, this makes me want to buy pretzels.

I picture a marketing department full of trendy, thin people in their twenties, thinking it's hiLARious to create mean, ironic ads...and then I picture them later, in their forties and fifties, growing invisible, getting divorced, feeling bad about their bodies and being shocked, shocked by how awful our culture is to older/fatter/less pretty people. [I used to do secretarial support for a large, influential marketing department.]

Normally an ad for a thin, baked pretzel chip would be marketed to women so it seems strange to see it marketed to men at the expense of women. Why would the company want to appeal only to the people who are less likely to purchase such a product? I wouldn't say I'm offended that this company doesn't seem to want my money, just confused.

I think what some people don't get in these discussions is that no one thinks that advertising companies deliberately set out to cause eating disorders. But they do try and sell lifestyle, and in this case a lifestyle that dictates that we all want to be young, thin and hip.

The point is to call out people on ads that are done in bad taste.. like when someone walks into a funeral and says 'Hey, who died?' and everybody goes 'Dude.. too soon.'

Only in this case, the company, rather than realizing the original campaign was in poor taste, especially when eating disorders are a very real problem, as chosen to keep making the same tired joke, which just kind of makes them assholes. And we should be calling out assholery. It's self-defeating to say that 'it won't stop some advertisers from being assholes and it won't stop people from having eating disorders'.

It's one of those 'if you're not part of the solution, you're part of the problem' things.

[...] future.” I applaud the company for being receptive to complaints, too – and I hope that they, unlike the folks who make Pretzel Thins, actually learn from this [...]

I read this article! I hope you will continue to have such articles to share with everyone! thank you GHD SPORTS