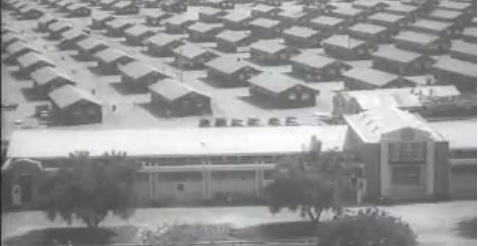 Following up on a post I put up last month about World War II internment camps for Japanese Americans, reader Eduardo let us know about a short film distributed by the federal Office of War Information explaining why the camps were necessary and trying to portray them in a positive light. It’s a great example of propaganda. Notice at about 2:45 the narrator explains the change from voluntarily to required relocation of Japanese Americans in terms of their own protection, and at 3:20 mentions that those forced to relocate “cheerfully” took part in the process. It was such a happy, smooth process, with the federal government helping out!

The implication starting at about 4:00 that “loyal” Japanese Americans were happy to relocate as part of their patriotic duty is particularly striking. Presumably, then, if you objected to the violation of your civil rights and treatment as a potential enemy of your country, you proved exactly why you needed to be relocated.

But don’t worry. “We are protecting ourselves without violating the principles of Christian decency.”

It's so much easier to lie to people when they think they live in a country where there is freedom of the press and speech.

My grandparents (and most of their rural community) were German immigrants or children of German immigrants, yet were not expected to relocate. Despite the fact that most spoke German in the home, for whatever reason they were considered "safe".

Yes, "It’s a great example of propaganda" for sure. The audacity of the positive spin is sickening. What is the truth ?...The gov and "whites" bank rolled off of the Japanese Americans, fear based actions perpetrated upon U.S. citizens, slave labor, evacuation at rifle point. This web site is awesome, keep up the good work.

Where were your family members located? Most of the Germans interned were from Coastal regions and because there was a significantly higher German immigrant population spread throughout the US, that internment operation proved more difficult -- they even interned German Jews who fled post-Weimar Germany.

My grandparents were in Illinois with some extended family in Wisconsin. My grandfather (a Lutheran minister) even tried to take a post in Africa as a missionary. He wasn't allowed to leave the country, but there were no other sanctions...and you'd have thought that would have put him under some kind of suspicion.

I like the Google ads that popped up while I watched, specifically "Date pretty Chinese girl."

Yeah, being in the middle of the country probably meant that they were deemed "safe" or whatever the term may have been.
Anyway, this has spawned a wealth of deeper interest in me. Thanks for the personal anecdote to better understand this. So much has been covered up simply by history and a series of layered interests and simple American forgetfulness.

Ha! How ironic that you publish your own piece of propaganda about a war, and about a West Coast situation, which you obviously know very little about. You need to study up first before making such claims of propaganda.

I remember the criticism toward Soviet propaganda while growing up. Propaganda -it seemed- did not happen on this side of the Atlantic. I was young indeed :(

Manzanar National Historic Site (right on US-395 on the eastern side of the Sierra Nevada mountains in California) is a fascinating, chilling place to visit. The NPS has created and curated what I consider to be a superb display on the internment of Japanese-Americans, from the history of the situation, to information about the camp, to the several-decades later apology by Ronald Reagan (!). While most of the buildings are no longer there, they have recreated one of the guard towers, right along the highway, and there is a brief driving tour to show some of the sites. The area is beautiful, but also harsh and desolate. Just sitting out there, thinking about being torn from your home in San Francisco, Southern California (George Takei, for instance, recalls being temporarily held in Santa Anita Racetrack before being moved to an internment camp), or anywhere else and then being brought to live in such a place is sombering and thought-provoking. I would recommend a visit to anyone passing by; entrance is free. I asked a ranger about that, and he commented "Well, we still get people visiting who were interned here, or their families. We certainly couldn't charge them to enter. And we absolutely can't keep an annotated list of those who were interned and check them off only if they match! So it is just free."