Pushing Back against Homophobia in Sports

Ilysse W. sent in a link to a story about a recent response to homophobia at a men’s volleyball match in Brazil, which she thought was particularly interesting given L.A. Lakers star Kobe Bryant’s recent homophobic outburst at a game and the conversations it has sparked about homophobia in sports. Bryant has been in the news for apparently calling a referee a “fucking faggot” (video at TMZ). The NBA has fined him $100,000, though Bryant says he will appeal the fine and that his words shouldn’t be “taken literally” (via ESPN):

The concern that I have is for those that follow what I say and are inspired by how I play or look to me as a role model or whatever it is, for them not to take what is said as a message of hate or a license to degrade or embarrass or tease. That’s something I don’t want to see happen. It’s important for me to talk about that issue because it’s OK to be who you are, and I don’t want this issue to be a part of something or to magnify something that shouldn’t be.

At a recent men’s volleyball match in Brazil, members of the crowd chanted “bicha”, the equivalent of “faggot,” at a gay player:

Afterward, due to media scrutiny, the player, Michael, publicly acknowledged that he is gay.

In a gesture of solidarity, at the team’s next match, the players wore pink warmup shirts, and one wore a rainbow-colored jersey: 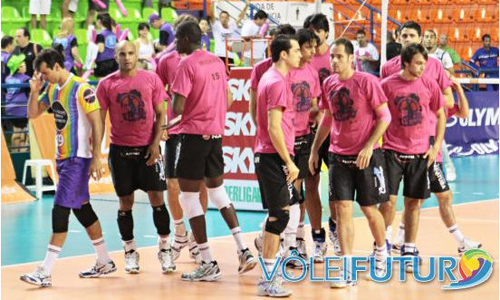 A banner was unfurled in the stadium that said Vôlei Futuro Against Prejudice, and fans held up pink thundersticks (noisemakers) with Michael’s name on them in support: 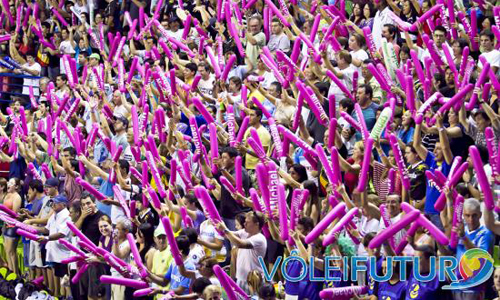 Meanwhile, back in the U.S., the Lakers say they are teaming with GLAAD to try to eliminate homophobic slurs in basketball. I suspect they’ve got plenty of work to do.

Glad he cleared that up. Otherwise I would have thought the referee was actually in the process of having gay sex on court during the game, hence the need for Bryant to make his observation.

[...] via Sociological Images: At a recent men’s volleyball match in Brazil, members of the crowd chanted “bicha”, the equivalent of “faggot,” at a gay player. Afterward, due to media scrutiny, the player, Michael, publicly acknowledged that he is gay. In a gesture of solidarity, at the team’s next match, the players wore pink warmup shirts, and one wore a rainbow-colored jersey…and fans held up pink thundersticks (noisemakers) with Michael’s name on them in support. [...]

The one in the rainbow-coloured shirt is the team's Libero. Liberos always wear a different shirt than the rest of the team. And he wore the rainbow shirt during the game. (http://blog.mattalgren.com/2011/04/brazil-stadium-turns-pink-after-faggot-chants-shock-community/)

Neither those shirts nor those noisemakers are pink.

I love show of support from the Brazilian fans and team.

That said, I think Kobe's fine was misguided, if it was for his choice of words and not for showing disrespect to an official. Simply because - what words could he have used that would not have gotten him fined? Why do homosexuals receive special protection?

As the recent post with Chris Rock showed, it is nearly possible to call someone an insulting name without being insensitive to another group. Stupid, crazy, moron, retard, nigger, faggot, Jew, bastard - nearly every insult began as either a medical or normal term for some disapproved subgroup and was later stigmatized due to its usage as an insult.

See the South Park episode, where "gay" had ceased to hold any meaning as an insult involving homosexuality, and was simply a synonym for lame (ha, there's another).

That said - on the sports front, winning trumps all. See the support Michael Vick gets now after his incredible season, or the fact that women in Pittsburgh still wear Roethlesberger jerseys. If a major, championship-winning, MVP player came out of the closet I think you'd get some grousing, but few people would want to kick them off the team.

[...] for gay rights by male athletes is also happening at institutional levels. Back in April 2011, Sociological Images reported on a Brazilian volleyball team’s public support for their gay teammate. More recently, [...]