Sonita M. sent in a link to an image at GOOD that shows the makeup of the U.S. Senate and House of Representatives now in terms of various characteristics (race/ethnicity, gender, political party, religion) and what it would look like if its members were more demographically representative of the U.S. population as a whole: 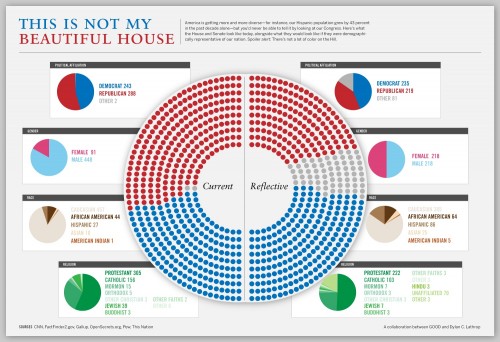 As they point out in the accompanying article, however, the area where Congress most differs from the U.S. population as a whole is in terms of socioeconomic status. The average wealth of members of Congress, according to OpenSecrets.org (they don’t specify if it’s the mean or the median, so I presume it’s the mean): 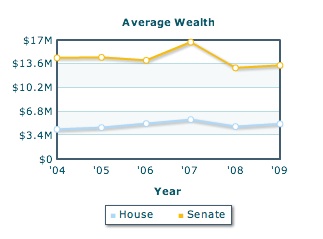 What I find particularly fascinating is how people in the Congress are so unlikely to declare themselves as having no religious affiliation, compared with the rest of the population.

I'm surprised to find that the congress is almost more representative in terms of race (68% representativity for african american, 40% for asians, 30% for hipsanics) than in terms of gender (ab. 40% of real proportion), when i would have expected the opposite. Hispanics seem to be the ones suffering most in distances from reality, though.

The average wealth statistic for members of the house is the most staggering to me. I would like to know what the max and min are, or at least some idea of the distribution. Perhaps this is why so many congresspeople have no grasp of what a living wage actually is in this country. Particularly those spouting off about how luxurious a teacher's salary is...

I know this can be more difficult, but it'd be great to see the numbers and visuals for sexual orientation and gender identity.

Err, I meant "many more sexual orientations and gender identities" (which I accidentally smashed together into "sexual identities")

UMLUD I think Hispanic and Latino/Latino is so confusing that if anyone actually tried to figure it out we would have to put an end to this sham called race. Hispanic is certainly an ethnicity because there are white, black and just plain 'hispanic' [the brown skinned, black haired chiquita banana in our collectice consciousness] people who identify as Hispanic. And yet they are markedly separate from just their race because of the shared culture and language. And yet we classify Middle Easterners and Arabs as white, something I still can't wrap my head around...

I live in Michigan, there are large enclaves of Arabs and Middle Easterners, especially in Dearborn. I went to school with many; on administrative forms, there is no "Middle-Eastern or Arab", it is simply "white". I've had many conversations about this with Arab friends, especially because many can "pass" for white and so they consider themselves to be both white as well as Lebanese/Jordanian/Iraqi/Iranian/etc. Many Persians that I have spoken to identify themselves as white and NOT Arab, specifically.

I'd love to see some future legislation mandating specific demographics in the house to reflect actual realities. Maybe a sort of jury-duty style lottery whereby members of the population are randomly selected to serve for a term. It seems a lot better than the charisma contest that is representative democracy.

The assumption here is that having a Congress that mirrors the demographic distribution of the population at large somehow makes the Congress 'better'. This is an idealistic fallacy that constitutes part of the classical understanding of democracy. It stems from a misunderstanding of the term 'representative'.

When you assume a good Congress from demographic mirroring, you also assume that a person's political views - and, more specifically, their political representations within the House - are a direct product of their social characteristics. While predictable partisanship is regularly true, it's the weakest it's been in some time. This view discounts the socializing effects of party machines and the constituent recruitment process. Further, as one of the commenters on the original article pointed out, how can you expect Congress to be 'representative' if only 1/2 to 2/3 of citizens vote?

what about age? the grand majority of both houses is baby boomer aged - not at all representative of my gen-x self, much less any of the younger folk. how different would our legislation be if it were proposed by people who still had decades left in the workforce vs those at retirement's doorstep?

[...] by this one particular demographic, even though it’s not remotely representative of our actual citizenry. There certainly have been exceptions such as the recent election of Barack Obama as the first [...]

On the religion pie chart, where are the Muslims? According to the CIA world factbook, 0.6% of the US population is Muslim, which rounds out to three members if Congress were representative. Have they just been lumped under "Other Faiths"? To do so seems unfair given that Buddhists, Hindus and Other Christians would also be represented by three people, and yet are given their own categories.

It would be interesting to see this broken down by state.

[...] a legacy are profound. Years of disenfranchisement leads to a foundation of legal precedent and accumulated power that perpetuate disparity and injustice. It’s no coincidence that that the Senate is still 96 [...]

[...] a legacy are profound. Years of disenfranchisement leads to a foundation of legal precedent and accumulated power that perpetuate disparity and injustice. It’s no coincidence that that the Senate is still 96 [...]

[…] by this one particular demographic, even though it’s not remotely representative of our actual citizenry. There certainly have been exceptions such as the recent election of Barack Obama as the first […]

[…] of disenfranchisement leads to a foundation of legal precedent and accumulated power that perpetuate disparity and injustice. It’s no coincidence that that the Senate is still 96 […]