If you’re interested in cultural representations of Native Americans, I highly recommend the blog Native Appropriations. Recently Adrienne K. posted about an article in a student-government-funded newspaper at Cal State U.-Long Beach that stands out for its disrespectful, hostile tone. The article, titled “Pow Wow Wow Yippee Yo Yippy Yay,” was a “review” of the annual powwow sponsored by the American Indian Student Council. It had never occurred to me that you would review a cultural event as though it were just another form of entertainment, like a new movie, but that’s the least of the issues here. The full article, from the Union Weekly (via OC Weekly): 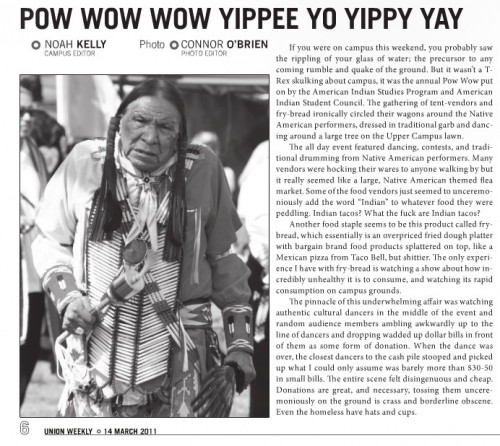 …it really seemed like a large, Native American themed flea market. Some of the food vendors just seemed to unceremoniously add the word “Indian” to whatever food they were peddling. Indian tacos? What the fuck are Indian tacos?

…like a Mexican pizza from Taco Bell, but shittier. The only experience I have with fry bread is watching a show about how incredibly unhealthy it is to consume, and watching its rapid consumption on campus grounds.

The entire scene felt disingenuous and cheap. Donations are great, and necessary, tossing them unceremoniously on the ground is crass and borderline obscene. Even the homeless have hats and cups.

I flinched several times while reading the article. I grew up in Oklahoma surrounded by Native American cultures, both because I lived in an area where several tribes were very visible and because my mom is part Cherokee herself and several close relatives married people enrolled in other tribes. Even though I know that in most of the U.S. Native Americans are often culturally invisible and most people haven’t gone to tons of powwows or sat around watching the women in the family sewing ribbon shirts in the living room, I still sometimes forget that these things aren’t instantly recognizable and interesting to other people, or that they could see something that I was taught to be respectful and appreciative of and have such a different reaction.

Of course, this article goes beyond being unfamiliar or uninterested. The author, the paper’s campus editor, clearly didn’t want to learn what was going on. I mean, even if you’ve never heard of one before in your life, just a minimal Google search will explain to you than an Indian taco is, more or less, a taco on fry bread (the Osage Nation even has an annual competition). An image of a dancer is used to highlight a mocking, mean-spirited “review,” as though the powwow’s only function was to entertain uneducated outsiders.

The Union Review and the author of the article issued the typical non-apology “apology” statements — we’re just here to let all sides of the debate have a voice! We’re sorry if anyone got themselves all offended, we really didn’t expect this reaction at all! — which is also available at the OC Weekly link above.

As Adrienne points out, though the “Asians in the library ” rant from a UCLA student got a huge amount of attention, there’s been much less about this. It highlights the point Tami made at What Tami Said: overtly disrespectful and/or racist behavior on campuses shouldn’t shock us, if we’re paying attention.

This is especially appalling at a campus like CSULB which has has a contentious relationship with Native Americans through the mid-1990s; the campus is built on the grounds of the Puvungna village, and the local tribal authorities had to actively fight the development of a strip mall in this location between 1993 and 1995.

"a taco on fry bread"

That said, anywhere there are vendors is probably open to a review, in my mind. If you're expected to spend money, you're okay wanting to know if it's "worth" it. Doesn't excuse the tone, obviously, but this article COULD have been done respectfully.

If the former, then I do think a review is appropriate -- and I think it would be legit for a review to include negative comments (otherwise it's not really a review).

But like Scapino said, you can review something with respect (which includes doing a modicum of research -- at the very least googling things!), and the "reviewer" clearly failed on that count.

What I'm curious about is the last paragraph--is that kind of "donation" typical after or during a traditional dance? Were donations solicited? Or was the dollar bill tossing itself a indication of students' perception of the event as entertainment?

If the latter, than perhaps the student writer did have a bit of cultural sensitivity when he(?) found it (the bill-tossing) crass. On the other hand, his statement that he found the whole thing "disingenuous and cheap" perhaps speaks to his own expectations of what "real" Native American cultures ought to be.

The article's title is referencing the "bowwow wow yippee yo yippee yay" line from a song, "The Wild Wild West." I think this is completely unimportant, but I wanted to point it out.

In my opinion, what is being missed here by some is the fact that this is not a "commercialized festivity" to those of us who ARE Native American. I was a women's traditional dancer at powwows here in Michigan for years. Health issues keep me from going to many now but I still go when I can. To the people I know, this is a way of enjoying ourselves and coming together. We visit, laugh, talk and learn from each other. I have no problem with people coming to watch and learn though. I would rather people ask questions and learn from us, than keep assuming they know who we are.

Yes, there are vendors. Many of them barely make enough to pay their way there and home. Putting on a powwow is not free. Admission may be charged to pay for event insurance, port-a-potties, licenses needed etc etc. The vendors pay a fee to be there. Many times vendors are selling things they made themselves and trying to help support their families. Some vendors may be selling beads, or other supplies that many of us may purchase for use on our regalia. So the vendors are there for the participants as well as whoever may be there just to watch.

When I go out in that circle in my regalia to dance, I am doing so for me. I don't care who is looking, watching etc. The drum resonates through me and I move as if the people in the circle are the only ones who exist for me at that time. (To anyone wondering about the clothing: regalia, outfit, traditional clothing are all correct terms, costume is NOT.) The powwow is for US and not designed as a vehicle to entertain others. The public is invited as a way to share information about us. That is a token of friendship. An invitation to have a window into our lives, NOT a performance for you to watch. After the public leaves, sometimes we keep on dancing for a while. Sometimes we sit around campsites and/or fires and sing, laugh, talk, tell jokes. If you are invited to stay and visit with a family and/or group then you are very very lucky.

I have been stopped at many powwows by those wanting to ask questions. I answer the best that I can. Sometimes I am asked things that I would never ever think to ask another person in ANY culture, but I do my best to be respectful and kind. The MC often shares information during the event in an attempt to educate also. It's a good idea to listen and also to read the program if there is one.

All in all what I am saying is this. When attending a powwow (yes even if you paid a fee to get in) you are being invited into our "home" for the weekend. Would you go into a friends home and ridicule them? Would you laugh and denigrate them or would you stop and ask them about things you didn't understand. To us this is what we are doing, inviting friends into our home, even if it is just our home for that weekend. We are not performing for you. We are dancing for ourselves and our families.