Coercive Sterilization? Think of the Children!

In early 20th century America, eugenics was promoted as a new way to scientifically shape the human race. The idea was to change the human population for the better through selective breeding and sterilization. As you can imagine, this led to serious abuses. People of color, the poor, and those deemed otherwise unfit for reproduction were disproportionately targeted, and usually the sterilization was accomplished by targeting women’s bodies in particular.

One interesting facet of the effort to promote eugenics is the language used, or the framing of the issue. Indeed, just last week I introduced my students to the notion of “Birthright.”  The term birthright suggested that all children have the right to be born into a sound mind and body.  Why was it important to sterilize individuals deemed morally, culturally, or biologically inferior?  Why, we must do it for the children, of course!

I was reminded of the idea of children having such a birthright by a vintage ad (posted at, predictably, Vintage Ads).  The ad is for a school designed to improve the future of the human race by improving parenting.  The school would, therefore, teach parents how to engage in civilized “intelligent” “parenthood.”  The idea that such parenting can be taught points to the way that eugenics evolved from a biological to a cultural basis.  And in several places you see the term “birthright” (excerpted below). 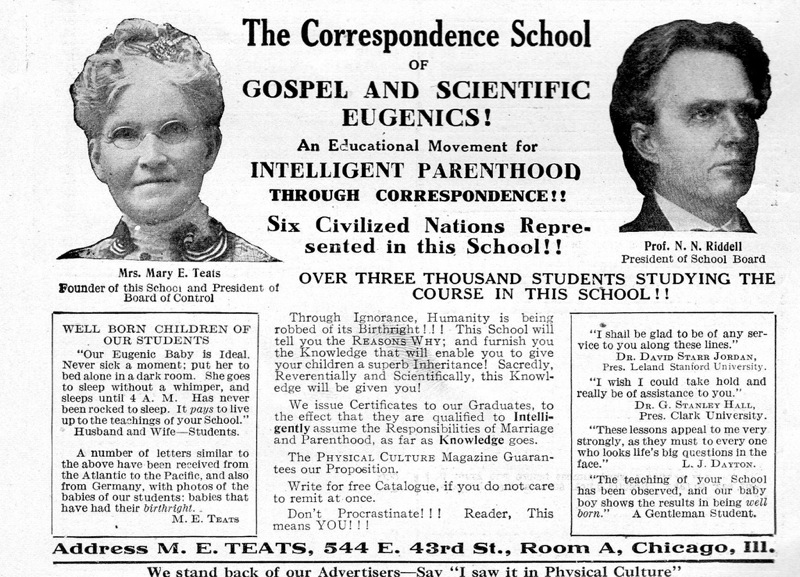 For a time, pro-sterilization laws were very popular.  The U.S. map below, for example, shows which states had pro-sterilization laws in 1935 (striped) and states with laws pending (black). As you can see, most of the United States was on board at this time.  Later, condemnation of the practices in Nazi Germany would take the blush off of the eugenics rose. 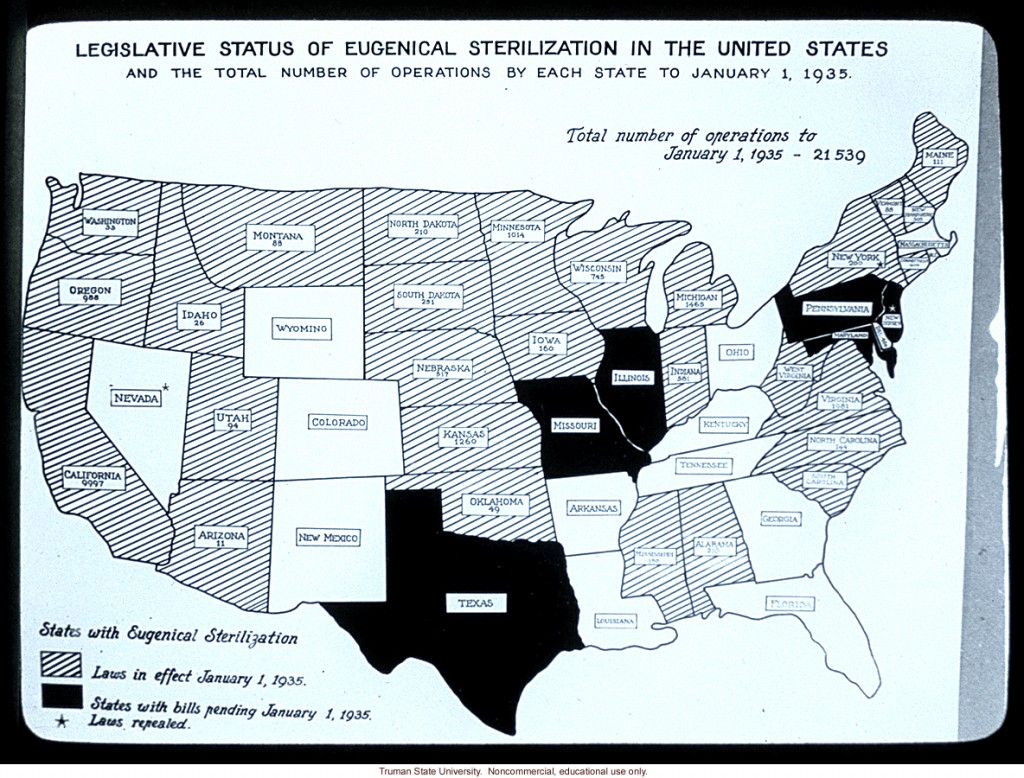 For a wonderful book on the history of eugenics, read Wendy Kline’s Building a Better Race: Gender, Sexuality, and Eugenics from the Turn of the Century to the Baby Boom.

For more on eugenics and sterilization, see our post with additional pro-eugenics propaganda and two contemporary examples of coercive sterilization campaigns by your health insurance carrier and politician who’ll pay the “unfit” to get tied.

I have no information about the courses other than this ad, but it doesn't seem to be that they are promoting coercive sterilization. The endorsement/testimonial on the left seems to come from parents who have presumably taken this course for the child they already have. The tagline says it will "give your children a superb inheritance". It isn't really "selective breeding" if you are advertising a series of parenting courses to people (even though the 6 "civilized nations" thing is pretty irksome).

The post talks about targeting the poor and people of colour, but the ad doesn't do this; it speaks to parents and maybe potential parents. It calls itself a school of parenthood. The concept of birthright may have been abused, but there is nothing wrong with striving to provide children with health and opportunity. This doesn't strike me, as it stands alone, as any more offensive than those baby Einstein DVD's etc.

[...] Coercive Sterilization? Think of the Children! — Some peculiar and discomfiting reading. [...]

But of course there is this: http://www.suite101.com/article.cfm/pregnancy_childbirth/63063

American Indians were a prime target of these programs. See Joseph Bruchac's YA novel, HIDDEN ROOTS. On my site I discuss his novel and more recent gov sanctioned sterilization programs. Once at my site search on Hidden Roots.

While I think coercing people into being sterilized is wrong, I think it's even more wrong that doctors consistently deny women the right to be sterilized if they haven't had children. I am childfree. I don't want to ever have kids, and I'd like to be sterilized in the future to make sure that I don't have an accidental pregnancy. However, most mainstream doctors will refuse to perform elective sterilization on a woman who hasn't had children and patronize her if she asks, telling her she'll regret it later. It's wrong to force people to be sterilized if they're "undesirable", but it's even wrong to tell an adult woman that they're not informed enough to make decisions about their own bodies. Our society is so pro-natalist, it's disgusting.

So I'm supposed to be offended that people wanted to take courses to become better parents? I wish that happened now.

BWAAHAHAHAHAHAHAHAHA I watched the source link... Bill Gates and his mysterious
'vaccines'