Clayton W. sent us a political mailer that recently went out against Rose Ferlita, a candidate for mayor of Tampa, Florida. What makes her unfit for office? Among other things, she’s single: 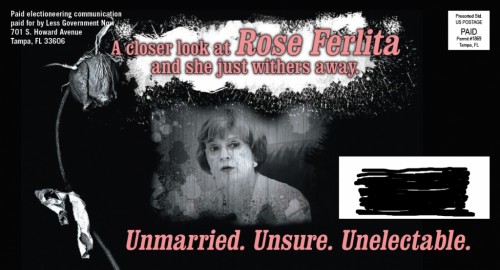 Text from the other side: 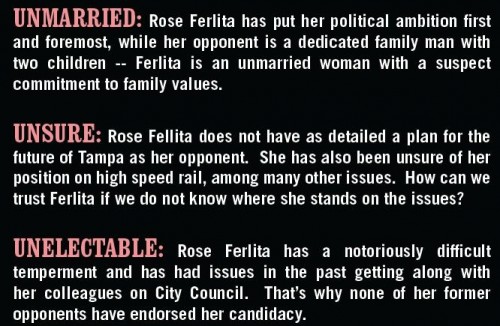 So, awful, right? She’s single, she has a “suspect commitment to family values,” which I think it isn’t a stretch to say means “she might be a lesbian,” she’s a bitch. Given our current political alignments, we might legitimately assume this mailer was created by a very far right, possibly religious-based group, presumably on the conservative side of the spectrum.

But the story turns out to be weirder than that. Ferlita is a Republican, though Tampa’s mayoral races are non-partisan. The mailer, as you can see in the return address, is from Less Government Now, a 527 political action group (that is, one that can take unlimited donations as long as they do not directly advocate voting for a specific candidate). And it’s tied to a man named Scott Maddox, a Democrat who ran (unsuccessfully) for office last year. In that race, he had a friend enter the campaign as a fake Tea Party candidate in hopes of splitting the Republican vote.

It appears that Less Government Now is pursuing a similar strategy here, sending out materials that attack candidates from the right by coming up with the types of arguments they imagine will resonate with very conservative voters and thus split their vote. It doesn’t seem clear whether the other candidate for mayor of Tampa, Bob Buckhorn, had any knowledge of the mailer, or if Less Government Now acted on its own (Buckhorn has denounced the mailer).

I gotta say, I thought this was repugnant when I first saw it and assumed the group who put it out might actually believe this kind of crap. But to encourage people to vote based on sexist, homophobic values that you presumably don’t even agree with, simply as a political ploy? That is some nasty, nasty business.

UPDATE: Suzie emailed us about her post on March 20th at Echidne of the Snakes (there’s no way to link directly to the post, sorry) questioning the origin of the mailer. The St. Petersburg Times Tampa Bay site reports that according to the post office, the permit number listed on the mailer is fake, and there’s no evidence it was actually mailed. Less Government Now denies all knowledge of it. It’s possible that this is a fake mailer created to discredit the Democratic candidate by making it look a Democrat-affiliated group sent out something sexist. The person who first made it public, claiming to have received it anonymously, has been involved in political consulting and has a history of criminal charges. This is all making my head spin.

Could it potentially be a subversive ad to make republicans and tea partiers look bad? Remember that your initial assumption was that it was a sexist attack against a democrat. The ad would be a good way to motivate democratic voters because its so offensive.

This seems unconscionable- whatever the secret strategy is here, this flyer is encouraging the worst sort of retrograde, sexist stupidity, and it's difficult to imagine ends that justify those means.

I haven't followed the election, so conceivably it could be some sort of attempt to turn the candidate's hypocrisy on herself- if she had been making a lot of 'family values' based attacks on queer rights or single mothers or what have you- but even if that were true, an ad like this just encourages the thinking that supports those kind of attacks, and winds up perpetuating the problems.

I agree. The only way this could be remotely acceptable is as a parody. Regardless of who's behind it, it's offensive.

So many things about it bother me that I don't even know where to begin. Gwen mentioned a few already. Underneath the whole "unmarried" thing is also the implication that only married people can have children and that married people *must* have children.

It's also one of those no-win sort of situtations for women. You have to have children to prove you respect "family values", but don't you dare get too distracted by those children because then you won't do your job very well; of course, you can't neglect them, either, because then you're a bad mother.

For women particularly, it's a lose-lose situation.

Even if she was married and had children, the message would simply be, "SHE NEGLECTS HER POOR FAMILY FOR A CAREER IN POLITICS! HER CHILDREN ARE FERAL AND HER HUSBAND IS OVERBURDENED WITH DOMESTIC DUTIES! SHAME, SHAME!" -- I know this article is about a left-wing party tailoring terrible, sexist messages that attack a right-wing candidate, but I'm more concerned about the perceived legitimacy of the vector of attack than I am over who's sending it.

Oh, and does anyone else think that the withering rose imagery is a subtle attack on her age? Because, you know, older women can't possibly be sex objects, and are therefore useless (and possibly threatening)!

Well, the Left is famous for throwing women under the bus whenever it's convenient, and only championing our rights when it makes 'em look good, so...gross, but ultimately unsurprising.

Why is it that they have to specify that she's "an unmarried woman"? Couldn't they just say "Rose Ferlita is unmarried, etc. etc. "?

Wait, why do did even bother asking that.

I don't see anything wrong with the ad itself (I'm putting aside all of the fake-candidate drama attached to it). If there is any problem, it is not with the ad but with popular opinion.

The reality is that for many Americans (and in some regions, maybe even a majority) the marital status or family arrangement of a candidate is incredibly important. Socially conservative voters make up a large percentage of the electorate in most states, definitely in Florida. So what is wrong with a candidate drawing attention to this issue? Do voters not have a right to know these facts and base their electoral decision upon them? If anything, it is brutally honest - usually attacks like these are veiled in innuendo.

So I only see a problem with this in as much as it reflects the deep social conservatism of a huge swath of Americans. But, I don't see any problem with a candidate putting this ad out. The democratic process in this country is designed such that individuals can vote for whatever reason they want - including racist, homophobic or sexist beliefs. That may be incredibly distasteful or unacceptable to a great many people but then the debate is not over an ad like this but over the democratic process in our nation and over whether certain types of speech should be sanctioned or restricted by our government.

Why are people so shocked to hear Democrats using dirty tactics? Both wings of the Capitalist Party will do whatever they can to get votes in this two-party system. True, Democrats will support women and labor and "the people" when it fits into their agenda of gaining power, but there's been plenty of dirty work on behalf of Democrats since their beginnings and yes, since the New Deal.

Isn't that "temperament" and not "temperment?"

WHAT THE FUCK. That is all.

Forty years after Lee Atwater invented this crap FINALLY these people get a taste of their own medicine. Look at Wisconsin, look at Ohio. Look at both Bush terms. If it takes stunts like this to split the stupid vote so sane people can get elected, so be it. We have seen the alternative and it is poverty and war. Defunding Planned Parenthood. Either be ready to use these peoples' ignorance, racism and low critical thinking skills against them. or accept that Phyllis Schlafly is going to set social policy in this country.

THIS ad is just small potatoes. What I REALLY want to see is tape of Jamie O'Keefe caught in bed with a sheep. Is it live or Memorex? Who cares??? Payback is sweet.

If the same exact ad were run about a man, what would we think? An
argumentative male politician can claim to be a "fighter" or a "maverick". It is at least harder for a woman to claim these labels, especially an unmarried woman.

If one is running on a platform of "family values" then by all means one's failure to live up to this is an obvious and legitimate criticism.

Indicted as an unmarried woman leaves it to the individuals personal bias to fill in her crime.
Is she a failure as a woman?
Is she a lesbian?
Is she unprotected and therefore vulnerable?
Is she selfish?
It seems to be a distillation of the articles that have been running in the media on a rotating monthly basis since the 1920s condemning women for failure to submit to their froggy overlords.

Republicans are also well-versed in this strategy:
http://www.austinchronicle.com/blogs/news/2010-08-11/servants-and-anchors/

[…] Sociological Images takes on the messaging in a political mailer criticizing a female Tampa, Florida Mayoral candidate for being unmarried. Seriously. […]