Kristina K. sent in a link to an interactive map at the New York Times that shows the results of Gallup’s 2010 polls of well-being. [UPDATE: Reader Danielle pointed out I forgot to provide a link to the map. Sorry! You can find it here.] Gallup surveys 1,000 people per day about a variety of indicators of well-being, including questions about physical, mental, and emotional health, various health-related behaviors, ability to access health care, access to adequate food and housing, and perceptions of their communities. Here are the overall composite scores, by congressional district (a higher score is better): 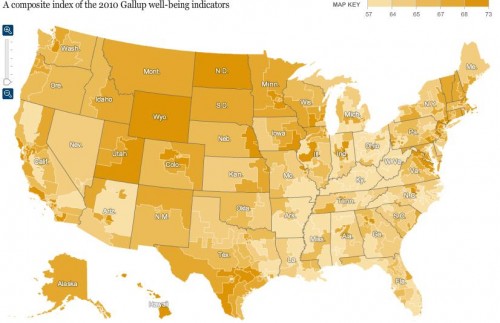 The general geographic pattern indicates a swath of relatively low well-being curving from Louisiana up through Michigan, while those in the upper Great Plains and the inter-mountain West are doing better than average. 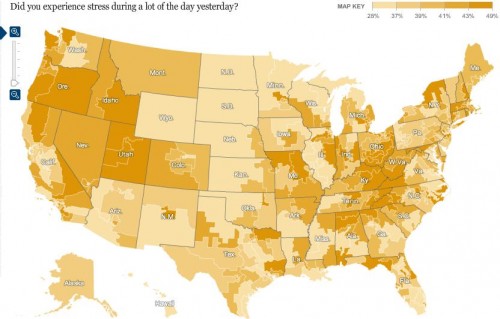 Percent who have ever been told they have depression: 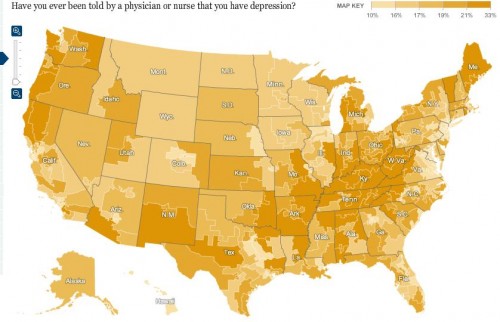 Percent of people who smoke: 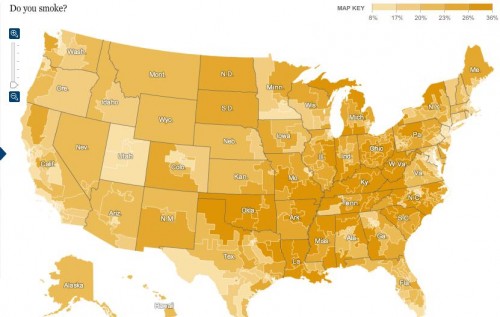 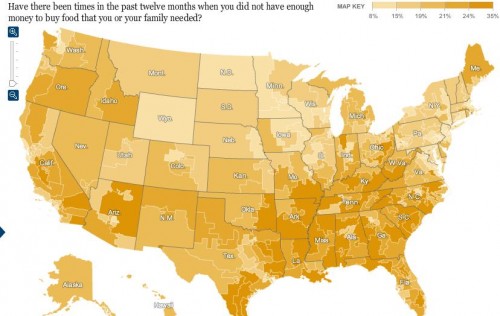 The Gallup page on well-being presents more data. Here is a map of 2009 overall well-being that is a bit easier to read since it’s presented by state rather than congressional district: 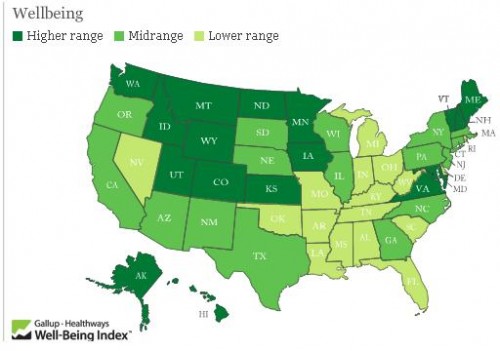 Hawaii had the highest overall score, at 70.2; West Virginia had the lowest, 60.5. If you go to their site and click on a state, you can get a breakdown of scores in each area (emotional well-being, physical health, healthy behaviors, and so on).

Finally, the NYT provides some demographic information on who was most likely to have said they spent a lot of the previous day laughing or smiling vs. being sad: 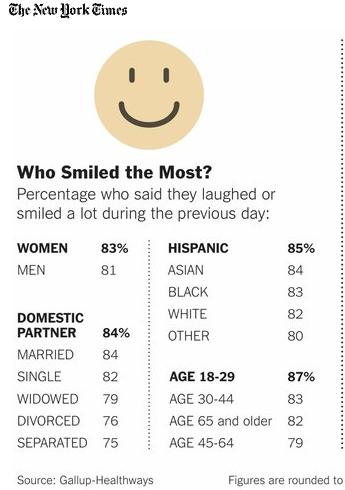 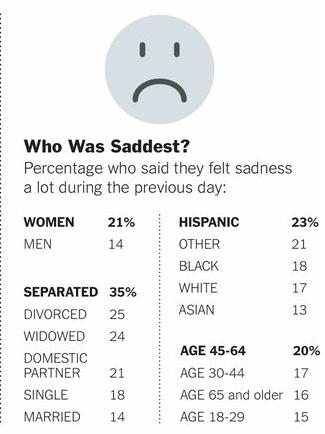 Women and Hispanic people are most likely to be both sad and smiling? Not that much of a surprise, I guess.

What a great post! interesting that neither Kentucky nor West Virginia has one single congressional district that isn't miserable. Considering the enormous quantity of weed grown in both states......

You should post (give credit to) the actual link to the interactive maps. I'd like to be able to zoom and have no idea where the originals are, other than somewhere on the NYT site.

LINK to the interactive maps, originally provided at the NY Times website:
http://www.nytimes.com/interactive/2011/03/06/weekinreview/20110306-happiness.html?scp=5&sq=well-being&st=cse

Why do you believe that the lower-resolution map is "easier to read since it’s presented by state rather than congressional district"? It hides some very important distinctions between coastal and inland California. The Congressional districts are closer to being the same size in terms of population, so presents a much clearer picture of the situation.

Is anyone else startled by how well Alaska is doing? I've always seen stats that indicated we had a lot of depression, suicide, alcohol abuse, etc.

[...] I’d Be Stressed If I Had To Live In Buckeye Country Here’s an interesting map of stress levels throughout the US. Courtesy of Sociological Images. [...]

With Maine as an example, does the transition from the overall state of well-being in 2009 vs the apparent disparity of data presented (e.g. depression rates + poor access to food_ undermine the validity of the study? Also, as a New Englander, I was surprised to see that those who live in Western Massachusetts reported greater stress than those who live in the greater Boston region. Given, Western Massachusett's liberal and rural reputation, perhaps those who responded to the survey had a relative conception of their stress levels.