In and around the apartment complex where we live in Nanning, China, there are no less than five coffee shops.  They are part of what make our neighborhood so much, well, like a neighborhood.  Several of them have free wi-fi and they all have finely crafted, good quality kafei (coffee).

But my wife and I have learned the hard way that if we want coffee in the morning, we either have to go to McDonald’s or make it ourselves.  While your average US Starbucks employee arrives at work before the sun peeks its head above the horizon, baristas in China report to work around 10 am.  And while some Starbucks and rare other coffee shops in the US are open until ten or even midnight (at the latest), their Chinese counterparts stay open until two in the morning every night. 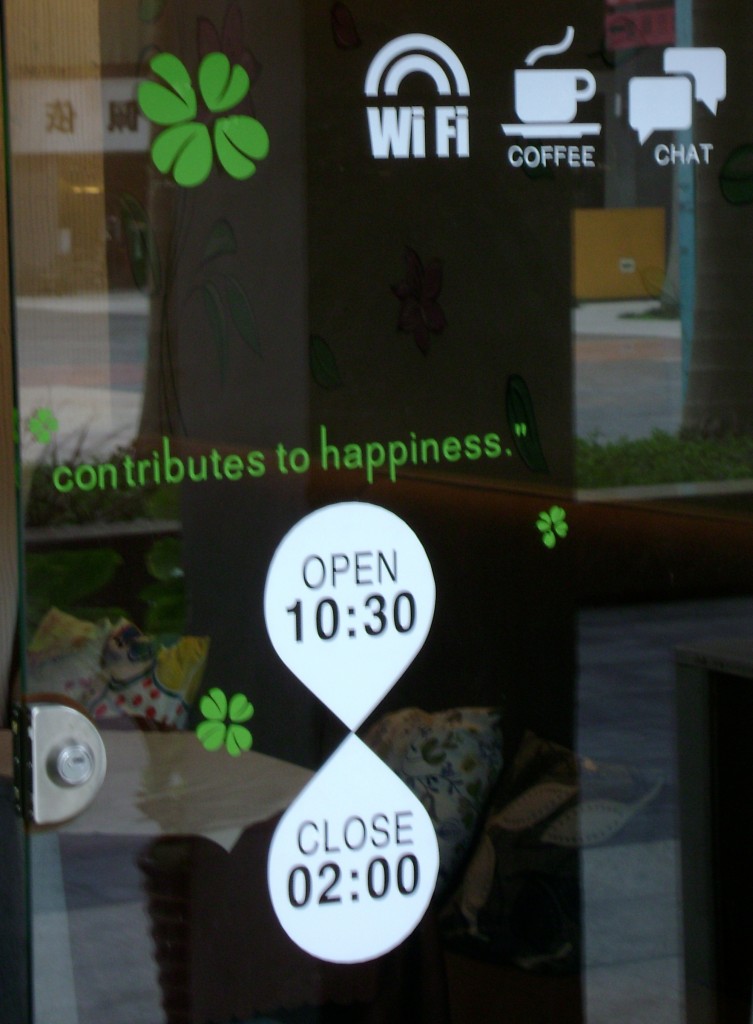 Needless to say we found these business hours confounding, and poked around to find out why anyone would want to drink such strong coffee (and, do not doubt, this coffee is stout!) so late at night.

As it turns out, China’s coffee history dates back to the early 19th century, but in all those years, coffee never “caught on.”  And it is not really a mystery as to why.  China’s tea culture has a centuries-long monopoly on China’s liquid ingestion.  Coffee?  Well, its OK, if you like that sort of thing.

But if for 200 years the Chinese have resisted coffee, why now are coffee shops finding enough success that there is room for five in one small neighborhood?  The answer is in the picture of my wife below.   Chinese cafes are dimly-lit, quiet, and “romantic” (or at least that is the goal of the decor) rendezvous points.  A new high school couple might take their xiuxi (afternoon rest – the Chinese version of a siesta), flirting with each other while sipping on lattes.  After a night out on the town, young couples flood the cafes, taking lots of pictures, drinking beer and maybe a couple of iced macchiatos.

The marketing scheme is actually quite impressive.  If you can’t win them over with quality, lovingly brewed, pristinely presented coffee, make the coffee shop a romantic oasis.  Draw them in with the promise of passion and mystery and win them over with brilliantly executed coffee.

The pictures are just a bonus.

Evan Schneider is a graduate of Princeton Theological Seminary. He teaches English at an education college in Nanning, China.  While in China he enjoys learning to cook Chinese food and discovering the differences between the way that Chinese and American people think about food.  He blogs about it at Cooking Chinese.

typo: baristas not barristers
(unless the person making the coffee also speaks in law courts? :) )

I admit to never having been in the area of Princeton, but considering the number of 24-hour Starbucks and other late-night coffeehouses throughout the U.S., I'm having trouble being surprised that Chinese counterparts stay open until 2 a.m.

As for whether iced macchiato is possible, well of course it is. Macchiato merely means the drink is 'marked' or 'stained' with milk. Although it's common in the U.S. for it to be foamed, that's not the definition.

I think it is important to note that coffee shops in China tend to use English signage (including the one pictured in the post). I think this adds to the ambiance of the cafe being Western and therefore "modern" and "hip".

Or, maybe it’s the Chinese looking westward? Or, the increased cultural influence/contact with the West (through business, movies, etc)? Is this increased interaction contribute to the young middle-class replicating their western (urban) counterparts habits? (differential association?/ differential identification? you tell me)
It is no coincidence China is becoming a major world power, and its citizens are having more interaction with the western world, and they recently developed a taste for wine (look it up in the NYTimes) and apparently, coffee as well.
There is more to this than "oh, this place is cute." A cute place doesn’t change 200 years of culture.
I know this isn’t a journal but seriously this is the foundation of a "D" paper in an undergraduate culture class.

I'd kill for a coffee shop open past midnight. no one caters to nightowls :-p

I read a book, titled "Culture Code" which was written by a top marketing executive who claims to be responsible for coffee finally catching on in Japan. According to Rapaille, children by the age of five are imprinted with their impressions of the world around them. So instead of marketing cups of Joe, companies shipped coffee flavored candies overseas- to hook children (coffee adult addict hopefuls) on the flavor. I believe Nestle did this in Japan- but I imagine they were eager to open Chinese markets too....

I have to agree with tom and md that this post is seriously lacking a transnational analysis of power and privilege. Coffee is, and has always been, a colonial enterprise linked with whiteness. Coffee's growing popularity in China is evidence of a kind of globalization (read, neocolonialism) that privileges white people and their habits, and links both with "modernity" and "development". To fail to see this, and merely see coffee shops as attractive because they are "romantic" is to miss the bigger picture:
"But if for 200 years the Chinese have resisted coffee, why now are coffee shops finding enough success that there is room for five in one small neighborhood? The answer is in the picture of my wife below."
Indeed, but perhaps it is in her racial privilege, and not her coffee cup!

Oh, another of those White folks going to the East and lamenting about marketing schemes and ploys and talking about the unavailability of "quality, lovingly brewed, pristinely presented coffee" in the same breath as the US multinational chain called Starbucks. Starbucks!!