Doing Nothing: An Experiment in Norm Breaking 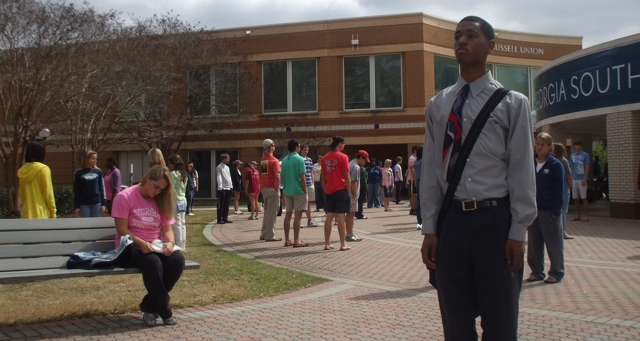 What is a norm?  How important is it that we follow them?  And what happens when we break one?

Nathan Palmer, a lecturer at Georgia Southern University and founder of the blog Sociology Source, recruited his entire class of 262 students to go into the world and do nothing (an idea he borrowed from Karen Bettez Halnon).  It was sort of like a flash mob in which absolutely nothing happens.

Palmer’s aim was to reveal a norm (in this case, that we all must always be doing something), expose his students to the feelings one has when breaking a norm (even a consequence-less one like this), and show them the range of reactions that observers have to norm breaking.  And he recorded the whole thing for us:

Read Palmer’s entire write-up of the experiment at Sociology Source.

I can't few the video, so I'm responding only to the text above, but couldn't you argue that the students are actually doing *something*, i.e. standing still? Is it ever possible to literally "do nothing"? Even when they are standing still. i.e. 'doing nothing' they are still participating in a sociological experiment (not to get all Devil's Advocate-y, but... yeah).

Also... I'm sorta getting tired of the flash mob stuff. It's a lot more "refreshing" when it's actually humanity doing human things.... Like the snowball fight in Times Square a little over a year ago.

I've been doing this for years whenever I go to a medical appointment.

The expected behavior in a waiting room area is to read a magazine, talk/text on the phone, or at the very least watch the television if one is available (I REALLY hate blaring televisions in public spaces).

I prefer to take the opportunity to sit and practice my breathing. I'm always amused by the varied reactions I get when I do this.

My uncle from Nairobi visited my family here in D.C. for a week. When I ask him what was the most note worthy thing he noticed about America, he responded "there's a lack of non-motion", he said that nobody seems to just sit and do nothing. The concept that we have to pull out a book or a phone when we wait for something seemed to bother him. I thought the video touched on that strangeness he observed, but as the previous comments pointed out, these people are doing something.

Peopling staring and wondeing what's going on was to be expected. If someone is doing something odd, you're curious, that's just human nature. However, I was vert surprised by some of the anger I saw. Like the two woman at about 2:49 who cornered the other woman to taunt her. It was really sureal, because this is a fellow woman, a fellow classmate, who is doing NOTHING, why go out of your way to mess with them?

I feel that this may be more effective as an experiment if they only had one person do it rather than a large group. The large group does create the flash mob feel, and flash mobs have become well-known enough that there is kind of a societal norm in place as to how you respond to a flash mob.

If it was just one person, they would be more likely seen as a freak or a crazy person, I think. With a group, it's assumed there is something bigger going on (they're being punished, it's a class, etc).

I thought murder and bank robbing were breaches of taboo rather than more?

Palmer’s aim was to reveal a norm (in this case, that we all must always be doing something), expose his students to the feelings one has when breaking a norm (even a consequence-less one like this), and show them the range of reactions that observers have to norm breaking.

In most semi-public places in the U.S. (such as shopping centers, parking lots, etc), "doing nothing" is a crime, and has real consequences. It's called "loitering" and there are often signs posted warning people not to do it.

A friend who grew up in Europe but now lives here in the U.S. once told me about how utterly bizarre the concept of the crime of "loitering" was to her when she first got here, and the more I thought about it the stranger it seemed but until it was pointed out by someone who grew up in a different context I hadn't really thought about it at all. I'd just always somehow known that I had to keep "moving along" because there are apparently only three types of space I'm allowed to occupy: My residence (the only legal place to loiter besides the occasional park bench), a place where I'm consuming something, or travel routes between places to consume things. If I'm on a travel route, I must keep moving or I will attract the attention of someone who will encourage me to keep moving. If I'm at a designated consumption spot such as a restaurant or store I must be actively engaged in consuming or I will attract the attention of someone who will encourage me to start consuming or move along. If I refuse to do either one I will be forcibly moved and possibly fined.

After all, doing nothing doesn't make anybody any money which is probably why it's illegal in so many places, and desiring to do nothing probably also means I'm some kind of freak and no one wants freaks hanging out near their place of business. Never mind the fact that private commercial spaces are sometimes so extensive that they become the de facto commons which effectively makes it illegal to be in public without buying something or being on your way to buy something (or at least looking like you are). That seems to be the trend, and it's virtually identical to the goals Disneyland is designed to accomplish in terms of crowd control and revenue extraction that I mentioned in a comment on the recent Disneyland post (I suspect they are directly related since the Disney corp. researched the subject for decades and originally developed many design guidelines for highly controlled spaces full of gift shops that are now widely implemented).

"Doctor Who" and "Torchwood" have used the degree to which most British/British-like cultures are unnerved by this to great effect in a couple of different episodes.

Interestingly, Japan (as in Zen) is so anti-loitering that their laws make it nearly impossible to have benches on sidewalks or cafes with outdoor seating. Sidewalks and streets are for motion. http://search.japantimes.co.jp/cgi-bin/fl20101010x1.html

Unfamiliar with the "frozen grand central" flash mob in 2008? flash mobs are becoming a new norm in themeselves. this would have deviated from the norm if there were not cameras, video and audio on site to document the occurrence. Especially at a college campus, anyone exposed to both the internet and a frozen flash mob would likely just assume, "oh this is just some weird stuff for the internet. i'll just keep doing whatever i was doing."

I appreciate the point of the experiment. The theory behind it I believe is sound. The fashion in which the experiment was performed was not thought through carefully enough, I believe. Agreeing with most of the people posting before me, if there was less of a sense of organization, the reactions from the passers-by would stem more from noticing a complete lack of activity, rather than a group participating in an activity (even if that activity is "doing nothing").

Good experiment done by you to define "doing nothing". I appreciate it.

I was surprised at how in your face some of the people who saw them were. I think in England people would react differenty. They would more likely just pretend nothing strange was going on and ignore them. That's what people do on the London Underground when someone is acting strangely. I think here they would be mildly amused, think it was some kind of class activity and go about their own business.

Agree absolutely with the flashmob/performance comments. Also, I think one of the reasons this behaviour seems 'off' is that they are standing in the middle of the walkways. Other people are having to manoeuvre/detour to get around them.

If you were in that space and genuinely wanted to relax or think/meditate, would you stand in the middle of the walkway? Even if (hypothetically) the building was closed down for the day and you knew nobody else would come along, it is quite unlikely you would choose to stand stock still in the walkway. It's more likely you would walk slowly around, or sit on the bench, or sit on the grass, or lean against a wall. Standing frozen in the middle of a walkway like that doesn't look like something anyone would genuinely want to do in in a normal situation.