Thelittlepecan let us know that the World Health Organization has out a new report about global alcohol consumption, as well as the consequences of that consumption. Overall consumption varies significantly, with the highest levels in Russia and much of Europe and the lowest in northern Africa through Asia (the consumption figures exclude tourists): 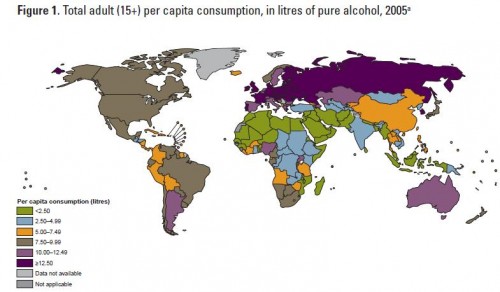 There are also clear differences in the most-consumed type of alcoholic drinks: 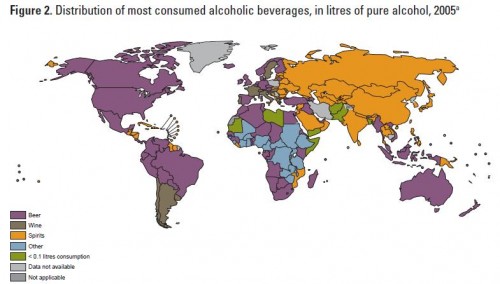 The report also looks at what proportion of all male deaths are related to alcohol consumption, broken down by region, age, and sex. Globally, alcohol-related problems are the leading cause of death for males aged 15-59. For the regions, AFR = Africa, AMR = Americas, EMR = Eastern Mediterranean, EUR = Europe, SEAR = South East Asia, and WPR = Western Pacific: 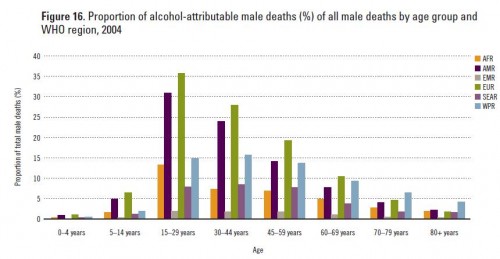 Clearly the Americas and Europe stand out, though this is  likely because those regions have lower death rates from many sources that are still prevalent in many parts of the world and, thus, alcohol-related ones show up more prominently.

Differences in blood-alcohol limits for drivers: 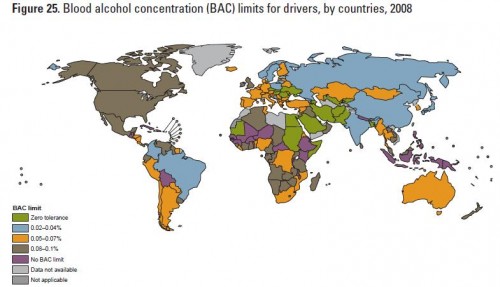 If you’re interested in more details, you can also get profiles of individual countries in each region at the WHO website.

I'm surprised you left out Figure 7. Although many parts of Europe drink greater quantities of alcohol, that figure suggests that North Americans engage in "riskier" (as defined by the study) modes of drinking. For example, a glass of wine with lunch and dinner every day (14 drinks) is likely going to be less harmful than 10 drinks in one Friday night.

Figure 2 breaks it down by beer, wine, spirits, and "other." What qualifies as "other"? Something they like in Africa, apparently...

Proposal for the U.S.: lower the drinking age to 18 and the BAC level to .06. Seriously, America.

I really dislike the way they chose random colors even for the graphs that involve increasing levels of things. A gradient of the same color would make it much clearer at a glance which countries are higher or lower, instead of having to refer to the key repeatedly.

Here's an interesting piece from Malcolm Gladwell arguing that how we drink is just as important as how much we drink...

[...] World-Class Drunk: Can you guess which countries drink the most? The U.S. certainly has some stiff competition. (Sociological Images) [...]

Good to know Ireland, though outside the top 10 on total consumption, got the Gold in "Heavy Episodic Drinking"

[...] nasty play about values and moral on how drugs are bad while alcohol is legal and globally, the leading cause of death for males aged 15-59… During that time the prison system is a profit-making industry (click on the number 1). I mean, [...]

These Are The World’s Drunkest Countries | Defamer Australia — April 13, 2011

This type of the activity should happen every week for the good health of the people. The interesting thing is that every type of the people can check Addiction Treatment Facility New Jersey﻿﻿﻿﻿﻿﻿﻿ for life recovering tools. This baseball event is so good and middle-aged people are enjoying this tournament.

I'm surprised you left out Figure 7. Although many parts of Europe drink greater quantities of alcohol, that benefits of being teetotal figure suggests that North Americans engage in "riskier" (as defined by the study) modes of drinking

You know, your situation is so similar to mine that every time I come home, I drink a bottle of wine. Vodka is drunk less, but it also spoils my health. From time to time I also drink it a lot. I want to get rid of this addiction and become a healthier person.

Caring health is necessary for each of us because it helps to multiple life years. By the way, in the past, one of my relatives had a serious alcohol addiction. Accordingly, I would like to mention how depression and alcohol rehab work together that has helped you learn more about the chronological age of treatment and make an appointment for a consultation. It was convenient and appropriate decision and i wish you to get rid of unpleasant addictions as well.