Oh really?  Gin and Tacos puts it in perspective: 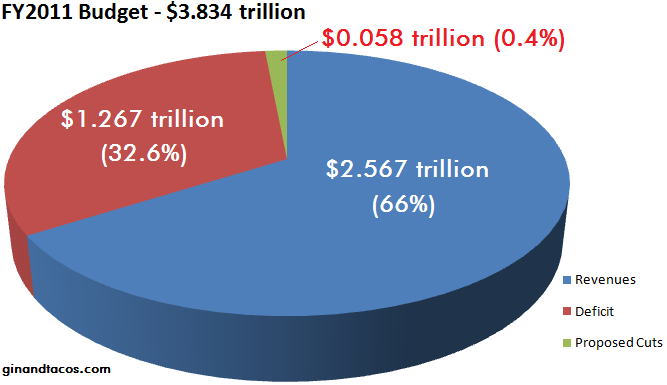 See that little green sliver?  That’s the budget cut.  I’ll let Gin and Tacos be the sarcastic one: “Wow, over 4/10ths of one percent of the FY2011 budget!”

More, it’s not even actually $58 billion because, as Riley reports:

In practical terms, the spending decrease is actually closer to $35 billion, since Congress failed to pass a budget for fiscal year 2011, and agencies have been operating at 2010 funding levels.

This is an ongoing problem for political conservatives.  Cutting spending is a useful sound bite, but when asked what they actually want to cut — you know, a plan to actually balance the budget without raising taxes or while cutting them — they typically flounder.  So, in this case, they’re successfully cutting four-tenths of one percent of the budget.  And what must we sacrifice for this tremendous step towards a balanced budget?  Among other things, this:

Thing is: When one puts together a pie chart--especially when one uses figures like 0.4%--it's kind of nice when all the pieces add up to 100%--or at least within a tolerance somewhat less than twice the value one is making points about.

ugh, always hard to be a patriotic american when these are the people in charge. anyway, great post!

btw here's a transcript of those charts, for people who use screen-readers:

sorry if i messed those up in any way.

I'll say this again: THE PROBLEM THEY ARE SOLVING IS NOT A FINANCIAL/ECONOMIC ONE- IT'S A KARMA PROBLEM!

These are Karma Cultists. In their view, too many people are "getting" things they do not deserve. People are poor as a reflection of their universal value, and to interrupt that judgment with something as audacious as welfare/rent assistance, etc is to defeat the Universal Order of Karma. (Anyone wanna bet these are avid disciples of "The Secret?")

This thinking is borderline insane, but its also deeply woven into our society. I'm still figuring out how to confront/defeat this worldview. Any ideas are greatly appreciated.

Here is a bet I will win:

Republicans will propose what this post claims is a small budget reduction and the liberal Left will go NUTS about how it is the end of the world and people will starve in the streets because of this little cut.

meanwhile the US spends over 600 billions* on military expenditure (the negative externality of hundreds of thousands Iraqis murdered since the US started its illegal invasion war not included.)

I support extensive cuts to the federal budget (and I've never even read "The Secret"!).

The whole "Karma Cultist" term is interesting. I disagree that people who share my views are motivated by a supernatural belief in Karma but I do think the term hints at something close to the real motivation: people should be responsible for their actions.

Let's take the federal response to the bursting of the real estate bubble as an example. Individuals took on a calculated risk, made incredibly imprudent and unwise decisions and ... they didn't lose. Instead, we now have the federal government trying to reflate home prices through tax benefits and quantitative easing and we also have the government spending its time and resources trying to cajole banks into restructuring loans for the benefit of these "home owners". I know several people who took on mortgages that they could never realistically expect to keep up with, got foreclosed on but ended up being able to live in their home for over a year, rent-free, because the bank was unwilling to seize the property due to the surplus in supply at the time.

Can someone here tell me why I, as a renter who purposefully avoided a real estate purchase when I realized the market was completely out of line with its historical trajectory, should support my tax dollars going to prop up a real estate market that would dip another 20-30% if not for the government's efforts? Why should I pay to punish myself for making the right market decision and in the process price myself out of owning a home?

I have no interest in doing that whatsoever. I'm not rich by the way, not by a long shot. I actually grew up in quite dire poverty, which has partly shaped my views: having parents who grew up toiling hard at what were incredibly low wages even then but managing to put together a life - I have zero sympathy for individuals who made middle-class wages but gambled it all away and now expect society to clean up the mess.

[...] Images has a nice breakdown of Republicans’ proposed spending cuts. Check out the post for a full discussion, but here is [...]