Pre-Existing Bias and Perceptions of Reality

The figure below, featured in a paper by political scientist Larry Bartels, maps partisan identification — whether one identifies as a Democrat, an Independent, or a Republican, and how strongly — with opinions as to whether unemployment and inflation had gotten better or worse under Reagan’s presidency (1981-1988).  It shows that partisan beliefs strongly predict people’s opinions about discernable facts. 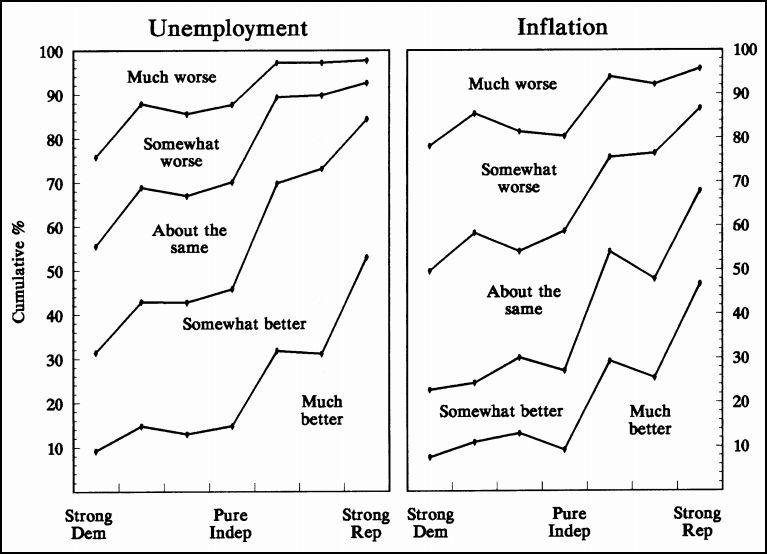 Via Gin and Tacos.

Is it justmeor are those graphs really confusing? I can't tell who believed what.

Yeah, I'm not understanding these graphs at all. My initial reading is that most Republicans think unemployment and inflation got worse, which I'm guessing is not the case.

Democrat or Republican, everybody would express themselves as "their understanding on the issue went much worse" after seeing these graphs...

I agree with the other commenters, I can't read these graphs. It looks like the Republican side is much more likely to say things got both worse and better.

This might sound odd, but try imagining those graphs turned 90 degrees clockwise ...

In other words, I think the correct answer is that unemployment got "somewhat better," and inflation got "much better."

Correct on unemployment: 20% of Democrats, and 30% of Republicans.

Correct on inflation: 5% of Democrats, and 48% of Republicans.

Like most studies of its nature, this one erases the existence of an entire group of possible respondants, and one I belong to: I'm neither a Democrat nor a Republican, nor an Independant in the sense of being about half-way in between the two. I'm to the left the Democrats. But I suppose my opinion doesn't count. (Which is unsurprising; in the US you can be any flavor of right-wing or centrist and you'll find someone in government who more or less represents your views. No one in "my" government - ie the government in which I am supposed to have a part, directly or indirectly - represents me.)

[...] June 2nd, 2011 from The Driblet of an Aphorism Like, Do not want, +1; Perception of Data in NoiseThe number of up / down voting mechanisms in the contemporary culture are legion. They create a sense of participation. Of Value. Of merit or demerit.Within Eurowestern art and design, the notion of statistical analysis, averaging, and polling creeps into the cultural vernacular. "We are researching!"Is all research research? Can voting and polling lead to solid design decisions? Does the notion of averages yield design dividends?Of Models and Crafting RealityThe moment a model is applied, it implies a certain degree of buy-in. With Twitter, we create and enforce a model out of 140 character thoughts. With Reddit, we create an up and down voting mechanism that enforces a buy in of a polemical scale[1]. With +1, we buy into a slightly more complex polemic of participation versus none.With a ruler, we buy into an entire Arabic numeral system and orthodox procedure of measurement.Each of the above might seem trivial on some level, but it is the underlying, unwritten, and enforced models that are potentially troubling.If given a wooden ruler to measure the psychology of human anger, it is not the inability of measurement that should worry us, but rather the chance that we might succeed[2].The Model Sculpts the DataWe cannot underestimate pattern recognition as an important concept of intelligence and learning. In some instances however, this a priori knowledge has resulted in what appears to be reductionism; a fallacy of division from a vaguely Postmodern neglect of context and measurement model.Does data hold weight if we ignore the arrangements and the subtle contexts not included? When does data, when isolated and displaced from context, undermine the data itself?"[...] there is obviously a difference between us now, and us hacked up into a stew. Both contain all the same matter, but not the same pattern of arrangement. Thus, how matter and energy are patterned, arranged, within space and time is itself a defining aspect of a thing, and this pattern has causal and other distinct properties." -- Richard Carrier, Sense and Goodness Without God, pg 130Are we seeing "data" or "noise"? Are we viewing "objectivity" or under the "bias" of an invisible phenomenon[3]? Is our Eurowestern aggressive and insatiable passion for order and understanding stomping over the delicate complexities of contextual design insight?The goal is not not discredit the value of research and examining, but rather the skepticism brings with a hope of the contrary; to work toward a culture of contextual analysis and a questioning of implied models of measurement. A borrowing of powerful Postmodern analysis models leveraged against the contemporary culture.Let the design research and analysis reflect limited, constrained, and detailed context.This hope becomes increasingly difficult when polemical plus ones, likes, and such models become a cultural norm. Perhaps doubly so when those cultural norms are tied to extremely successful companies. The mirage of a tenuous connection between market cap and a successful model is an easy pitfall to fall into.After all of the metrics, all of the analysis, and all of the gluing together of the results, does such an approach do the art and craft of design justice?What do your measurements say?Thank you all for taking the time to read...[1] With that buy in, however, we fail to ask questions. What of concepts that defy 140 characters? Does a vote up imply the author agrees with the link to "a crisis in Egypt", a funny meme within, a parallel of their moral views, or some other reason that brings them to press it?[2] It leads me to wonder what Milgram's experiment would have looked like had the designed model included a "Do not desire to buzz the patient" button. The model sculpts the data, and in this case, with dire implications. How did the design of the experiment's model influence the data, and in turn the data influence the derived analysis?[3] Bias shows some interesting ties to perceptions of reality as highlighted in this bit of data on partisan influence on perception. [...]