Sara P. let us know about a map at National Geographic that shows the distribution of surnames in the U.S.

The names are color coded by region of origin of the name: 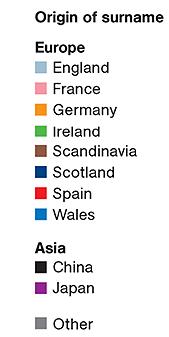 Nonetheless, the concentration of last names serves as an echo of immigration and settlement patterns. British-origin names tend to dominate across the U.S., unsurprisingly, particularly Smith, Johnson, and Williams. Because slaves were often given the last names of their owners, a significant proportion of individuals with British last names are African American — for instance, African Americans are about 20% of people named Smith.

Several Irish-origin names stand out in Massachusetts, as well as some French surnames in Maine: 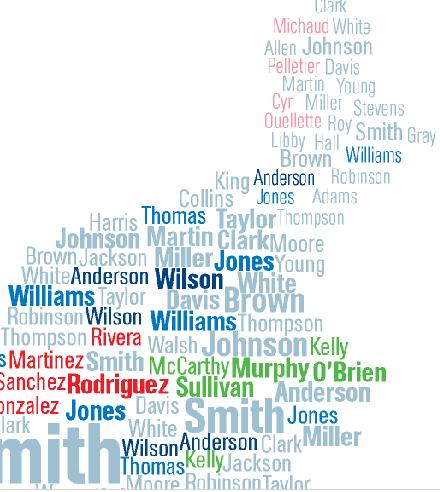 The map of Hawaii reflects the significance of the Asian population there: 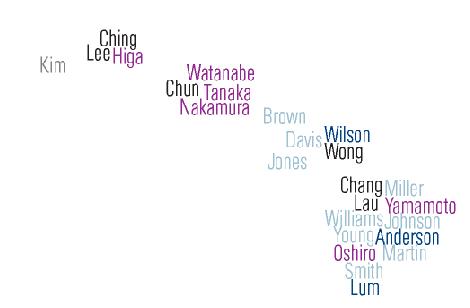 Spanish-origin names in the Southwest: 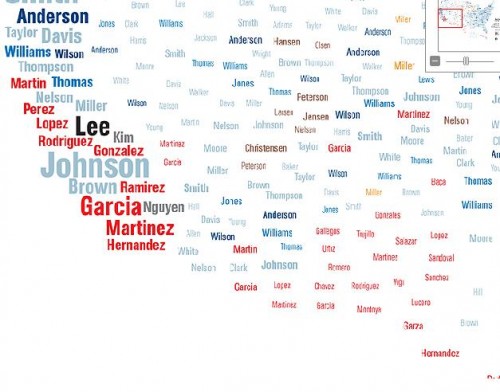 The names common in the Great Lakes/upper plains region reflects the fact that the area was a common destination for immigrations from Germany and Scandinavia: 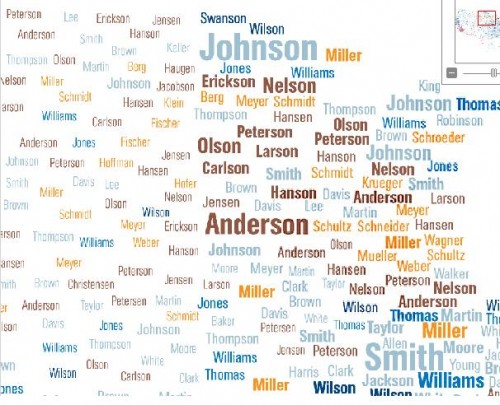 I looked up the geographers who created the maps (James Cheshire, Paul Longley, and Pablo Mateos at University College London) and that led me to an interesting website sponsored by UCL, the World Names Project. If you type in a surname, it will show where on the globe it is most common. You can also zoom in on individual nations and see the distribution within them. Here’s the global distribution of my last name, Sharp: 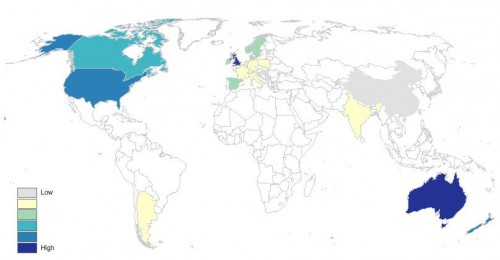 You also get some data about the name: its origin, the top 10 regions and individual cities for that name, and the most common first names that go with it (which, in all the names I tried, were overwhelmingly male, so I don’t know what to make of that).

As Sara said of the National Geographic map, many of the results are predictable, but that doesn’t mean it’s not fun to look at them.

My explanation for Gwen’s finding that the most common first names are overly represented by male names is that names for boys are less variable than names for girls.

Interesting post on that here, which notes, “it [natural language geocoder] needs 4200 first names for girls to cover 90% of the population, but it only needs 1200 boy’s names to reach a 90% coverage. The reason for this huge difference is mainly found in the top positions. The ten most popular male names reach 23% whereas the ten most popular female names reach a comparatively meager 10%.”

My explanation for Gwen's finding that the most common first names are overly represented by male names is that names for boys are less variable than names for girls.

Interesting post on that here (http://geonames.wordpress.com/2006/05/20/first-names-more-variety-for-girls/), which notes, "it [natural language geocoder] needs 4200 first names for girls to cover 90% of the population, but it only needs 1200 boy's names to reach a 90% coverage. The reason for this huge difference is mainly found in the top positions. The ten most popular male names reach 23% whereas the ten most popular female names reach a comparatively meager 10%."

Or, from the FAQ:

Wow -- my mother's family name is unusual, so when I look it up, I can zoom in on the U.S., then on Texas, and see the cluster of my relatives around Austin. Neat. The map itself is kind of disappointing, though, because it lacks data for so much of the world -- I can see where on the globe my surname is most common, as long as my surname is common in Western Europe, North America, Australia, China, or India.

This also seems likely to skew towards an older demographic-- many younger people no longer have home phone numbers (if they ever did), and thus aren't listed in the directories where these names were found. I know that I've never been listed in a telephone directory in my life, and I'm quite sure that's the case for many people 30 and under. That probably offers a further explanation for why, as the FAQ states, most telephone numbers are listed in men's names, which seems a bit old-fashioned otherwise.

Can anyone explain why the surname "Anderson" is in two different colors in the maps?

Also, were different spellings of similar-sounding names included in one or considered separate? For instance, I know someone whose Welsh last name is spelled Wyman but she's seen multiple different other ways to spell the name within her own family tree, mainly (I think) because of the forced Americanization of names at Ellis Island.

In California, there is a light blue "Nelson", and in the upper plains pic there is a brown "Nelson". So is the name of Scandinavian or English origin?

I loved pondering this map in NG, and playing with the website you mentioned. I found it especially interesting that there seemed to be no data from Africa or Asia west of India, or south of China. Even trying surnames I know to be of those origins yielded nothing.

Still, interesting look at the movement of the global population.

Gwen, I clicked the hyperlink provided in your post about the name Smith for African Americans and found this comment: "Slaves often took their owners' names, so about one in five Americans now named Smith are African American".

That sentence is given in your post as "Because slaves were often given the last names of their owners, a significant proportion of individuals with British last names are African American — for instance, African Americans are about 20% of people named Smith".

I also wonder whether the oft repeated claim that freed African Americans took the last name of their former owners is even true. I grant you that most African Americans took last names that were familiar to them, but were those names really the last name of their latest owner? If that person had treated those enslaved people horribly, why would they have wanted to have that last name and give it to their descendents?

Some years ago, I attended a friend's family reunion and heard the story about how four siblings chose their last name after being emancipated. One of those siblings took on the last name of his former owner. Two of the siblings walked some distance to ask a White man who was known for being good to his slaves whether they could take his last name. They were given that permission, but both of the siblings spelled that name differently -and each spelling was different from how that White man spelled it. This was probably because those siblings did not know how to read or write. The fourth sibling took another last name because of other reasons. That is just one example of African American surname practices. The story I love the most was one I read in a book on African American history. In that story a man took the name "Beman" because he said that when White people said his name, they would be acknowleging that he was a man.

Again, Gwen, I wonder why you decided to change that sentence from African Americans being responsible for their choice of surnames to African Americans passively accepting a last name that their former owners gave them.

Just a general caution: it is important not to conflate surname with ethnicity - they do not always correlate. There are many reasons for the predominance of Western European surnames. In addition to African American surname practices that other people have commented on, many new immigrants, particularly in the 18 and 1900s, have changed, shortened or otherwise Anglicized their surnames. Also, many North American Indians were given Anglicized surnames in the boarding schools.

This was really, really interesting! I searched for my last name, and found that there are apparently very many people of that name in one particular city in Austria, but not anywhere else, for some reason.

Also, according to the chart there are approximately 2.5 fpm in the USA for my name, and when I zoomed in on the region I, my parents and my brother live, it showed it as having a moderate density. So that's us! If we moved that region wouldn't be represented at all by our last name!

I know it seems silly and obvious, because it's not a common last name, but I am very tickled that I, personally, show up on that map.

Hm. Where are all the Europeans from the East? Poland? Russia? Hm. What about the "english" names from french-speaking Normans or Vikings from Scandinavia? Hm. What about Yiddish names which look and sound german? What about spanish "apellidos" (YOUR surname is the surname of your mother AND the one of your father)? Hm. Hm. Hm. Nice map, nice idea.

Sigh...And once again, Alaska gets left completely out of the picture.

The world names site you mention seems to have a major issue: It looks like it's only considering places that use the Cyrillic alphabet. (Or so I'm assuming from the fact that Russia isn't mentioned as a top place for the names Romanov and Petrov and nowhere in Asia is mentioned as a top place for Weng or Wong. I guess it makes sense not to include them: is the *right* spelling for the Chinese last name Weng or Wong or Wing? But you end up with a pretty distorted picture if you think Denmark is the most common location for Wengs.

Now I'm actually really confused, because there are countries in Asia (i.e., Singapore, Malaysia) that use the Cyrillic alphabet, but they don't seem to be being included. This is strange.

Another explanation for Gwen's finding: This was done using phone books, yes? Many couples and widows are listed by only the husband's name both for societal reasons and as protection. This means the phone book itself is biased towards male names, biasing the results.

As far as I can tell, "World Names Project" is actually kind of a misnomer. Seems they don't have enough data from places in the world besides the West for anything to show up on the map. I have a fairly unusual Arabic name...you'd think it ought to show up in the Middle East, no? But it doesn't.

They have pretty much all the major regions of Europe, except...ITALY. What the heck? Italians don't exist in America?

I think they used surname dictionaries (such things exist) or census data and the reason why they have 'more' male forms in some places is because the male form is traditionally considered 'basic' form and used in statistics and dictionaries.
Using phone books would be a bad idea, because it would reflect only people who have a landline registered on their name.