The New York Times has made available a digital copy of The Gentleman’s Directory, a guide to New York City published in 1870. The guidebook informs travelers of a particular type of local attraction: brothels. Of course, the information was for curiosity’s sake only:

Not that we imagine the reader will ever desire to visit these houses. Certainly not; he is, we do not doubt, a member of the Bible Society, a bright and shining light…But we point out the location of these places in order that the reader may know how to avoid them… (p. 6-7)

Certainly passages like this, from p. 13, make it clear that such establishments are to be avoided: 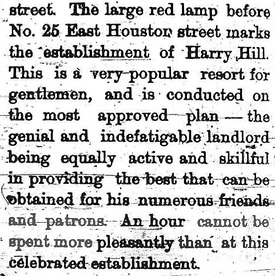 It also included pages that were simply ads for particular brothels:

Interestingly, the NYT checked the 1870 Census for the houses listed in the guide. In general, the women living there were described by Census workers as domestic servants or women who “kept house.” However, they found a few cases where the Census openly listed them as working at a “house of prostitution” or “house of assignation.”

His ad also describes an unspecified cure for women that may very well refer to abortions (at the time, products that caused abortion were often advertised as helping with menstrual regulation or any type of “menstrual stoppage”):

In addition to an article about the directory, the NYT put together a map showing the locations of the establishments it mentions (which were a small proportion of all brothels in NYC, where prostitution was illegal but widely available at the time):

Chicago, St. Louis, and New Orleans also had such directories. I think San Francisco also did, but I'm not sure.

I find this very interesting to see that they had directories basically describing everything you need to know about finding some where to get sex. It is also interesting how they portrayed everything in the ads: calling condoms male safes and abortions as menstrual regulation or stoppage. As a young adult that pretty much believed my world was so much different than the 1870's, I have realized the world has been the same all this time.