Lightening Aishwarya Rai Bachchan on the Cover of Elle

Deeb K. and YetAnotherGirl pointed out another example of a woman apparently having her skin lightened on the cover of a magazine. The December 2010 issue of Elle features Aishwarya Rai Bachchan, a major star in the Indian film industry who has also been a spokesperson for L’Oreal and appeared on the “Most Beautiful Women in the World” lists of various magazines. Here’s the cover, with a very pale Bachchan: 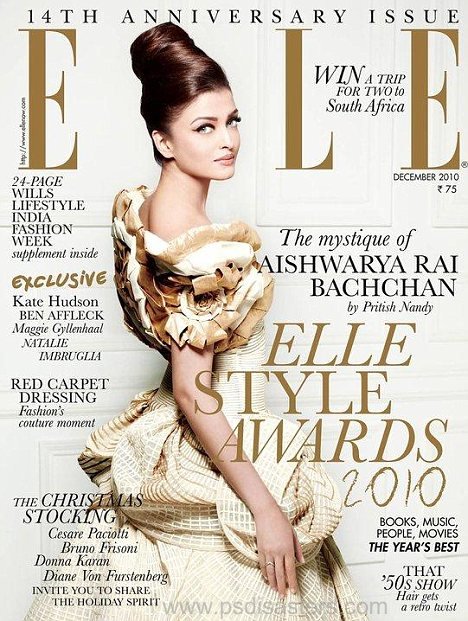 Let’s compare to other photo of Buchchan here and here.

Elle was criticized just a few months back for apparently lightening Gabourey Sidibe’s skin tone on the cover as well. At that time, the editor said Sidibe wasn’t touched up any more or less than other women put on the cover. That may be true. But it leaves unanswered the question of why the women’s skin tone is considered insufficiently glamorous or beautiful as it is, and why making these stars’ skin lighter would be seen as a clear improvement.

The level of whitening here is very common in Asia, it's pretty much "normal". It's all over magazines, advertisements, and studio photography. It's very obvious that all of it is digitally altered, but it's surrounds the concept of "beauty" so much that people accept it as something to aspire for, just like that of altered images in western countries. Beauty magazines and products all over Asia (with the exception of Japanese Ganguro) all talk about whitening skin as improving beauty.

I think this specific instance has gained prominence because of how well-known Aishwarya is internationally, but realise that what happened to her on the cover is standard, not an isolated incidence of white-washing.

(I'm not saying that whitening is any batter than tanning or obsessive dieting, but I felt like I needed to note that this is nothing unusual.)

I would say it is not a surprise in India, where women regularly use substances to lighten their skin because being white is trendy. The magazine just follows this trend - which cannot be fully justified though.

faces are painted generally. for models, and others skin tone is an outfit as well. why not fake tans to digitally darken too? is that choice made as well?

A friend of mine, from northern India, tells me that when she was growing up her mother wouldn't let her out in the sun without being covered up, because she'd "turn black".

I've asked her about this, and after some 15 years in Canada, I think she's realized how awesome it is to be brown among all these pasty people (like me). But the whiter=more beautiful thing in India has nothing to do with the west, or colonialism, or anything external. It is purely homegrown craziness.

At first glance, I wondered who this was, but once I put the face with the name I was shocked. It is insane to think she needs to have lighter skin to be more beautiful, she is already so gorgeous and already has light skin. I actually think she looks a bit washed out. I don't want to sound racist or anything, but I bet many American white women would gladly trade her for her skin toned, which looks like a lightly tanned Caucasian. I am only a shade darker than Edward Cullen and was always envious of people with caramel skin growing up- they didn't need to tan to have darker skin. Now I have accepted my paleness because it is too much work and money to appear tan, and makeup shopping is easy now- I just go for whatever shade is on the far left! :) I guess it is a case of wanting what you don't have, and the grass is greener on the other side of the fence.

"Grrr!!! She's standing in light and is too pretty! Let's demonize her!!!"

Jebus Crist. Get ahold of yourselves.

There are many uproars over "lightening" skin through photoshop that are actually due to lighting, but this is not one of them. Well, it accounts for some of it I'm sure, but not that level of whitening.

As a portrait photographer, the only clients to request skin lightening in photoshop have been Indian. Is this commonplace within the Indian culture?

This may be apples/oranges, but I'm reminded of the infamous French Vogue spread that featured white model Lara Stone in blackface: http://nymag.com/daily/fashion/2009/10/french_vogue_shoots_lara_stone.html

Does this mean that skin tone is now viewed as just another thing to change capriciously via fashion, i.e. hair color, lipstick, clothing, etc?

"But it leaves unanswered the question of why the women’s skin tone is considered insufficiently glamorous or beautiful as it is, and why making these stars’ skin lighter would be seen as a clear improvement."

The answer to this question is simple. Elle will lighten the skin tone for the same reason they don't put fat ugly men on their covers - because fat ugly men don't sell magazines.

Elle recognizes that putting light skinned women on their covers will sell better than putting dark skinned women, otherwise they wouldn't do it.

So don't blame Elle for catering to the preferences of society.

If there is a question to be asked, it's this: why don't women want to buy magazines with darked skinned models on them?

On a related note, the recent feature in the NY daily News on "Stars in the Nude" basically said that nude skin tone/skin coloring = peachy white. Not quite the same as digital skin coloring, but supports the underlying logic of white=beautiful...

I'm both a sociology graduate in my senior year and someone who's worked with graphic design for close to ten years. I'd just like to mention that there is something to be said for the aesthetics of the cover if you lighten the skin tone of the model, given the white background she's in front of.

Just a quick comment on a possible reason for the change in her skin tone - sorry if someone else has posted about this. The range of human skin tones don't always reproduce well in photos or in mass-produced imagery, like magazine covers, leaving the subject looking blotchy and uneven in their complexion - regardless of what their skin tone is. While you can do amazing things with photo editing software and camera lighting and filters, there is still the chance that the person won't look flattering once it's been run through a printer one time per color.

I'm a fair-skinned (deathly pale, to be honest) individual who can come out looking yellow or red and uneven in my own photos, and in my years of working as a newspaper graphic designer, the easiest I-on-a-deadline- "fix" over the years IS to over-lighten your subject. It's not true that the camera cannot lie - it does all the time. Take a photo of a white sheet, then look at the photo. It it truly "white" or are there pixels of all sorts of colors present? In photos of humans, red is actually a color that is prevalent in photos of ALL akin types, and I've had to correct away from it to make the photo try to match the person's actual complexion many times, sometimes with good results, sometimes with them being too light (too dark wasn't accepted).

The print process alone tends to darken images, especially in newsprint, through something called "dot-gain", by where the individual ink drops per square inch spread and can even mix together, and the darker an image, the more the spread, the muddier the mix, resulting in a bad image that your publisher gets angry about printing. We were even given instruction in photo processing seminars to over-correct an image to make it lighter vs. darker, in case there were press problems.

I'm only posting this as an alternative explanation to a nefarious "whitening" of the actress.

First of all, I've just discovered this blog, and it's so interesting, such a find. I don't understand how I've never stumbled on it before, it must be quite new I guess (didn't check yet how far back the archive goes).

But regarding this post, the "lightening" may have been a sort of lesser "photoshop disaster" thing. I work with image retouching, and it happens that sometimes you will get better looking photos overall if you lighten then somewhat, and unless you keep comparing it a lot, you will miss things like that, like subtle shades of tan or colors of other things. And is harder to adjust the "color curves" of a picture at the same time you preserve exactly the same apparent degree of skin shade.

This blog is aweseome, please, please, don't be some of those who thinks that everything is some sort of racist conspiracy, I beg you. I think that picking on this sort of stuff only undermines the real, more substantial cases one could make. It's somewhat akin to how comparing, say, killing of ants or rats by exterminators with the holocaust makes a caricature of the holocaust. I find similarly disgusting even less extreme comparisons, such as the end of affirmative action as the return to Jim Crow laws -- and I've in fact seen this comparison being made by an advocate of the continuation of affirmative action. I think it only weakens the case for it.

I'm not even discarding totally the possibility here, but it's not material to make a strong case.

And yet so many white girls tanning (in tanning beds) all the time... people should work with what God gave them.

Americans...always whining about everything and everyone.