Comparing Covers of Maxim and Cosmo

Jacqueline S. told us about a post at DarrenBarefoot comparing the words that appears most frequently on the covers of Cosmo and Maxim. Darren typed a list of every word that appeared on the covers for three years (2007-2010 for Cosmo, 2005-2008 for Maxim; he doesn’t explain why he chose different time periods) and then made word clouds to illustrate frequency. The results for Maxim: 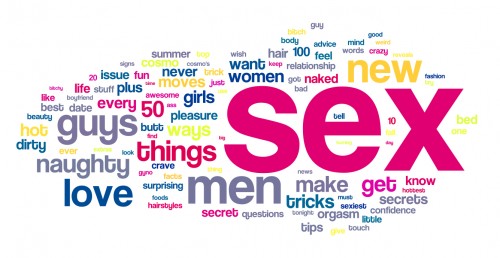 So in both cases, sex rules, followed by a reference to the category of people you’re supposedly interested in having sex with (since both magazines pretty much exclusively assume heterosexual relationships). The word “sex” or “sexy” appeared at least once on ever single Cosmo cover in the 3-year span, and most Maxim covers as well.

But notice how much more the language on Cosmo covers focuses on sex and relationships than Maxim‘s does, with more frequent use of words that explicitly refer to men and/or sex. Of course, those familiar with Cosmo, or most other women’s magazines, know that its headlines about sex make it clear what the point is: various ways to please your man, which translates into increasing your own pleasure. Maxim, on the other hand, focuses less attention on relationships (or health/fitness) and more on money, travel, and pop culture (sports, TV, movies).

To highlight how dominant sex is on Cosmo covers, Darren made a 15-second video of them in rapid succession, back and forth:

I doubt any of you are shocked by his findings, but it’s a nice illustration of the way magazines aimed at women reinforce the idea that our primary goal should be finding, pleasing, and keeping a heterosexual partner to a degree not usually found in men’s magazines.

It is funny to see how the Maxim cloud includes girls' names (Vanessa, Eva, Sarah, Christina), while Cosmo cloud does not have boys' names.

Other than Beyoncé, I don't think I saw a single non-white face in that video.

Another interesting thing in that cloud: Maxim's cover refers to females exclusively as "girls," while Cosmo's refers to males as "guys" and "men" about evenly.

"Women" doesn't make an appearance on Maxim's cloud, nor does "Boys" on Cosmo's.

reinforce the idea that our primary goal should be finding, pleasing, and keeping a heterosexual partner to a degree not usually found in men’s magazines.

This is definitely a critique I'm on board with. But I also have a hard time not just giggling that women are supposed to be the prim gender, and yet the exact same mainstream culture that insists on that stereotype simultaneously agrees that we girls just can't stop talking about fucking. (Now if only the talking could be a little more realistic, helpful, and feminist...) If you didn't know about the often-man-pleasing-centric nature of the sex talk, that cloud would suggest that women are the real horndogs out of the bunch. :)

The emphasis of the sex-related material in Maxim is on *her* pleasure, just as Cosmon's is on *his*.

Interesting! The female names in in Maxim jumped out at me too, as did the lack of the word "women." I guess women like men and guys, but men and guys in Magazineland don't like women. They like girls.

It's something that's always bothered me, when women get referred to as girls. I'm not sure how aware people are of it but I always want to point out that "woman" is always a more empowering term than "girl" is. You never talk about a "businessgirl" or a "policegirl" or a "spokesgirl." No. It's businesswoman, policewoman or spokeswoman for a reason. We intuitively know this.

Also, it's funny the words you notice after looking at the images for a while: in Maxim I noticed "cheerleaders" "honk" and "god" (presumably in the context of "how to look like a..." and "sex god").

Great job!
It is not only significant from a cultural and political point of view but it is also unbelievable useful for education purposes.
Thank you and congratulations from Italy.
Riccardo Mario Corato

File under "bleeding obvious," perhaps, but I found it interesting that the Maxim cloud featured the first names of specific women - Christina, Sarah, Vanessa - but not one actual man is mentioned on any Cosmo cover.

But maybe the comparison is too asymmetrical to be particularly relevant. For one thing, both magazines feature female models on their covers. Both are visually invested in presenting a standard for female beauty and female behavior.

A male equivalent of Cosmo would use only airbrushed male celebrities on its cover, its content would skew more heavily toward sex/dating/health advice, and its primary interview subjects would be men. Something like GQ but with a flashier sex angle.

A female equivalent of Maxim - or at least its cover - would look like a cross between Tiger Beat and Playgirl.

Unrelated: does anyone know how "oh dead" got in there?

Something that has not been mentioned in the post: That women's bodies on the covers are always the SAME SIZE. How can that happen? How can all women be the same size?

Photoshop. You changed the game.

[...] about the inappropriate use of terms and content in the magazines.  The first article, “Comparing Covers of Maxim and Cosmo had focus on the terms that appear on the cover of the two magazines “Cosmo” and [...]

Guess I'm not the first to point this out, but the thing I find the most interesting is that on the cosmo one it says Men or Guys but on the Maxim one it just says girls and not women - I think it's not only a sexist/power issue but also an ageism issue. Men are always told they should like younger and younger women (ie girls).

It really bothers me that he chose different time periods, because that makes this comparison almost useless. Look at Maxim's "America," for one thing. Maybe the word featured so prominently because 2005-2008 was definitely a more fiercely patriotic period in the media than 2007-2010. And that kind of effect can filter down to lifestyle monthlies like these, even though neither magazine is particularly prone to political stories.

It makes me question what other media trends could have caused such fluxtuation between the two time periods, and then I completely doubt the relevancy of this study. And it bothers me because I imagine the results would be quite similar if he had chosen the same time period, but since he didn't, his work can't be regarded as truly scientific. Why couldn't he have just chosen the same period?

HA! This reminds me of a similar type of comparison I did when I was in high school: I picked out a few of my boyfriend's guy magazines, and I grabbed some of my own mags, and I randomly selected pictures of women and their feminine assets to cut out of them. I then made two collages, one for the pictures from the men's mags, and one for the pictures from the women's mags. Guess what? Couldn't tell the difference between the two collages; the women's magazine cut outs recognized women as people no more than the men's mags did. I also noticed a lot of pictures in both groups cropped the heads off of women either partially or completely, emphasizing the body or particular body parts. My experiment wasn't terribly surprising, but it still sort of pissed me off, just like this ^ comparison does. It's one thing for men to objectify women, but it's a whole other ballgame for us to do it to ourselves. We fall right into the trap every time.

And I, too, wish he had picked the same two timelines, just to keep it as scientific as you could get with something like this.