A while back Kale let us know that the New York Public Library had made their images collection available online.The collection has images on a huge array of topics, from fashion to the military to slavery to insects to a whole category for stilts, and including political cartoons, illustrations from publications, photographs, and so on.

Kale found the collection particularly interesting as a way to look at historical racism and rhetoric about race relations in publications aimed at White readers. This 1875 cartoon, titled “A Privilege?”, presents segregation as actually protecting African Americans from the scourge of alcohol: 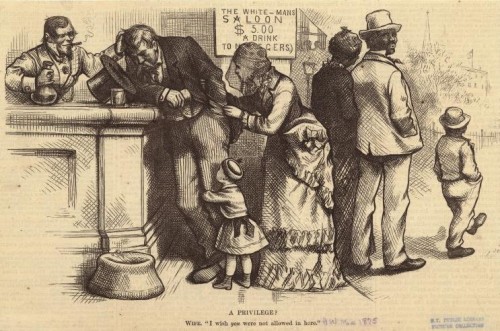 Wife, “I wish you were not allowed in here.”

Another, published in Life in 1899, implies African American men are burdens on their families, making their wives take on the role of providing for everyone: 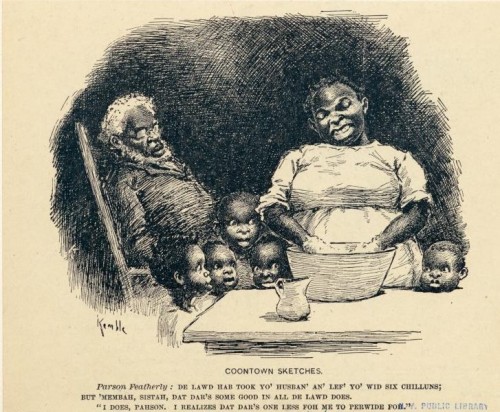 Parson Featherly: De Lawd hab took yo’ husban’ an’ lef’ yo’ wid six chilluns; but ‘membah, Sistah, dat dar’s some good in all de Lawd does.

“I does, Parson. I realizes dat dar’s one less for me to perwide foh.”

This 1860 cartoon from Harper’s Weekly shows an African American woman (presumably a slave) in the South using the “Bobolitionists” — that is, abolitionists, who wanted to outlaw slavery — as a threat, a type of monster that will come steal him if he’s not good: 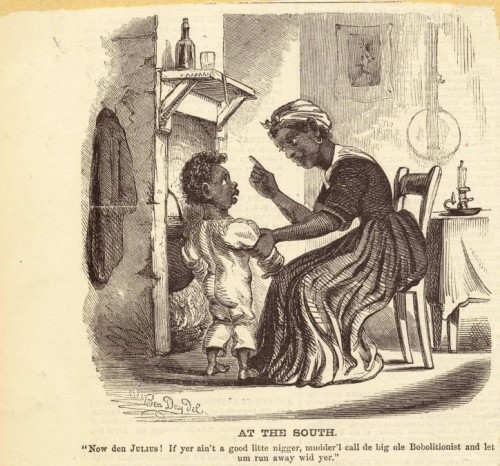 I’m sure it must have been very comforting to some readers to think of slaves viewing abolitionists as threats rather than potential allies.

Other cartoons mock African Americans’ physical attributes, marking them as laughable or even grotesque: 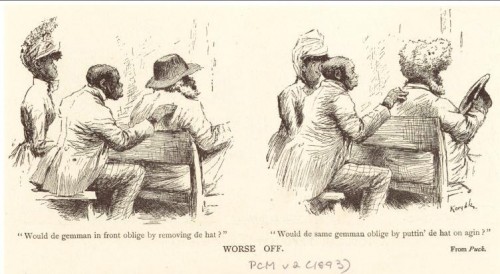 “Would de gemman in front oblige by removing de hat?” 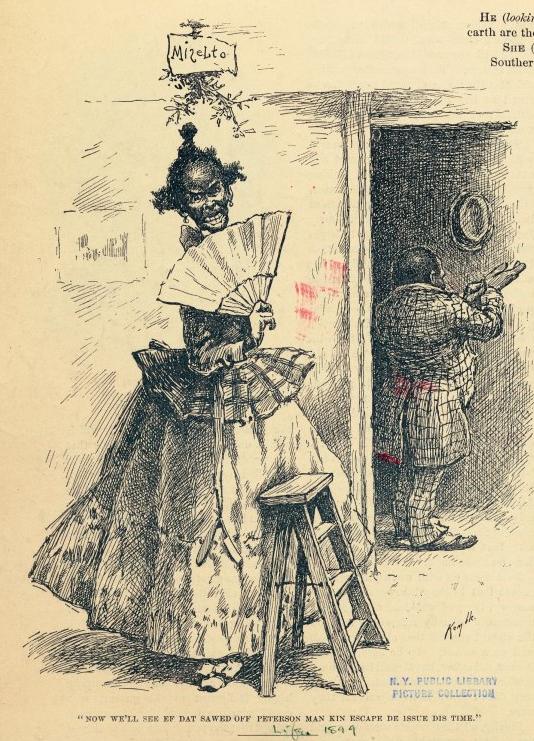 There are also examples that criticized U.S. race relations, such as this 1848 cartoon from Punch [Note: a reader thinks this might be about France, which banned slavery in 1848, but the NYPL has it listed as relevant to U.S. slavery, so there may be so lost context here]: 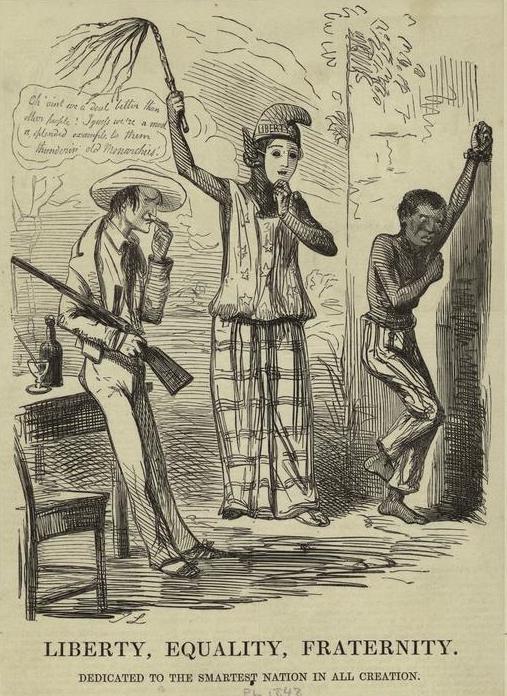 [Note: A commenter has expressed concern that I ended this post with “Enjoy!” I apologize for my insensitivity. I meant it in terms of “Enjoy browsing this fascinating archive,” of which racist imagery is only a small part, not, I hope it would be clear, “Enjoy looking at racist cartoons!” I wasn’t thinking about how it might appear immediately after those set of images, and I should have been more careful.]

I spent some time puzzling out the thought balloon in the last one and I think it reads: "Oh, ain't we a deal better than other people! I guess we're a most splendid example to them thunderin' Old Monarchies!"

Nice to see that the idea of American Exceptionalism has always attracted heavy sarcasm. I also like the clever subversion of symbols in replacing Lady Liberty's torch with a whip. Now I'm just left wondering what's going on with the cowboy. Is he smelling his fingers or playing a harmonica or what?

Gwen, I have a serious question for you-why did you add the word "Enjoy!" to the end of this post?

That word definitely seems out of place to me.

It seems to me that adding that word to the end of this collection of racist cartoons dishonors the lives of my Black ancestors almost as much as those old cartoons do.

I know the NYPL itself has identified the last one as pertaining to the U.S., but I think it's at least partially about France. Witness the national motto, the Phrygian cap, and the fact that 1848 is when France outlawed slavery. Certainly there's some context that we're missing, I think.

I want to address each picture individually, because each one does have a different racial agenda, so to say.

The first one, ties into the fact that a certain subsection of white people (or otherwise privileged people, but in this case, whites) will ALWAYS believe that the underprivileged are somehow better off than the privileged. Many white people felt that blacks were as well off as possible for a black person's potential as slaves. After emancipation, this continued, and even today, you hear white people saying 'the Civil Rights movement is over, what more do you want?' or implying that Affirmative Action has somehow placed blacks in a position where they have power and privilege over whites.

The second picture plays on stereotypes that were indeed based in reality; at a certain point in time post-slavery (and to a lesser extent, today) it was indeed easier for a black woman to gain work than a black man. People interpreted this as 'black men are lazy, and their women do all the work while they lie around.' The actual explanation was, actually, the fact that black men were seen as threatening, both physically, and to white men's labor-related jobs (carpentry, etc). However, many black women were already doing female-oriented menial tasks such as cleaning and washing, so they were not a threat to white women's work (especially as the goal of white society for a long time was to have a woman who did not have to work because her husband earned money, especially enough to hire maids, nannies, and cooks). And of course, there's also the gender based stereotype that a woman will not complain about poor pay, poor treatment, or sexual harassment/assault from her employer, but a man might demand higher pay and better working conditions.

The third cartoon was obviously made to appeal to slave owners, as opposed to northern whites, or even white southerners who couldn't afford slaves. A lot of the defense of slavery at the time was based on slave owners claiming that the slaves loved their masters and their position.

I don't have much to say about the fourth picture, but the fifth is addressing much more than the stereotype 'ew black women are ugly.' She's under a misspelled sign (mocking the fact that black people are supposed to be stupid, ignoring the fact that they were generally denied the education that would allow them to write well), and she's attempting to catch a man, mocking the stereotypes that a) black men refuse to commit to their women (and children) and b) that black women are man-hungry Jezebels. And of course, the critique of her looks goes far past 'she's not traditionally attractive.' While she is dressed in fashionable, elegant clothes, her hair isn't just kinky like the man in the fourth picture, but it's not done and thrown into bunches more typical of a toddler than a woman with a sexual appetite and enough time and money to wear hoopskirts and white gloves. There's a message there far beyond mocking her looks. It's a message about class. The cartoonist is saying that even if blacks have their freedom, even if they come into enough money to buy finery, even if they dress in beautiful clothing, they will always be abhorrent, stupid, ugly, and second-class citizens. The message isn't one of mocking so much as 'why bother to let these people have rights and positions of power and education? They will clearly just waste them.'

I don't think I understand the last one too terribly though. :/

The last one is obviously about France, "liberty, equality, fraternity" is the french motto.

I would really like to use some of these images in my Sociology of Gender course along with the "Controlling Images of Black Women" chapter in Patricia Hill Collin's Black Feminist Thought (2000). Collins discusses how these images of Black women help to prop up white women's femininity. By contrast, white women seem like passive, dainty, feminine princesses. Perhaps I could use some images of white women from these archives as well, along with some contemporary ads.

But I wonder if it is appropriate to show these images in the classroom. I can only imagine how hurtful they must be for people of color. (I am a white woman from a working class family.) If other educators are reading this, could you tell me if you use these types of images? If so, how do you introduce them to students?

I'm also a white female educator, and like Luey, I think it's important to confront our nation's racist past through thoughtful examination--after warning students that the images can be upsetting.

Have you seen the film Ethnic Notions? They examine the construction of African Americans in the media and how it changed over time. My students generally find it fascinating, although appalling.

What I find interesting in the first cartoon is the way that the bartender is feminized. He wears fine clothes and jewelry, no doubt paid for by the husband, while seductively playing with the husband's hair. He's like a mistress.

Also I notice the use of a freemason's compass and square in place of the letter "A" on the sign, which probably had some contemporary significance. (Maybe the cartoonist was Catholic?)

I was re-watching Joss Whedon's tv series Firefly over the past week, and the cartoon above with the man being asked to remove his hat in church reminded me of a moment of discomfort I felt.

There's a sequence in Firefly where River is terrified when the Shepherd takes his hair out of its customary ponytail. His hair looks like this when it's loose: http://brusimm.com/wp-content/uploads/2010/03/FIREFLY-Jaynsetown-Shepherd-Book-hair.jpg

This is clearly meant to be amusing: that River is terrified by it, and how "funny" it looks. Extra discomfort points because Zoe, the other black character, is also brought into the scene, and teases him about his hair too, making sure he puts it back in the ponytail. Felt like a way of making the joke seem OK to me ("See! Other black people think it's funny so it's OK to laugh").

I was noticing a lot of stuff in Firefly I didn't like so much this time round.

I thought this vintage ad from Monsanto might be of interest, found it while browsing through vintageadbroswer.com

Who cares? Black people should stay in African bush.