As most of you probably know, yesterday Representative Gabrielle Giffords, of Arizona, was one of 18 people shot at a public event yesterday. Elliott J. went online to find more information and came across this piece from Fox News: 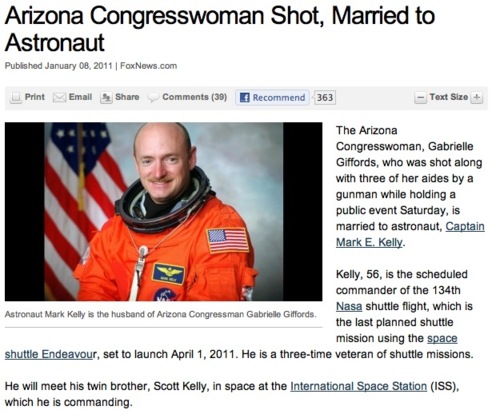 The piece has now been expanded somewhat, with a photo of Giffords added, the photo of her husband pushed to the bottom of the page, and the title changed.

When I was googling looking for the Fox story, I came upon this from the website of the Orlando Sentinel: 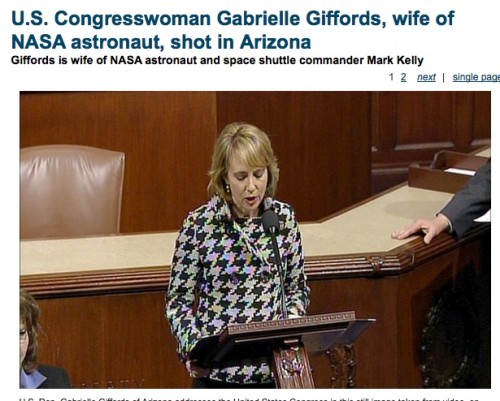 I get that the point of a title is to draw people in and give them information that might make the topic seem interesting or relevant to them. And I guess NASA has a center in Florida, so maybe being married to an astronaut has special resonance there.

But really: a woman had a person walk up to her in a crowd and shoot her in the head, also shooting other people and killing some of them. I would hope that, even if she weren’t a member of Congress, that in and of itself would be sufficient material for a headline, regardless of who the victim’s husband was.

UPDATE: Kat P. sent in another example from the Galveston County Daily News. The headline reads: “Wife of shuttle commander shot during rampage.” 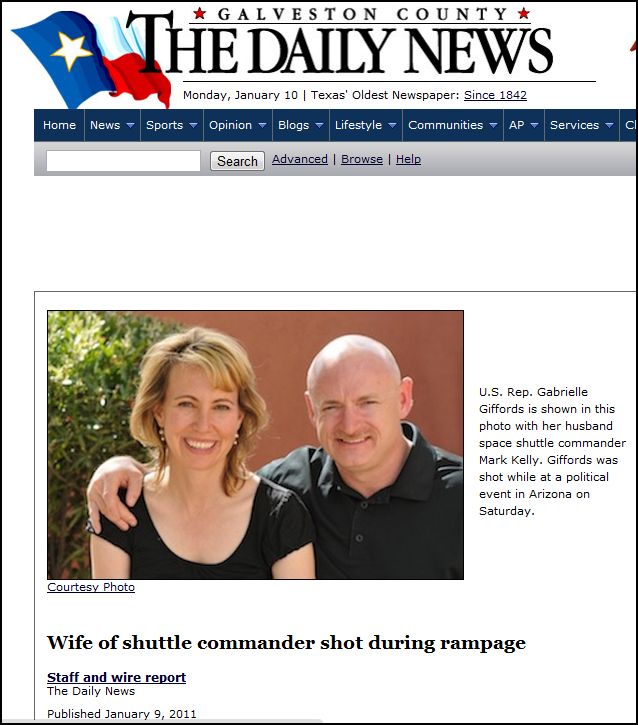 Why don't you talk about Sarah Palin's map with gunsights set on Gifford and others?
http://www.boingboing.net/2011/01/08/congresswoman-gabrie.html

And here I thought the news were being unfair for focusing on one shot congressman when six people died. She's a politician! A politician that was shot at a political event! How is that not something that's worthy of attention??

reminds me of an old Jewish joke.

The first Jewish President is being sworn in and his mother nudges the person next to her and says, "See that man, his brother is a doctor."

A male federal judge was killed, and the coverage is very slim. For hours after the shooting, there was very little real information; it is understandable that media put up whatever other information was available. And yes, in Orlando the fact that she was married to an astronaut is relevant, and the local angle.

Most of the coverage I saw, from a wide variety of media, mentioned her husband in passing, if at all. I didn't look at Fox, never do, but I suspect that this was not their first or main item.

I feel like astronauts are thought of as uber-patriotic, so it seems relevant. It's also really rare.

I'm glad there are other folks who are mentioning this, because I felt guilty when I got to the end of the NYT article on the story and thought, "would they have mentioned who her husband was if she was a male congressman?"

Not to mention the first headline makes it sound like first she was shot, then she up and got married on the same day.

I live in Tucson, and it's pretty astonishing how often they talk about her husband. But it's not surprising that Fox News would focus on that, because a) they are conservative and "traditional"ly minded when it comes to gender roles and all, and b) Otherwise they'd have nothing to say, since with all their hate speech and commentators who promote violence and who have crosshair photos of Giffords and others. But I don't want to get too political.

Since the national media isn't reporting on it, though, it is interesting to note that Judge Roll had also gotten death threats, and he is connected to the other issue that has put us on front pages lately--the ethnic studies debate. He's the judge who was assigned to the appeal, and now an ethnic studies defender is dead.

So, actually, there is plenty of other related issues that the media could be reporting on. They just choose marriage because it's easy to report on, it goes with traditional gender roles, it doesn't bring up real issues, and it doesn't make powerful enemies. It's sad but true.

I'm confused. That first article was a separate article giving extra information, wasn't it? So there was an article about the shooting, and then a linked article saying, "oh, btw, she's married to an astronaut."

Frankly, that doesn't seem out of line or sexist to me, as it stands. If you find examples of news stories about a man married to a more successful woman, which do not include an accompanying article about her, that will make this one an anomaly.

Maybe this is just me, but when I hear about shootings/other tragedy's resulting in death, I think immediately of the family. It seems pretty likely that any story of her shooting would mention her spouse and his occupation, regardless of what it was.

If she was a man who she was married to would not have been in the headline. Her husband and family should be mentioned in the stories but a Congresswoman getting shot should be the only headline. She is important in her own right, not because of her spouse.

The first time I saw the mention of her husband, at the bottom of a NYTimes article, I immediately had to go and check, because I was incredibly afraid that he was in space right now -- that would be terrible. His brother is, not him. So the fact that that first article at least mentions his flight date is good.

Six people DIED. I'm more disturbed that the six dead people are becoming a footnote in the story.

If I remember correctly, foxnews initially had an article titled "Bio Gabrielle Giffords" that literally had a paragraph about her, then ten or so about her husband, and a picture of her husband. It was like that for several hours before they either changed it or replaced it.

Even some foxnews commentators called out on it.

And when the Challenger crashed and fried, everybody said it was to be expected since flying in space was so common nowadays. It was a big deal to be an astronant back in the day, say forty years ago; now, not as much. It's like being a minor hollywood celebrity -- noteworthy, but not interesting enough to make him the focus of the article. If a male congressperson had been shot then I'd expect one line about his wife who was an actress.

These flights are so routine now, that status of the flight doesn't even make the news unless something goes horribly wrong. It's difficult to make the claim than an actor is a big deal when the movie he is starring in never gets a mention.

The same could be said if Giffords was male and his wife was an astronaut. Being an astronaut is still pretty rare, as routine as flights have become for the public.

"Maybe it’s because I’m a space geek, but I found the information about her husband to be interesting in the context of the story."

So who cares if the story was interesting? It's not about him.....oh wait, it is about the men.

[...] Some newspaper editors really wanted you to know that Rep. Gabrielle Giffords was the wife of an astronaut. [...]