Mab R. sent in a nice example of how children are socialized into gendered expectations. Chunky Monkey Mind has a post about the cut-out trading cards that appeared on the back of Cap’n Crunch cereal boxes a while back. Each card features a Cap’n Crunch character. Here’s the card for Smedley: 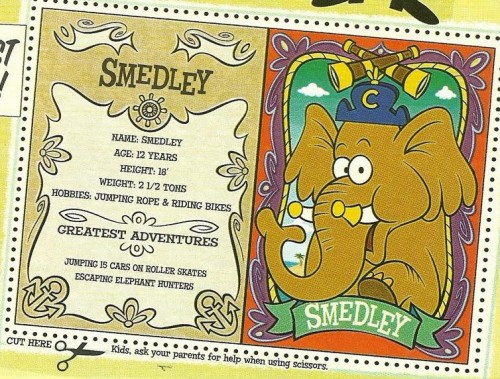 Ok, so for the male character we get basic stats, and he’s clearly an active guy who has thrilling adventures.

On the same box that featured the Smedley card was a card for Magnolia Bulkhead, who is shown with hearts hovering around her face as she clasps her hands together in rapture: 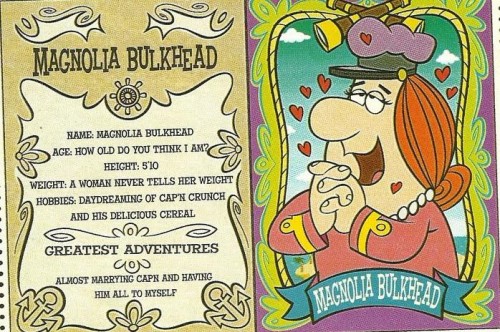 But of course, being female, she isn’t going to give us all of her vital statistics — in particular, age and weight are secrets women should guard carefully. Also notice the reinforcement of the idea that women are obsessed with romance. While Smedley’s hobbies involve action, Magnolia’s only listed hobby is daydreaming about a man (and his cereal). And her greatest adventure? Why, almost getting married, of course. Yes, the most amazing adventure of her life is something she failed at, but since it held out at least the possibility of romance, and she’s female, it was still the highlight of her life.

Ah, gender stereotypes! Fun for kids of all ages!

I agree the Magnolia one is terrible, but how do we know that Smedley is male? I don't think it's explicitly stated on that card. (Yeah, I know there are all the stereotypes there--the ones you mentioned; the blue hat; the "default"--but are you just assuming?

Not to mention we are left to assume that Smedley the Elephant is, in fact, a male character.

Smedley is a male name.

It's not just the romance though, the card also caters to the old idea of a woman as insuficient in her own right. Apart from the superficial stats, she has no real identity of her own. Her whole existance seems to circle around this captain.

At least she has a sir name.

Age may also play into this....Smedley is 12, so a child. Magnolia is drawn as an adult, probably at least middle aged, woman lusting after the Captain, who's definitely up there in years. Was Magnolia a 12 year old girl, the card would probably still be quite stereotypical, but the age and weight stats would likely be much less prissy, and they'd switch out marriage for, IDK, dress up or some 'girly' sport.

I will point out that I've always thought of jumping rope as a more girly sport. So, there's points for that. And Smedley occupies himself with other pretty gender neutral activities- riding bikes and roller skating.

I am so happy this was posted! I almost sent it in when I saw it. How outrageous!

I was to understand that these were "retro" cards, referring to characters that existed in an age where that was the norm. I had a good laugh about her card when I saw it and didn't think it really reflected on any legitimately modern values. Any "retro" product is probably not being aimed at children of the day, but people who would remember the original product fondly or otherwise, but this article makes no mention of this and instead purports this image as being both relevant and aimed at a young audience. I find this intellectually dishonest at best and outright slander at worst. I'm sure there are plenty of images that could have better supported gender typing for /children/.

I mean, sure, Smedley is a boy elephant. But he's also an elephant. Not human. We're looking at cross-species gender issues? IT'S AN ELEPHANT. It's listed activities are two things that would be funny to see an ELEPHANT do. Fine, the human female character fits into an awful female stereotype, existing solely to marry the Cap'n. And that's wrong. But don't go comparing her to a 'male' character who is another species.