If you are a bit of a linguistics geek, then Jeff H. sent in a treat for you. He found a detailed map of accents/dialects among English speakers in the U.S.: 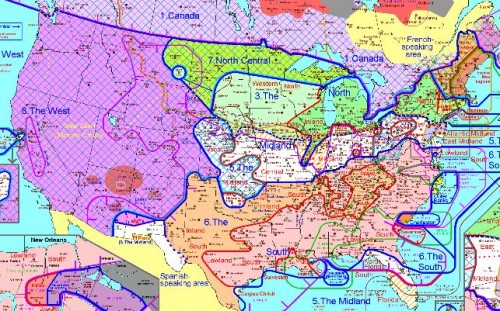 The creator, Rick Aschmann, is a professional linguist, though the map is described as a hobby not related to his work. It appears to be based primarily on data from the Atlas of North American English (ANAE).

A caution: Aschmann says, “I have not included AAVE [African American Vernacular English] in this study, since its geographical distribution tends to be independent of ‘white’ dialects.” That’s an important omission to keep in mind. I went to the ANAE website and also did a general search for a map of AAVE prevalence, but I haven’t been able to find one

And there is one area in the continental U.S. where the majority of people do not speak English: the parts of Arizona and New Mexico, shaded a sort of coral color, where indigenous languages are still more prevalent than English.

If you go to Aschmann’s page, you can click on sections of the map and go to a list of representative recordings of people who represent the dominant speech patterns there. You can also get a very thorough explanation of all kinds of linguistic differences that are beyond my level of interest/comprehension.

This is a horrorshow of impossible-to-read chart junk. Great data obscured by an undigestible presentation

Yeah, even after going to the site with the blown up map, I'm having trouble understanding what's going on because the site is so jumbled with text. The audio pronunciation clips page that comes up when you click on a state seems to be malfunctioning: when I click or right click on it to try to go to a YouTube video example of the dialect, I am navigated back to the map. Very frustrating, because I was very interested to see the different dialects in North Carolina where I live.

“I have not included AAVE [African American Vernacular English] in this study, since its geographical distribution tends to be independent of ‘white’ dialects.”

Having traveled all over the country, I'd wager that this actually has more to do with his own prejudices than the reality of 'AAVE.'

So they meant "a detailed map of accents/dialects among WHITE English speakers in the U.S." right?

Having grown up in Northeastern Ontario in a large, mixed anglophone/francophone family, I am extremely sceptical of that Ontario area that's coded not only as majority French but as not even having a well-established English minority. My experience, combined with a quick search of the demographics of the towns in that area, would put it at 60% English, 40% French at the very most.

I have no idea where he got that data from, but I would take the rest of this map with a huge grain of salt.

Also, is there a reason why this is being presented as a map of U.S. English here when it is in fact a map of North American English? You have Canadian readers too!

This is a nice start, but I strenuously question the lumping of all the Western accents into a single accent. The way people in the NW speak (Oregon, Washington, Idaho, and part of Montana) is substantially different from pronunciations found in Southern California.

What a confusing map. Nobody wants to expend time and effort deciphering maps of this sort. It could have been presented in a much simpler, more accessible manner.

I agree it's a mistake to lump Western accents into one very large block. Bet there are significant varations within Cali itself.

This is truly fascinating. Yes, it is complicated and hard to digest, but for people who are interested in this sort of thing (like me) it's much better than a simple map. It would be interesting to see a map of AAVE trends.

I also thought it was interesting that all of the voice recordings from Alabama were of males. Not sure what that means.

What I'm getting from the comments is this might have been an interesting project if it had been done correctly. It sounds interesting, I love talking about accents and dialects to people from all over, and I thought this would be cool, but I guess not. Try again? I would love to see a better and more inclusive version. Perhaps the maker is a linguist but not a map-maker, and somewhat like most people when they don't know or can't hear a difference, assume there isn't one. For example, recently someone tried to describe a California accent to me (I still don't know), and people from the Northern states tend to think everyone from the south sounds the same, or even a lot of white people think all black people talk the same. I don't think this is correct, but he's a linguist and I'm not. I'd assume he would be thorough and tell me more things than I can really pick up talking to people who just think it's fun to talk about... ourselves mostly. It doesn't come up what we don't know or aren't familiar with - we don't make broad assumptions like apparently this map guy has.

except for Tammy W.

love that Pittsburgh is its own subdialect. That is so true!

This would have been amazing if he'd actually bothered to do it right.

It horrifies me to see Susan Collins on the list for Maine accents. Please people, Senator Collins' accent is unique to Senator Collins. I spent the first 25 years of my life (I'm 26) in all different parts of Maine and I never met anyone who speaks like her. And for what it's worth, when I moved to New York many people commented to me and my boyfriend that they were surprised that we didn't talk like "Mainers." In my experience accents had more to do with socio-economic status than region.

Why even both putting something like this together without the inclusion of AAVE?
Thumbs down on this project.

I can't figure out what's going on with that uniform swath of Canada -- people from Toronto don't speak the same way as people from the Prairies (and even Toronto accents, for example, vary a great deal by class origins and age/generation). And that's not even including accented speech in immigrant communities and distinctive speech patterns among First Nations' communities.

The lines drawn on this map are called isoglosses, which by definition are limited to the features being studied (on this side of the line, people say "cot" and "caught" with the same vowel, and on this side of the line, people use a different vowel). The "Map of U.S. Accents" was probably used as a more general term for mass appeal, because "isoglosses of trending vowel changes" would have had most people yawning and clicking elsewhere.

Calling The West a major dialect area does not mean that every single person in the western U.S. speaks the same all the time. It means that using the major features that have historically distinguished dialects in the United States as criteria, speakers in that area fall into the same pattern. This isn't Aschmann saying "this is what people I know talk like," this is data from lots of different speakers showing general trends.

Then again, I'm more than a "bit" of a linguistics geek, and no one likes to see her discipline misunderstood.

As a native Alabamian under the age of 75, I was disappointed that the speech sample he used (that of Eugene Walter) was so out-of-date. It sounds like Jessica Tandy's accent in "Driving Miss Daisy," or the frankly anachronistic Julia Roberts accent in "Steel Magnolias" (a movie with several problematic Southern accents).

I have no doubt that certain upper class people in previous generations spoke like that, but it is not an accent people would associate with Mobile today.

[...] whole other can of worms that I’m not going to discuss now but needs to be mentioned) that I found on the Sociological Images blog from my previous post. If I were to make any changes I’d move the line separating [...]

[...] of North America impacts the people who live (and lived) there, including indigenous languages and accents of English, and present day communication , trade , religion, and ancestry. You can see a similar attempt [...]

[…] rather that previous generations have a very noticeable accent. The Canadian accent, according to this chart, shares a lot of the features of upper-midwestern American speech. It's hardly surprising that […]

[…] from Sociological Images, a national map of U.S. accents based on research collected in the Atlas of North American English. Not represented on this map: […]

Why can't we zoom in? It's worthless unless you can read it.