Arielle S. sent in an image of an ad for a Christmas party two years ago at a nightclub in Miami. The ad says it’s a “bad Christmas sweaters party,” but as it turns out, that’s only if you’re a guy. For ladies, it’s apparently a sexy outfit party: 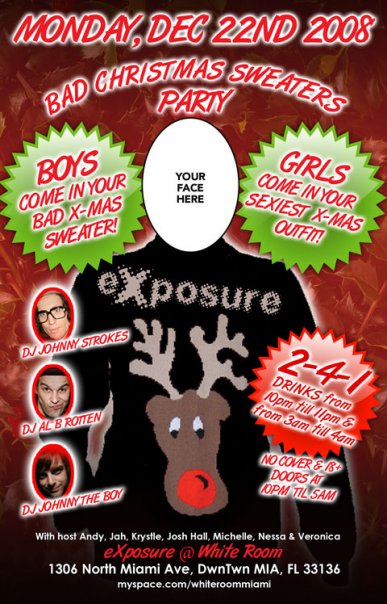 Because even at a party expressly about looking silly in ugly clothes, women aren’t allowed to not be sexy.

Similarly, Save S. saw these ads for GNC at the mall that make it clear what characteristics men and women are supposed to aspire to have: 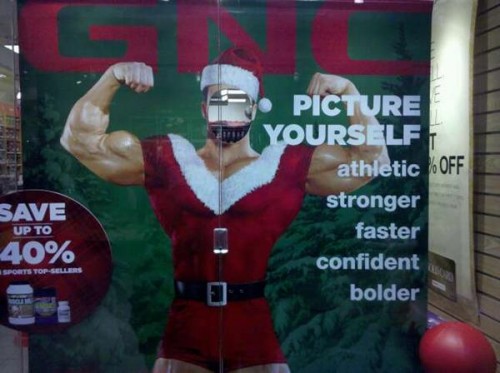 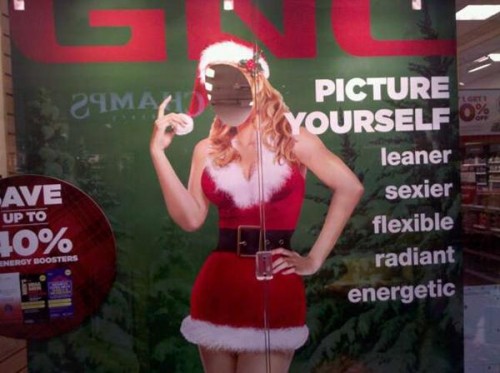 So apparently  men aren’t worried about being sexy. And women want to look…radiant? I’m not sure what product at GNC would make you radiant, but I can’t imagine it’s good for you.

In those GNC ads - I can tell you for sure that the image of the woman has been digitally altered. Her right side has been moved in. It makes her right breast look much larger, the curve of her hip is unnatural, her waist is not even from side to side, the belt got butchered and has no end; the image is a mess. It's obvious if one looks with a critical eye; not so much if one already has a negative self image, and/or is already expecting to be insulted by the picture.

What's horrible is that the original image would likely have done its intended job just fine. Perhaps the marketing department felt that they needed an image that would make *everyone* insecure about their appearance - even those who've already gone as far as they can down the rabbit hole of "fitness" - even the original model. No considerations other than profit.

Well, vitamin B complex gives your skin a healthy glow, which I suppose is one definition of "radiant." Doesn't have a damn thing to do with gender, though.

I disagree than men aren't supposed to think they need to be more sexy. Imaging any average man walking past that poster, full of unattainable rippling muscles and not thinking, "man, if only i worked out more...". While I recognize that female sexuality is exploited as an object to sell things, the GNC ad is a different problem. In this case, men and women are both being told they aren't sexy or attractive unless they look like these models...and the way to look like this is by buying weird supplements in GNC.

The sweater party thing, on the other hand, is totally a sexist double standard.

I walk by these every day and think of this blog. Thanks for bringing this sort of thing to my attention!

That sweater thing is shocking. It's like women aren't even people. They're just there to act as boner-inducing room decorations while the men have a party and enjoy themselves.

It's the whole "Ladies' Night" philosophy done for the holidays.

It was the 'flexible' that got me. Why would I want to be more flexible? And is the ad suggesting physical flexibility or moral flexibility? Oh wait, I think I just answered that....If I use the product I will become the sexiest contortionist, stripper/hooker to ever rock a cheap velvet Santa's helper costume! Map Questing the nearest GNC right now.