The Gender Imbalance in Family Movies

Larry Harnisch, of The Daily Mirror, sent in a link to a story at the NYT regarding study released by the Geena Davis Institute on Gender in Media about the under-representation of women and girls in “family” movies — that is, movies rated G, PG, and PG-13. The authors looked at all English-language fictional G-rated films released in the U.S. or Canada between September 2006 and September 2009 (a total of 22 movies). They also looked at the 50 highest-grossing films for both PG- and PG-13-ratings, meaning a total of 122 movies is included in the analysis. They focused on characters that were either mentioned by name or spoke at least one word in the movie, leading to a sample of 5,554 characters. Of those, 70.8% were male and 29.2% were female.

Consistent with patterns in Hollywood in general, women made up a small proportion of directors, writers, and producers in the movies studied:

The authors found that movies with female directors and/or writers had more female characters than those with male directors/writers, with writers seeming to have a stronger effect than directors:

Comparing the results of this study to an earlier analysis of films from 1990-2006, we see that the gender imbalance isn’t improving over time (though since the methodologies differed slightly, the data aren’t absolutely comparable and so are more indicative of a general trend; the authors did make statistical adjustments for the methodological differences): 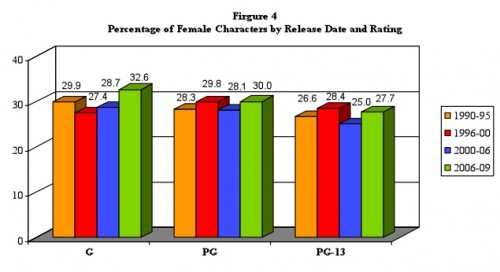 Of course, none of this gets at the content of the films. The study found that female characters were generally younger than male characters, made up only 17% of group or crowd scenes, and often had plotlines that centered entirely around interests in romance.

The most asinine comment I ever saw about the dearth of women behind the camera in Hollywood was along the lines of "Well, why don't more women direct? THEN we'd have more female directors. DUH," as if women can just wake up one morning and say "Gosh, I think I'd like to make a movie. Let me just shake several million dollars and a movie studio out of my couch cushions!"

Oh, I don't even want to think about Disney movies and the Bechdel Test!

Luckily correlation and causation are inextricably (inexplicably?) linked. Women should certainly be better represented among directors, writers, and producers, but their absence from those ranks doesn't necessarily explain their absence as characters.

Interesting study. I've recently started critiquing movies based on the feminist movie test meaning it must fit all three criteria.

1. Is there more than one female character?
2. Do they talk to each other?
3. Are the talking about anything other than men?

Pullquote from the RSS feed: "I'm extremely proud of her Oscar," James Cameron said of his former wife.

This is in no way shocking - but I love seeing it laid out in pretty graphs. (The better to add to ranty blog posts)

Definitely noticed this, and I recall noticing it even as a very small child. It really ties into the idea that "men are people and women are women" (or, as far as youngsters are concerned, "boys are children, girls are girls"). If there is a character that's gender does not have any particular bearing on the role, that character will likely be played by a man or a boy. Women and girls are love interests or mothers, unless they are tokens. Weirdly, the most glaring example of this for me is the cartoon 'Rocket Power:' a 'four-man band' made up of 3 9-year old boys, and 1 11-year-old girl. For a good chunk of the show, she isn't shown interacting with anyone but her younger brother and his friends. No girl friends (they added some later, but they are hardly of consequence) or boys her own age, and the only other close-to-major female character (a cousin of another boy) is met with hostility. The main characters do not have a mother, their father does not have any recurring female love interests, and their father only hangs around with men (who has a family member join the cast, a nephew). The only teacher shown is a man. The older kids who pick on them are all boys. The annoying tag-along kids around the neighborhood are all boys. The other two boys have mothers, but in their rare appearances, they're obnoxious harpies. Reggie seriously seems to be just proof that Nickelodeon likes girls....but only one, and her entire life revolves around her brother, who's probably at a totally different point developmentally.

I'm surprised that no one has yet commented on the title of Figure 2, 'Occupational Title by Biological Sex'. I find it quite hard to believe that the researchers went to the trouble of finding out the biological sex of every director, writer, and producer.

[...] For further reading on gender representation in movies, check out Sociological Images’: “The Gender Imbalance in Family Movies.” [...]

[…] Sociological Images has some interesting stats on the gender imbalance in family movies. […]