One of the things that continually stuns me about the U.S. wars against Iraq and Afghanistan is how little the average American is expected to sacrifice. Yes, many Americans are losing loved ones in this war. Other than those immeasurable sacrifices, however, most Americans are not asked to change a thing about their lives.

In contrast, during World War II, Americans were asked to make significant sacrifices, changing their daily lives and consumption patterns. Carpooling, for example, to save gas and rubber and staying off the phones.

Vintage Ads posted another great example of government propaganda encouraging the average person to change their lives for the war effort. In this case, the propaganda is British and they implore citizens not to waste food: 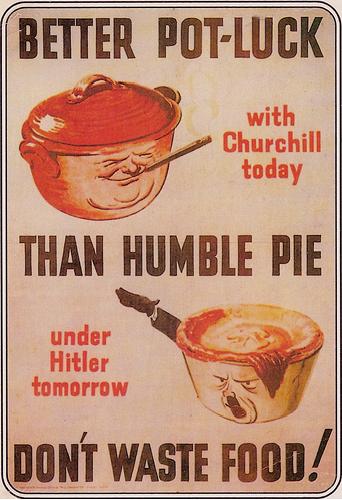 U.S. propaganda and advertising similarly encouraged citizens (i.e., women) to save food and stretch their rations (both from 1943): 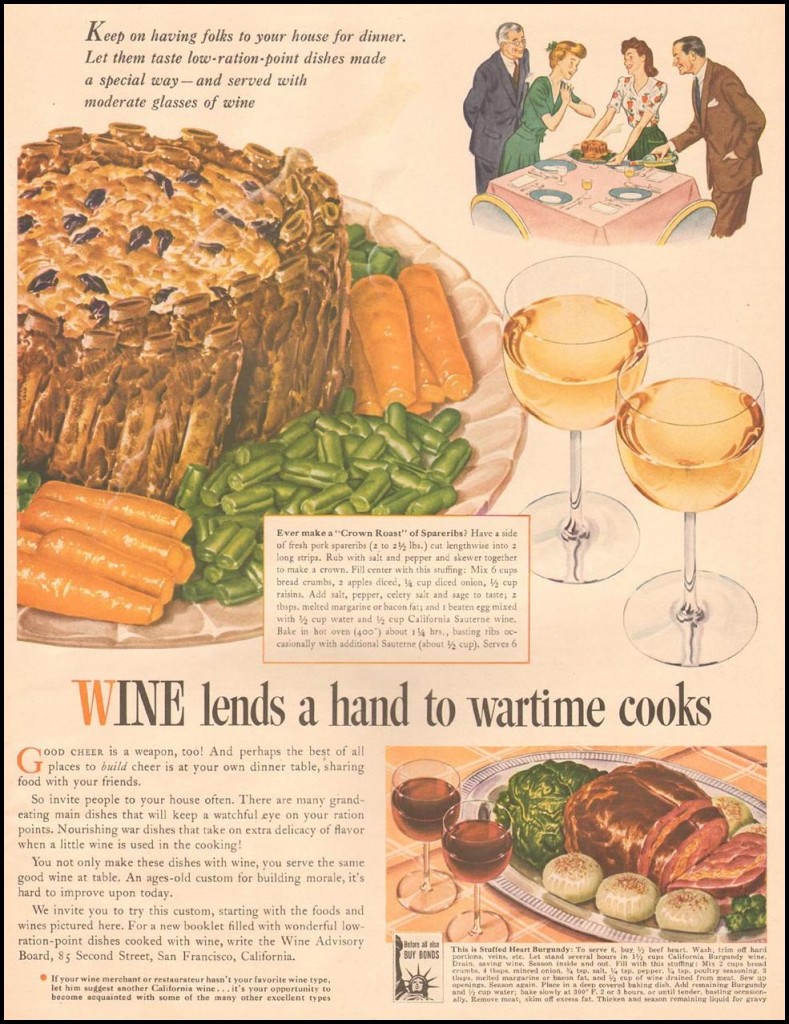 World War II was a larger effort by orders of magnitude, though, and unlike now, it was necessary to divert resources from civilian distribution in order to supply the troops. We've had 1.6 million troops rotating through Afghanistan and Iraq over these nine years, while 11-13 million U.S. troops (depending on which statistic you prefer) were involved in WWII in just over 4 years of active U.S. involvement, in theatres spread across two oceans (and the Mediterranean Sea) and three separate continents. Afghanistan and Iraq are both smaller than Texas.

But I do believe that we, as a nation, should be more mindful that we still have troops fighting and being injured (if not killed) every single day. A war report should lead the evening news programs. Mother Jones magazine posts a photo early each morning on their website entitled the "We Are Still At War Photo of the Day" that really brings it home.

(Unfortunately) this is exactly one of the major lessons we learned from World War I... from that point on, the United States has maintained a very large and well-developed Military-Industrial Complex. World War II expanded this (but, of course, the scale of WWII was immense and couldn't avoid impacting the "everyman's" life). Since WWI we have never returned to a "peace time" military. The Cold War exacerbated this... maintaining full readiness in terms of both military personnel and the related industrial systems/organizations.

As a result, we have 1.5 million active members in the Armed Forces... second only to China.... In addition, there are another 1.5 million reserve forces. If you include paramilitary and reserve, we're actually 8th after countries like Russia, India, Korea and Iran. HOWEVER the United States is actually 40th in terms of active military per capita (behind even France and Norway).

All that said -- the reason wars like WWI and WWII caused far more personal sacrifice (rationing, etc.) is because of the scale of the wars, the need to scale-up of the Military-Industrial Complex for the war effort, and so on. The wars of the later half of the 20th century and moving into the 21st century were all within the *capacity* of the U.S. "war machine." Factories didn't have to be re-purposed for war, raw materials didn't have to be diverted, etc.

It boils down to the following... We made the decision to build this Military-Industrial Complex so we could always be in a state of "readiness" and efficient. The effect is a well-functioning military, but one that is somewhat 'invisible' because it is built into the fabric of our society... the same way our road maintenance and hospitals function. We only really 'see' them when they don't work. This removes the personal/wide-spread social pain of war, but it also makes war less real.

The thing that's changed most since World War II is the scale of the American economy -- which has expanded dramatically -- compared to the scale of the war effort -- which in relative terms is much smaller. World War II was a total war that called for the complete reorienting of the American economy -- US auto manufacturers stopped making cars, for instance, because their factories were entirely given over to war production. Post-war, the expansion of the economy allowed for the creation of the military-industrial complex, which was able to keep churning out weapons and military equipment at a pace previously only possible duirng a war economy.

What's interesting to me about several of these ads is that they aren't propoganda per se, in the sense that they're direct from the government telling you to ration. Instead, they're taking advantage of the situation imposed by rationing. For instance, due to rationing, all you can make is some disgusting liver-loaf thing -- so why not cover it with our dressing, to make it more palatable? Or if you get everyone a little tipsy with wine, maybe they won't mind that the food is second-rate! The modern equivalent might be, say, auto companies that take advantage of high oil prices by boasting of new fuel-efficient cars.

The Second World War was what's known as a total war--it was about who ran out of resources (men, weapons, food) first. The Allies and the Axis bombed each others' factories, docks, airports, train stations, historically and culturally significant landmarks, civilians. The end result was always going to be almost complete destruction of one side.

The wars in Iraq and Afghanistan are more like a return to the 19th-century model of warfare. The aim is not to totally destroy one's opponent, but to minimize damage to oneself. The country doesn't have to devote all of the resources it possibly can into this endeavor.

Really it's the Second World War that's the exception here, not the current wars.

Lisa obviously hasn't tried to buy any ammo in the last few years.

In England during WWII there was a very real shortage of food, because imports weren't getting in. People HAD to eat more carefully because there simply wasn't enough otherwise. Today our involvement in Afghanistan isn't preventing us from buying food from around the world and getting it here, so there's no need for us to cut back on food.

Also WWII involved a huge stepping-up of military capability (personal and technology), none of our more recent wars have done so to that extent so the rise in demand for military funding has been lesser.

Of course we ARE paying for the defense budget with our taxes, however when we aren't at war anywhere that doesn't seem to stop the MoD from spending lots of money preparing for things that might happen.

I'm not a communist, and in any event I don't think any economy run under the name of communism has actually really given “to each according to his needs, from each according to his ability”, Never the less, there is, to me, a real question about our “mental” evolution as a people. True, the industrial nations have largely stopped having slaves and have become *more* enlightened in their treatment of women and minorities (although hardly totally enlightened). Still, as this post points out, we are not voluntarily, to say nothing of being asked to make sacrifices in reference to the war.

The thing is, if we reduce our demand for oil, for example, we will accomplish several desirable goals. Perhaps the least of these is that we will likely positively affect the political process in the Middle East. True, with smaller oil revenue, the super-rich of the middle east and their government lap-dogs will allow less money to find its way in to the hands of the poor. But maybe the poor will find a way to have the smaller pie more equitably sliced. And in any even we will have a much smaller need to invade or otherwise station troops in the Middle East if we buy less oil from them. That was part of what terrorists actually objected to (as opposed to what neo-cons say the terrorists want).

Past that, there are obvious benefits as far as climate change and other types of pollution if we drive less. And lastly we can move closer to a form of sustainable growth or just living if we drive less, or drive using renewable sources of energy. All worthwhile goals, ones that appeal to higher standards of ethics than we seem to accept and practice in our everyday life (some of the same arguments could be applied to eating meat from factory farms, and fish from commercial fishing or fish farms).

But our politicians have learned, especially in the last thirty years, that we do not want to be inconvenienced in any way. There was a brief moment after 9/11 when our government could have asked us for sacrifice. Instead our President asked us to spend money and consume, actually linking self-sacrifice to the goals of terrorists (of course, eco-terrorists might have those goals).

The dining halls in my college are trying to get people not to waste food for environmental reasons. Lately I've noticed some of them have put up similar WWII-era signs saying "Food Is A Weapon - Don't Waste It!"

If we had war-related campaigns *today* encouraging people not to 'waste' food, I could almost guarantee that, rather than useful advice on how to stretch less-costly ingredients to make healthy and hearty meals, the campaigns would be built around shaming and demonizing fat people as gluttons, traitors, and de facto promoters of terrorism. So, thank God we don't.

I'm amazed that one of the adverts tells people to use an egg in their recipe. In WWII Britain for at least part of the ime (and obviously more for city dwellers)eggs were notoriously hard to come by. Powdered egg was the thing for most people, most of the time. (Also the canned tomatoes-Britain didn't even have bananas! Canned tomatoes wouldn't come in for years.)

America generally had a better standard of living then, there are tales of children sent abroad to America (in case of Nazi invasion) and coming back and being shocked by the drabness and 'poverty'.

I'm not sure that I would call the last two propaganda so much as advertising that takes advantage of a current trend (in this case, rationing). Their product is not being rationed, so they can present it as the perfect thing to dress up the dishes that might be lacking due to limited availability of rationed ingredients. The purpose isn't to encourage people to ration, it's to get people to buy wine/seasoning, and it uses the fact that it will help them ration and be better citizens to make them feel better about buying the product.

Reminded me of this great BBC TV Show called "The Supersizers". They go and live in different time periods for a week eating the food, dressing and acting in ways specfic to an era. My favorite by far was when they went "Wartime" and relied on a rationed diet. It's really neat!

I am standing right in your corner. Fortunately money to support the war effort is running out fast. But you wont believe it, the moment the Brits reduced their military budget the ugly sisters assembled round the cauldron with big spoons to stir the warmongers up on the telly. Good thing the youth of today can not be conned into this military money making machine.

[...] War Propaganda and Personal Sacrifice — WW II in images of consumption, and a contrast to the current wars. Interesting stuff. (Via goulo.) [...]