Bug lovers will recall that the female praying mantis cannibalizes the head of her sexual partner upon mating. Wrote Leland Ossian Howard in Science (1886):

Placing them in the same jar, the male, in alarm, endeavoured to escape. In a few minutes the female succeeded in grasping him. She first bit off his front tarsus, and consumed the tibia and femur.  Next she gnawed out his left eye… it seems to be only by accident that a male ever escapes alive from the embraces of his partner.

The idea that the female mantis is a femme fatale has resonated in U.S. culture, a culture that loves to recount how human women kill the spirits of their male mates; a culture that, as Twisty Faster puts it, “…will unfairly characterize females as villains whenever possible.”

Well, it turns out that our perfect icon of the man-killer was partly an artifact of bad research design.  Faster, who blogs at I Blame the Patriarchy, reports that the study that established that female mantises decapitate their mates used starving females.  A new study has documented an entirely different mating ritual:

Out of thirty matings, we didn’t record one instance of cannibalism, and instead we saw an elaborate courtship display, with both sexes performing a ritual dance, stroking each other with their antennae before finally mating. It really was a lovely display.

There is one species…. the Mantis religiosa, in which it is necessary that the head be removed for the mating to take effect properly.  [In general, though, s]exual cannibalism occurs most often if the female is hungry. But eating the head does causes the body to ejaculate faster.

One species, okay, but there are over 2,000 species of praying mantis.  (You learn something every day.)  In any case, everyone loves a good bad-woman story and I suppose that one was just too good to pass up.

I have to admit, though, they are still bad motherf—ers.  This mantis boxed my cat into a corner: 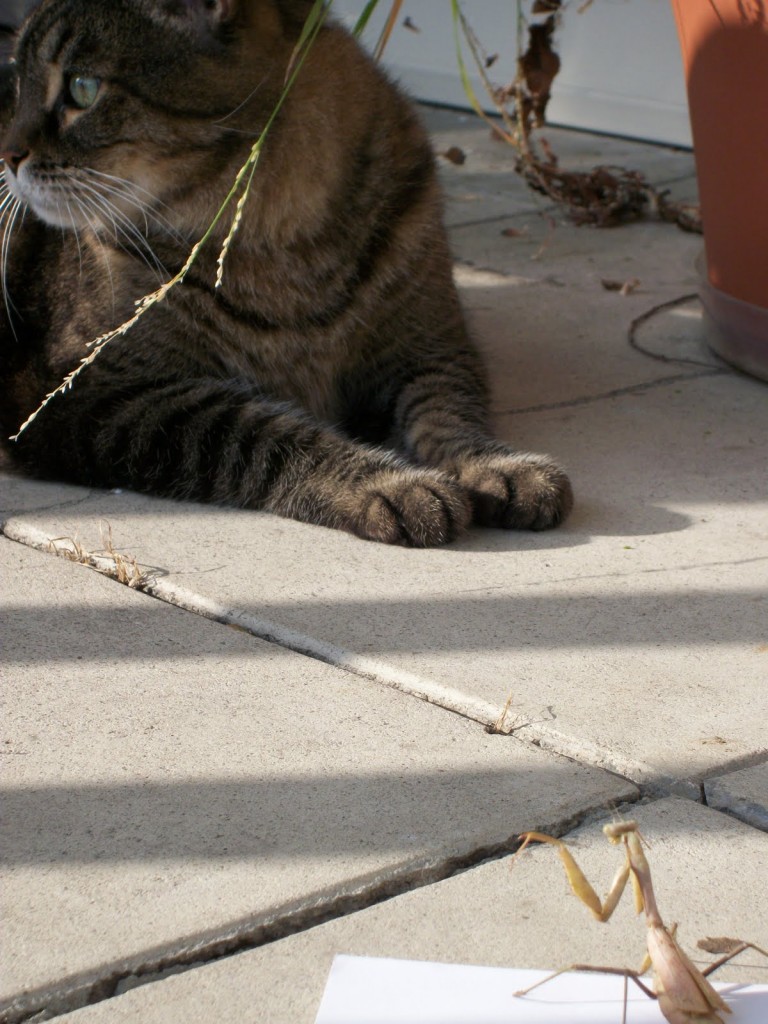 Also in projecting human relations onto animals: winners and losers of flatworm sex.

I know that this is sort of nit picky, but I must say I'm somewhat surprised that someone writing on a blog spending so much effort criticizing the patriarchy imbued into our society and the negative associations of all things feminine, outdated gender roles, etc, would use as her curse word of choice the word "motherfucker."

Actually, this is a non-issue in the entomological world. It's just the the ZOMG ladykiller idea is so appealing, people can't let it go--even though it's from an experiment that is over 100 yrs old.
There were additional mantis experiments by Roeder in the 50s, which also had similar issues--small containers, big predatory insects.

The real story is much more complex (including religiosa).

As far as I can tell from the link here and at IBtP, this "new study" is a brief lit review written by an undergrad in 2008. The original source of the results quoted above isn't clear, as the link provided by the author of the piece is broken. Based on the address of the link and a cursory google search, though, my guess is that the source of that quote is unpublished or (at the very least) not "new" as billed.

Is there any verifiable and/or published evidence about this mantis murderess myth that could be used to bolster the case made in this post?

A mantis comic on this "not always cannibals" topic: http://sphericalcow.org/?p=9

Maybe I am reading too much into it, but is the third comic from the top trying to make a comment about homosexuality being better (or atleast, male homosexuality, because it doesn't involve a woman)?

Many guys feel threatened by a strong, sexually assertive woman and think that it's a threat for the male gender. These cartoons are perfect examples of that.

This post had me scratching my head a bit -- "praying mantis" translates directly to "mantis religiosa" in Spanish, so that there are many different species under the name of "praying mantis" wasn't immediate for me.

It mentions some of the newer research on cannibalism in the 70s, but doesn't include some of the work from the late 1990s. One of these days, I'll write that up ;p

I just had a lecture series on sexually antagonistic behaviour in animals. With the mantids, the female eats the head first, but the male has nerves in the abdomen that control the mating procedure. Basically the nerves make him swivel around so that the female cannot catch him, then he mates.

There are other species that practice sexual cannibalism though,including beetles, flies, gastropods and scorpions. In fact, the red back spider male actually sacrifices itself as he swings directly into the females mouth when he finishes mating.

It should be noted that the linked study is actually a student review of a paper. A quick review of the literature shows that much of the research into mantis cannibalism actually involves field observations, rather than "shoddy research." Here are some examples:

The frequency of sexual cannibalism, mating behaviour and general biology of a wild population of the mantid, Mantis religiosa, were examined. Mating behaviour of wild mantids was similar to that of captive individuals: males were always ‘cautious’ towards females and performed no display in their precopula approach. Sexual cannibalism occurred in 31% of matings observed in the wild. Growth (weight gain/age) was restricted in wild females. Males were attracted more to heavier females which oviposited sooner after mating. The sex ratio became progressively female biased as the breeding season progressed and it is suggested that sexual cannibalism may have contributed to this bias.

Male complicity versus conflict over sexual cannibalism in mantids remains extremely controversial, yet few studies have attempted to establish a causal relationship between risk of cannibalism and male reproductive behavior. We studied male risk-taking behavior in the praying mantid Tenodera aridifolia sinensis by altering the risk imposed by females and measuring changes in male behavior. We show that males were less likely to approach hungrier, more rapacious females, and when they did approach, they moved more slowly, courted with greater intensity, and mounted from a greater distance. Similarly, when forced to approach females head-on, within better view and better reach of females, males also approached more slowly and courted with greater intensity. Thus, males behaved in a manner clearly indicative of risk avoidance, and we support the hypothesis of sexual conflict over sexual cannibalism.

Adult populations of the mantid, Tenodera sinensis (Saussure) initially were male-biased, but females outnumbered males by the end of the life cycle because mortality was higher among males than among females. Male mantids were the most frequent items in the diet of females during oogenesis, when food limitation generally is greatest. Males had an 83% chance of escaping cannibalism during any given encounter with a female; however, females continued to attract males after first mating, raising the cumulative probability of male death with increasing number of intersexual encounters. We suggest female mantids continue to attract and cannibalize males beyond their need for sperm as a strategy to alleviate food limitation during oogenesis. This is more parsimonious than the adaptive suicide hypothesis, in which male fitness is enhanced by investment of his biomass in his offspring, since our hypothesis does not require that the victim share parenthood with his cannibal.

Several hypotheses have been proposed to explain the evolution of sexual cannibalism. The foraging strategy hypothesis states that sexual cannibalism may arise as an adaptive foraging strategy, providing females with the nutrients to increase future fecundity. Yet, very few studies have found that nourishment through cannibalism translates into increased fecundity. One explanation for this may be that most of these investigations have concentrated on sexually dimorphic spider species with tiny males that do not significantly increase female body mass on consumption. The current study focuses on the praying mantid, Pseudomantis albofimbriata, a moderately size dimorphic species with relatively large males. Cannibalistic females of such species may be more likely to gain nutritional benefits from male consumption, which translate into increased fecundity. Here, cannibalistic females substantially improved their body condition and subsequently produced heavier egg cases than their noncannibalistic counterparts. An additional prediction of the foraging strategy hypothesis is that sexual cannibalism will increase with decreasing female condition. We found that the prevalence of sexual cannibalism in this system was indeed affected by female body condition; females in poor condition were more likely to consume their potential mates than females in good condition. Additional analysis of the data refuted the relevance of each of the remaining hypotheses for this species, providing clear evidence for the foraging strategy hypothesis as an explanation for the maintenance of sexual cannibalism in this species.

And so on and so forth.

Sexual cannibalism is pretty extensively recorded in insects as well as other arthropods, and seems to correspond with innate sex biases (i.e. biological biases in sex determination that lead to a higher percentage of males than females in the population) as well as the nutritional requirements of females during egg production. Is there a cultural perception of mantis sexual cannibalism that contains anthropomorphism and value judgment? Certainly. But to claim that a bunch of research is "shoddy" because a freshman student paper claims such without citation of the literature is, to me, kind of unfair.

[...] Ok if you have a spider/insect phobia don’t go here – it seems that the Praying Mantis doesn’t bit the head of her partner after they shag and the research was [...]

There is also quite clearly a factual basis to this belief. The only citation given in Lisa and Twisty's posts was another poorly referenced blog entry which indicates that cannibalism occurs in 5-31% of mating acts. This hardly qualifies as an urban legend.

Twisty's assertion that the original Howard study used starved subjects seems to be pure fabrication. The claim was in no way supported by her only citation.

As near as I can tell the more recent study which vindicates the female praying mantis was conducted in 1984 by Liske and Davis. This is a best guess as the study is not named anywhere on any of the three blog posts (Twisty, Lisa, and Serendip). In the Liske study the subjects were fed ad libitum. I do not see how this could be considered a more natural scenario. What carnivorous species enjoys a continual surplus of food in the wild?

It seems to me that Lisa and Twisty have both committed the very same sin they are accusing others of - they have latched onto a poorly researched point of view on the basis that it resonates with their ideology.

I think the humor of the comics posted comes from the discordance between the idea of mantises killing each other and our more tender ideas of sex and courtship. Sort of like a "Ha! Good thing we're not mantises!" Nowhere in these comics do I see it implied that human women are maneaters. Not that that link isn't ever made in our culture, just that these comics don't really illustrate it.