An anonymous frequent reader sent in this Calvin Klein jeans ad that has been removed from billboards in Australia after the Advertising Standards Bureau banned its display on the grounds that it implies sexual assault. I’m putting it after the jump because it might be triggering for some people. 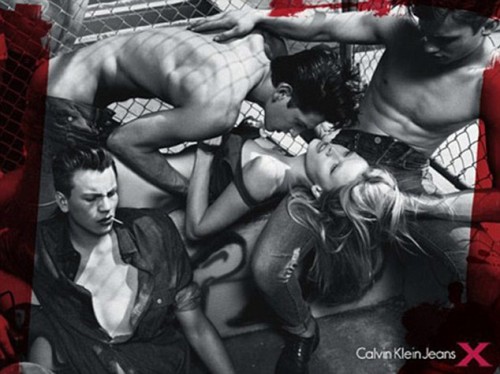 According to the Daily Mail, the Bureau said the image is offensive to both  men and women. A Bureau member explained:

Reminds me a lot of the infamous Dolce & Gabbana ad.

What I wonder is how the company thought they could sell jeans by showing a picture of sexual assault. I would think it would be a negative thing- buy these jeans because they're what rapists wear?

I have so much trouble choosing the feminism I want.

Gee, I wonder why many people see this image as implying a violent sexual act--perhaps because we live in a rape culture? Perhaps because she is depicted as passive and they are depicted as looking ultra-agressive and violent. I think to assume a consensual sex act is a serious and dangerous assumption. Perhaps if our culture were not a culture where rape is prevalent and frequent, we could re-configure this image as something other than what it seems to depict. There is no question that it depicts and reinforces female sexual passivity and male sexual aggression. She could even be dead. Any kind of feminism that wants that is not really feminist. Of course you can want to have sex with three boys, but only if you are consenting--nothing in this image implies consent. Nothing. That imaginary is not one that this misogynist culture incorporates.

I see sexual tension, but I don't see violence in this picture. I'll leave the discussion of the attractiveness of the guys to people who are attracted to guys, but she look like she is bored and trying not to look bored.

And if you crop out the bottom 3/5, right below the middle guy's nose, it's clear that those two guys are more interested in each other.

I think we need to be careful about assuming a woman in a sexual situation with more than one man is in danger or being forced. I know I would (and have) enjoyed very similar situations in the past. (Although I hope I didn't have that look of boredom on my face. That guy in the corner looks like he Has A Grumpy.)

You can indeed read multiple meanings in it. But there is one thing: she doesn't look sexually excited. I would even say that she looks annoyed. it doesn't look directly like rape, but it certainly doesn't look like she enjoys this...

What is with this trend of interpreting fashion photos literally? Has nobody in the blogosphere ever taken a Photography 101 or community college art-appreciation class? Are we all so thoroughly programmed by Hollywood naturalism and "reality" TV that we reflexively read every image involving people as a depiction (or, in Gwen & Lisa's extreme case, and endorsement) of a lifelike act being performed?

Geez. It's getting kind of stupid. But this photo gave me a little laugh, as it reminded me of so many similar shoots I've worked on. What generally happens is, the models are contorted into hundreds of spontaneous poses over the course of an hour or two, sometimes ten, with (thanks to digital) literally thousands of exposures to choose from. The subjects are almost never Method Acting to generate some semblance of actual human emotions, but rather using their training to do something quite the opposite. When you're going back through shots, inevitably you get the giggles - you sift through some where men in a swimwear ad appear to be cuddling, where sleepy supermodels appear constipated, where a knee pointing one direction appears to suggest sex and pointing the other direction suggests violence. And in the end, you ignore the accidental subtexts and choose the images with the most well-balanced lighting and composition, and then the client and a graphic artist and a layout editor and a series of other workers all have their way with this thing that represented an imperceptible 1/8th of a second of your workday. Naturally, it's rather baffling when, later on, you hear people discussing that 1/8s as if it were a moment fleetingly stolen from a gang-rape (rather than the thing you tried while anxiously waiting for the coffee), then grabbing their digital pitchforks and torches.

Still, the question one can always ask is, "what made them ('them' being any of dozens of people who all disagree with each other) decide on THAT particular still?" And it's a fair question, especially when people without much clothing on are involved. In this case, I think the shot is about 75% perfect. But it's not about any kind of sex at all. Rather, it's about the beautiful netting of shadows from the chain-link fence that arch down the top-left model's back. The balance of diagonal weight that cuts across all of the axes. The way the primary points of brightness each coincide with a different texture as well as a position at a different depth. The natural flow between the contours of the exposed flesh and those of the clothing. It's entirely possible that no other pose of these four people resulted in composition that good.

But I hate to rain on the parade of a few late-puritanical reactionaries who see demons in the architecture whenever they think they see sex (or when a bare shoulder appears at the center of a billboard). Because it's actually quite fun to read.

I just see weirdos in uncomfortable positions with no shirts on. Like a bunch of people in an opium den.

I think if the female model was unambiguously "enjoying it" the billboard would plainly read "ORGY!!!", which would mean 1. Much of the tension would be gone, which would be inimical from an advertiser's perspective and 2. an actual SCANDAL would erupt, because nothing gets America's hackles raised like a woman in sexual ecstasy where the children can see it. As of now the poster could just as well read "boredom induced inter-gender wrestling match backstage at Prada". Also, the focus clearly seems to be on the three men. The lady is incidental enough that one could easily imagine yourself in her place, regardless of your gender, and make your own facial expressions. :3

A contextual explanation of the strictness of the Australian censorship code as applied by the Office of Film and Literature Classification (who dictate terms to organisations like the Advertising Standards Bureau) would probably help this post, methinks. It's well documented that the OFLC's standards are far behind general social levels of media acceptability and obscenity, especially in relation to sex and violence, and the depiction of female sexual body parts (see 'Snatched' by Helen Vnuk for more on this, especially the "healing" of images of female genitalia). It's also the reason so many people are getting their hackles up about the Great Firewall of Australia the government has been trying to implement, because the reach of our censorship boards (we have no bill of rights protecting citizen's access to information or freedom of speech, in Australia) is far beyond their logical requirement of simply classifying material for informed consumer choices.

This post also is a perfect example of how the organisations for media monitoring in Australia are complaints-based, because I see offensive stuff like this all the time and nobody bothers to remove it (case-point, the Government's "Are you feeling guilty yet, you disgusting Fatties?" bus-stop billboards supposedly promoting "health") so obviously this is a case where enough people actually got together to complain, otherwise we never would have heard about it.

So what you're saying is that the only way a woman would be with multiple men in a sexual context is against her will?

I have several former lovers who would disagree with that assessment.

One thing I see from these comments is an idea that rape has to be violent to be rape. I see many people talking about ambivalence, displeasure, boredom, and other things that might indicate blurred lines of consent, but then qualifying it with a "but it's not violent." While a rape act is violence, it doesn't require other physical violence to be rape. That is a misconception.

Seeing as both the US and Australia (and most other countries in the word, including Sweden and Norway both of which are very feminist countries) still continuously blame rape victims for what happened (things like she was drinking, she's had sex before, she was wearing tight/skimpy clothing, etc...) and seeing as most countries have enormous problems with rape, erring on the side of caution and not allowing media that has ambiguous lines of consent is probably a safer idea.