Redefining Masculinity: Do Men Save Lives or Take Them?

Rich sent in a fascinating example of an attempt to redefine masculinity.  At Rightly Concerned, Brian Fischer argues that the fact that all of the recipients of the Medal of Honor awarded during the Iraq and Afghanistan wars have received the award for saving lives, not taking them.  He calls this trend “the feminization of the Medal of Honor.” 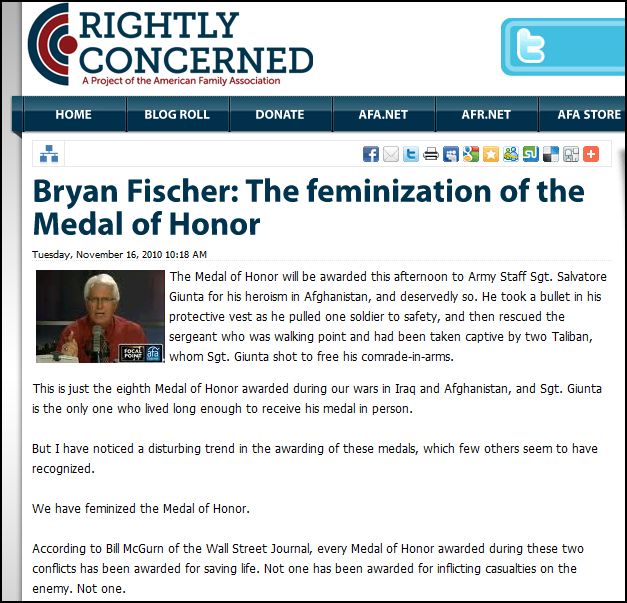 Let’s not get into a conversation about whether the Medal should be awarded for saving lives, taking lives, or both.  Instead, let’s consider what, exactly, Fischer is saying about men and masculinity.  Fischer is suggesting that saving lives is something that women (should) do.  He has arranged saving lives and taking them in a binary layered onto gender.  Women save; men kill.  When men save, they are doing something feminine.

This is in dramatic contrast to the vision of the heroic man who protects others that has long been part of the American imagination (think firemen, policemen, body guards, big brothers, dads, boyfriends, and husbands) and a very interesting example of an attempt to redefine what “real men” do.

I'm mostly disturbed that the feminization of the Medal of Honor, by awarding it to people who save lives rather than take them, is considered by this gentleman to be something we should be concerned about. THAT bothers me, because it not only sets up masculine/Feminine dichotomy, but it blatantly places masculine as the more valuable of the two.

I wouldn't be concerned if there weren't waaaaaaaay too many "Brian Fischers" in this fine country of ours. Uggh.

I just can't get past the irony that a *minister* -- a minister who never served in the military himself -- is arguing that the military has been feminized because saving people is feminine.

Fortunately the commenters over there have taken him to task!

Even if you attempt to view the world in his perspective, he's still incorrect:

The job of a soldier is to kill. Soldiers should be given awards to recognize their high number of kills. He's doing a disservice to the soldiers by interpreting their heroic efforts as simply "saving a life." He should be honoring their willingness to protect a killing machine so it may continue to perform it's normal duty (of killing). Therefore, "saving a life" can also be seen as "preserving our ability to continue killing enemies." If not for these heroic actions, we would have lost the killing services of these men. Yes, some of the folk saved are too injured to continue fighting, so they will be sent home to recover and become advertising to recruit or train more killing machines.

Okay, I need to go take a shower now and hug a kitten.

I think the whole article needs to be viewed through the lens of the current political scene. The Conservative/Christianist Right stands united in its opposition to the Obama administration. Whatever Obama does is tainted, by definition, and must therefore be denounced. Since the award ceremony hit the news cycle in a big way, it had to be dealt with.

Fischer's problem was that Obama's giving of the award couldn't be denounced via the usual racial dog whistles; nor could it be painted as socialistic, "pro-Muslim" or anti-American.

"Feminine" was virtually the only popular anti-Obama talking point Fischer had left. Thus, the tortured, head-exploding characterization of Sgt. Giunta's action. In order to agree that he deserved the MOH, Fischer would have had to acknowledge that President Obama did something worthy of approval - and for a hardcore righty, that's a no-can-do.

It's worth pointing out that this seems so be a pretty wildly unsuccessful attempt at defining masculinity. Like SerenityNow mentioned this "feminization" framing got a huge backlash even from conservative types. I definitely agree that it's part of a larger picture where men are supposed to be violent and women nurturing, yadda yadda, but it's also interesting 'cause everyone hates this particular incarnation of that stereotype.

To be clear I'm not saying most people have a problem with using femininity as an insult, or with encouraging men to be violent, etc. Personally I think this would have been largely acceptable if he'd chosen to talk about anyone other than a genuine war hero.

On top of all else, the criticism is inaccurate. Here's an excerpt from SSgt. Guinta's Medal of Honor citation:

'As he crested the top of a hill, he observed two insurgents carrying away an American soldier. He immediately engaged the enemy, killing one and wounding the other.'

So apparently a REAL man can only be honorable if he's an indiscriminate killing machine who let's his own allies lie there and die. Killing the enemy AND saving other soldiers on your side is 'feminine' (though it should be pointed out, there are indeed plenty of women in the military now! Fancy that!).

I seem to remember that the SSG killed 8 people during that confrontation. Also this article SAYS he shot at least one person. I mean come on. /Plus this war is girly for not offering the chance to kill more. / sarcasm.

Superman, Batman, and Ironman all save people on a regular basis and I never heard of them being girly.

Fischer has filed a follow-up article, where he tries to defend himself by saying he's not against soldiers saving other soldiers, but that Killing Bad Guys is a laudable and even holy cause (he uses various Old Testament passages to assert his point).

It's worth noting that the current CMOH criteria are someone who "... distinguished himself conspicuously by gallantry and intrepidity at the risk of his life above and beyond the call of duty ..."

Spot on. I've known many wives who have driven their husbands to an early death!

Not to mention that there has already been one female recipient of the Medal of Honor: Mary Edwards Walker, a Civil War surgeon and POW. No doubt there will be more to come. I hope this dude is still around so I can see his head explode.

This is fucking sick. I can't stand this. Ack. Somebody please retroactively abort this sick, sick fuck.

I am sorry, I am furious beyond using proper vocabulary at this time.

This is fucking sick. I can't stand this. Ack. Somebody please retroactively abort this sick, sick fuck.

I am sorry, I am furious beyond using proper vocabulary at this time.