In consumer society, products sell an image of the consumer to others. Chocolate, for example, can bring prestige if it comes from a particular manufacturer and falls within a certain price range.  The design and ideology behind Godiva for example, promotes a sophisticated chocolate and uses powerful imagery to convince consumers that they may attain an unparalleled experience of high-class luxury. 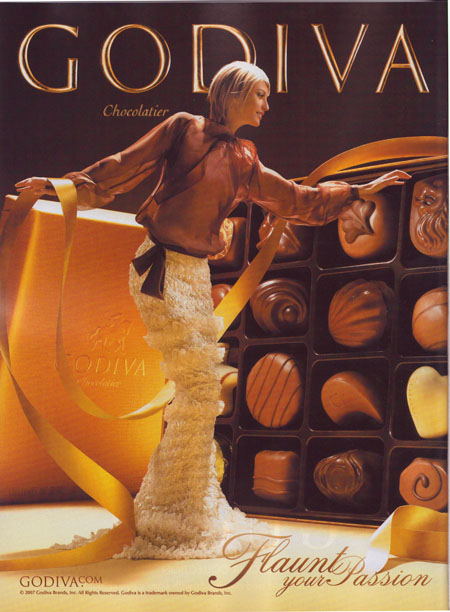 Godiva promotes the idea that consumers of their chocolates are somehow “higher class” and more “tasteful” than people who do not consume them.  As a result, their chocolates have a higher exchange value than the everyday, $1 chocolates meant for middle and lower-class consumers.

Many chocolate connoisseurs argue that Godiva chocolates taste like sugar and candle wax, failing to satisfy the European taste criteria for elite chocolate.  Nevertheless, the reputation of Godiva as luxurious is enough to satisfy many non-connoisseurs and it, accordingly, maintains a high exchange-value.  Hoping to capitalize on the trend, many popular brands have released their own line of “premium” chocolates hoping to reap profits far out of proportion to the cost of production. 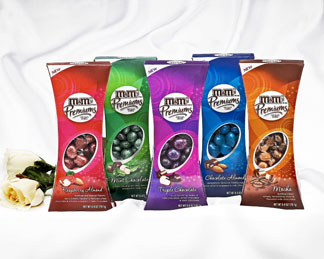 From a Marxist viewpoint, status-symbol chocolate advertising exemplifies how fetishization helps maintain capitalism. Such advertising tacitly legitimizes the elite class by reinforcing the image of upper-class superiority and by presenting the luxurious lifestyle as something to aspire to. It also helps foster false consciousness, which lulls the oppressed working class into complicity, even or especially when prices for “premium” chocolates fall suspiciously low.

Is fair trade a resolution to chocolate’s fetishism? 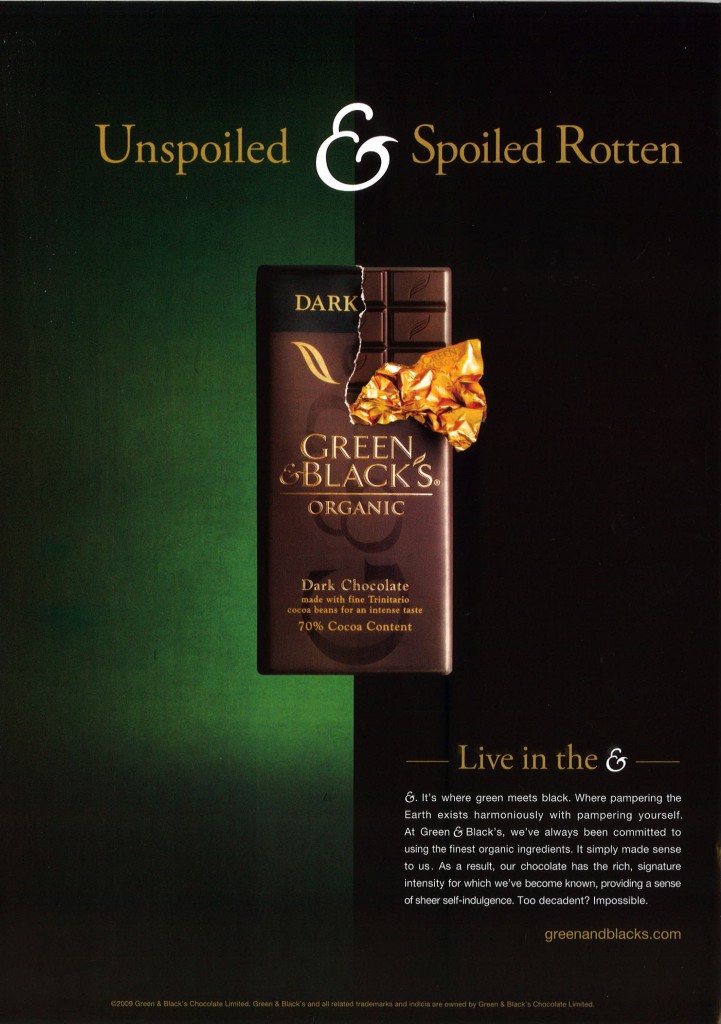 Chocolate’s fetishism is partially resolved through Fair Trade, which redistributes some of those profits back to the working class and makes the consumer conscious of the worker.

The fetishism of chocolate is only partly resolved, however, since the owning class continues to profit from the fetishism of the commodity and from the enhancing status of the “Fair Trade” label.  The purchasing of Fair Trade chocolate, you see, provides the consumer with some emotional comfort; it flatters them just as a high end chocolate product flatters buyers who identify themselves as elite. Therefore, there is an increase in the consumer’s cultural capital with the purchase of Fair Trade chocolate.  It is still fetishism to the extent that the consumer is purchasing a comforting emotion or an image of themselves saving the world, which is encouraged by advertising campaigns and wrapper designs.  However, in an interesting twist, fetishism is used to reverse the effects that it is traditionally guilty of: benefiting the upper-class at the expense of the lower-class.

Jamal Fahim graduated from Occidental College in 2010 with a major in Sociology and a minor in Film and Media Studies. He was a member and captain of the Occidental Men’s Tennis team. Jamal currently lives in Los Angeles with the intention of working in the film industry as a producer. His interests include film, music, digital design, anime, Japanese culture, improvising, acting, and of course, chocolate!

It's worth noting that many fair trade brands of chocolate are also of higher quality.

"It is still fetishism to the extent that the consumer is purchasing a comforting emotion or an image of themselves saving the world..."

--I don't think most consumers are that self-deluding; Fair Trade chocolates allow them to enjoy a treat with the knowledge that the conditions under which it was produced are a bit more fair than usual.

--I also suspect that the new "premium" lines of the other chocolate manufacturers are in fact better than the usual product. They're also not just competing with Godiva, but with the many brands of quality chocolate that have been introduced into the market over the last 20 years.

--Although having the aspirational quality of a product is usually exploited by companies (apparently cigarettes didn't take off with women until companies ran ads of pretty, elite young women smoking)*, the public, or at least the serious chocolate-consuming public, has become more educated about chocolate and is more demanding.

*I learned this while watching a documentary about advertising called "The Century of the Self."

I think part of the problem with godiva being upper class chocolate while not being all that good is that most american chocolate is AWFUL.

A german lab-mate of mine once purchased a hershey's bar, came back to the lab and nearly choked when she tasted it. It was actually pretty funny to see her amazement that people EAT this stuff. The other germans in the lab had the same reaction.

Americans don't really eat chocolate. We eat chocolate AND stuff. With caramel, with peanut butter, with nougat, with hard sugar coatings, ect, and because chocolate is sort of an accessory taste, it doesn't need to be good chocolate.

So, even if godiva isn't all that great, it's better than the more common american chocolates, and so it still seems like a huge step up in comparison and seems worth the price.

What's amusing is that Godiva has started running commercials that say (paraphrasing slightly): "We Belgians are led to understand that Americans save Godiva for special occasions. But Godiva should be shared, not saved!" For the most part it struck me as a less-veiled-than-usual way of saying "buy more of our product", but it has an interesting interaction with the point made about Godiva here.

From a Bourdieuian perspective, you could also argue that the chocolate connoisseurs need to say that Godiva is terrible in order to preserve their own cultural status as connoisseurs. If the middle-class can access high-quality chocolate without having to pay for the ultra-expensive stuff, the cultural capital of the connoisseurs is diminished.

I have only one question: Why is the "high class" lady in the first image wearing my bathroom throw rug around her legs?

Well, I am a wee bit confused about the particular use of the Marxist terminology:

"From a Marxist viewpoint, status-symbol chocolate advertising exemplifies how fetishization helps maintain capitalism. Such advertising tacitly legitimizes the elite class by reinforcing the image of upper-class superiority and by presenting the luxurious lifestyle as something to aspire to."

The thing is, this is not at all what Marx was talking about when he keyed the concept of commodity fetishism. It wasn't about images, desire for certain goods or markings of the upper-class, but a description of a phenomenon in so-called 'advanced stage in capitalist societies'. Commodity fetishism means that the social productive relations between people get mystified, so that people start to believe that commodities get created by other commodities, without paying attention to the human labour, which according to Marx is the fundamental source of value. It's about believing that commodities have their own life, or that their value is reflective upon relations between material stuff and people, rather than between people.

Now, I am all for upgrading traditional sociological and political concepts, but I can't remember to have encountered this reading of commodity fetishism before, and it seems to at least partly conflate this theory with the more colloquial understanding of 'fetish' as desire. i would argue that the analysis is resting much more on classical Bourdieu, with his idea that class disctions also get created in the social sphere of consumption, which Marx would probably have rejected.

It's faintly amusing that the author chose Green & Black's to demonstrate the Fair Trade, luxury chocolate.

They were an independent company until 2005 when they were bought over by Cabury's, who were in turn swallowed by Kraft very recently. Being bought by Cadbury's allowed G&B to expand their use of Fair Trade chocolate to more products, rather than just one. There may be something worth expanding there, about how Fair Trade is used as a marketing tool that means very little in some cases, but that is off-topic and I'd too tired just now.

Divine Chocolate, though. That is all kinds of lovely, in my opinion.

our factory is specified in making food machinery. and now we have different kinds of chocolate fountain machineries.if you are intresated in them and want more informations of our factory ,pls mail to zhejiangyy@yahoo.com or call nomber:86057113867102082

Try ferrero rocher. Extremely tasteful and not even 'really' that luxurious.

Who Picks the Cacoa for Your Chocolate? « The Augmented Environment — June 28, 2012

[...] between the producer and consumer.” Chocolate is always a luxury, of course (and is often deliberately marketed this way), and the product, at its finest, can be exceptionally delicious and exceptionally [...]

Chocolate used to be a luxury, am I wrong? I think that even today, people don't eat high-quality good chocolate because they prefer to buy something cheap. But a bar of good chocolate is not expensive at all, and I think that most people can afford organic chocolate gifts to their friends and family members.