BoingBoing reports on a BBC site, based on research by Psychologist Paul Ekman, where you can test your ability to detect fake smiles. It turns out, most people are “surprisingly bad” at differentiating genuine from fake smiles. Take the test or read more on how to spot fake smiles (after the jump). 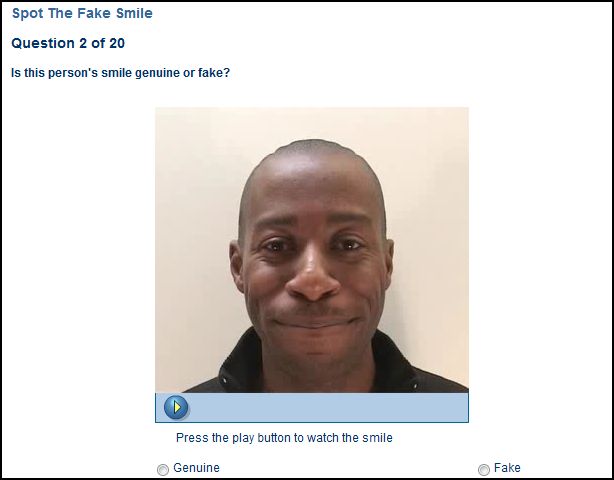 According to the study summary, most people are very bad at detecting fake vs. genuine smiles, though there are tell-tale signs:

Fake smiles can be performed at will, because the brain signals that create them come from the conscious part of the brain and prompt the zygomaticus major muscles in the cheeks to contract. These are the muscles that pull the corners of the mouth outwards.

Genuine smiles, on the other hand, are generated by the unconscious brain, so are automatic. When people feel pleasure, signals pass through the part of the brain that processes emotion. As well as making the mouth muscles move, the muscles that raise the cheeks – the orbicularis oculi and the pars orbitalis – also contract, making the eyes crease up, and the eyebrows dip slightly.

Lines around the eyes do sometimes appear in intense fake smiles, and the cheeks may bunch up, making it look as if the eyes are contracting and the smile is genuine. But there are a few key signs that distinguish these smiles from real ones. For example, when a smile is genuine, the eye cover fold – the fleshy part of the eye between the eyebrow and the eyelid – moves downwards and the end of the eyebrows dip slightly.

I guessed about 50% of the smiles correctly, which is exactly chance.  Oddly, I found myself suspecting that they were all faking.  I wonder what that says about me!

I got 18/20! Then again I've been studying psychology for 4 years now.

I was actually wondering if there would be an effect of race, gender or age on accuracy. I found the task slightly harder for people of races I don't interact with as much, and also for women (who I also don't spend as much time with as much as I do with men). Practice makes perfect, perhaps?

Okay, I read the spoiler before doing the test. Even so, I felt like I was having a really hard time detecting fake smiles. But... I got 18 out of 20 right! So either I was already good at detecting fakes, or the tips about the tell-tale signs really helped.

I got 17 out of 20 right, and I bungled the first couple because I didn't figure out the video part right away...d'oh >.<

I think I might have been decent at it because I'm constantly taking photos of people for the newspaper I work at, many times requiring a "fake" smile for the camera. So I'll often see photos of a person's fake and real smile side by side from when they're just told to smile to when I say something oddball and get them to laugh and grin. The real one is just "brighter"and more joyful, and it really is in the eyes.

I got 14/20, but probably could have gotten higher because the video was being buggy. Then again, I already knew about looking for the eyes.

I thought it was interesting how they asked at the beginning "overall outlook on life". I thought that me, being very pessimistic, was going to say "fake" too many times and that would be normal. I suspect the ones I got wrong were mostly genuine smiles being labeled as fake. I remember feeling bad because I reported so many as "fake", and then being surprised at my results.

Also knew about the eyes.

But unless they were being stimulated by something, wouldn't they all be fake?

I think I guessed by the people laughing moving more in general - almost nodding forward (like I do when I laugh).

I'd imagined that I'd be really bad at it. I was surprised.

I started doing the test and was labeling all of them fake, so I just stopped.

But I'm a little opposed to calling spontaneous smiles "genuine" and intentional smiles "fake". I rarely smile unintentionally but I can assure you that most of my smiles are sincere, if not joyous.

There's also a decent amount of literature about gender and social differences in recognizing real vs. fake smiles. Women are -- in general -- better than men.

I can't remember how it breaks down between Japanese and Chinese nationals (who never lived outside their countries) and White Americans, but I remember that the correlational differences -- even after controlling for gender -- were different.

16/20
Most of the genuine smiles made me smile myself so that's how I rated them. I looked at the eyes because I studied a little psychology but I was distracted by just how pleasant some of them were.

Wow! 18/20 smiles correct. I wonder what that says about me, especially since I clicked very low down to the "pessimistic" outlook on life.

11/20. I had heard that smiles really happen in your eyes, but those were some fake looking genuine smiles. A few of them I marked genuine because they made me smile, and a few I marked fake because I thought the person looked like an insincere person.

So if genuine smiles are "generated by the unconscious brain," how does that affect the advice that you can improve your mood merely by smiling several times a day?

It was the quack self-help I always suspected?

Huh. I got 16 of 20 -- and of the four I got wrong, I only mistook one fake for real, the other three errors were genuine smiles I took for fake.

I don't know whether I was on my guard going in or just naturally mistrustful!

I got 17/20 for guessing that three guys' genuine smiles were fake.

Anyone know what the distribution of scores on this looks like? I imagine people reporting their scores in the comments are probably disproportionately high scorers.

17/20 pow zap optimism. My roommate was talking at me the entire time too, so I glanced away during a couple of the videos... I looked for people having trouble going back to a neutral face after smiling--pressing their lips together or having a small smile as the "neutral" before or after.

I got 16/20, and I know it's a literary cliche but the "smile that doesn't reach the eyes" is a real thing and the main way I figured out which ones were fake.

I got 16/20 right. The first video wouldn't load for me, so I just guessed "fake" because of the still shot and was wrong. Aside from that, I mistook 2 fake smiles for genuine (1 male, 1 female), and 1 genuine smile (male) for a fake. I've read about the tells though (cheeks lifting, eyes crinkling in the corner). I really do wonder what the average score is.

I got 16/20. I noticed I mistook one fake for genuine, but otherwise didn't notice what the ones I missed were.

Embarassingly I used what I had heard on that TeeVee show "Lie to Me" to make my choices. What "Lie to Me" said was essentially the same thing as the explanation at the end of the videos (love Tim Roth's accent, apparently not his own).

I got 19/20 - I think that having a job where I have to constantly read people all the time helps... I only looked at the eyes, not the mouth at all

Did you notice that all the non-white smiles were fake? What's up with that?

16/20. I looked at the eyes to see if they had that "sparkle" and the eyebrow thing too, before I read the article. I also looked at how easy it was for the smiler to go back to the "normal" face.

18/20 and am VERY impressed with myself.

Booyah! 19/20! I had trouble reading the first white guy.

Wowie. I got 16/20. I noticed how suspicious I was of the women but I was easy-going on the guys. Eeek.

20/20 here, I didn't read the blurb about noticing fake smiles beforehand either, but I've always been very good at reading other people's emotions, ever since I was very young so I'm not surprised that I got them all right. For me it's about looking into the eyes, not at the mouth. I find that a genuine smile makes me want to smile too whereas the false ones leave me feeling quite empty (not very scientific haha).

I was actually the opposite in what I wanted. I thought "THEY ARE SO CUTE! MUST BE A REAL SMILE!" for most of them. ><

I got 16/20. I knew to look for eye crinkling and that was about 90% of what I based my decisions on. Anyone who did not do the crinkling got Fake, but many did it so a couple of those seemed fake for other reasons. But I did miss 4. I put my optimism at second to highest dot and my confidence at slightly more confident than neutral.

I got 14/20. I tended to go for if the person laughed or not, as well as the eye crinkles. Context/ sound would have been helpful.

12/20 The ones I misidentified were fake smiles being mistaken for real smiles. I suck.

[...] unconscious brain generates my genuine smile back to the stranger who smiled at me. According to an article from Sociological Images, when people feel pleasure, signals pass through the part of the brain [...]

I notice if the smile is fake...just read their eyes. You know the eyes are the window to your soul. If someone is lying through their teeth you can detect it; 1. they don't look you in the eye, 2. you feel something isn't right (listen to your instincts, normally the first reaction is right).
Took me years to trust my instinct.