Made in America‘s Claude S. Fischer posted this figure depicting the percent of the voting-age U.S. population who voted in presidential elections, 1824-2008: 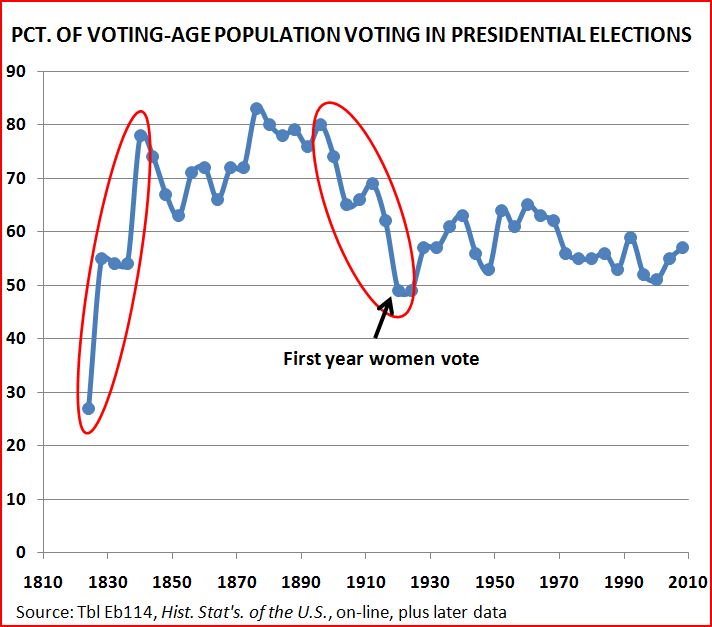 The figure shows radical shifts in the percent of the voting-age population that turned up at the polls, putting the recent Obama bump in perspective.  Fischer narrates two of the trends:

Americans streamed to the polls at rapidly growing rates during the antebellum years (the upwardly slanted oval) probably because: competitive two-party politics emerged; barriers to voting such as property requirements were lowered; states added more polling places so rural voters did not have to travel as far; a growing spoils system provided more government goodies for the victors; and the parties made elections entertaining – parades, fiery speech-making, and well-lubricated election days… By the 1880s and ‘90s, voting rates hit about 80 percent.

The downward oval is accounted for, in part, by women.  Women were granted suffrage in  1920 but, as Fischer says it, “…it took a while for women to get into the habit of voting.”  The drop started before this, however, so there’s more to it.  Fischer continues:

One factor was declining party competition; the Republican and Democratic parties retreated to different regions of the country.  In addition, two general sorts of innovations helped discourage voting: changes in rules and changes in incentives…

Native-born, upper-middle-class, largely Protestant Progressives were able, after much struggle, to reform election rules in many places… The new rules narrowed suffrage by, for example, requiring voters to be citizens, to register long before elections, and to pass literacy tests to vote. Other rules eliminated straight party-line voting… and even party identification on ballots, making it more difficult for less-educated voters to know whom to vote for. These moves raised the barriers to voting and helped drive down participation in the North. (In the South, of course, new Jim Crow laws essentially prevented any blacks from voting.)

The institution of civil service employment reduced other financial incentives to vote …many Americans voted in order to get jobs for themselves, their relatives, or their friends. The fewer the positions filled by political appointment, the less the incentive to vote…

…government reforms also made it harder for the parties to raise money… [and t]hat, in turn, reduced the hoopla – the parades, bands, and such – and the free goodies that parties could dispense on election day. By the time women got the vote, a lot of the fun had gone out of voting. Turnout rates fell to about 50 percent.

Read Fischer’s full postfor his thoughts on why Americans do and don’t turnout to vote today.

There's a fantastic New Yorker article on the history of voting in America here:

The anecdote that starts the story is fascinating: a lurid description of election day in Baltiomre, 1859, which was essentially a huge, city-wide riot. (The Congressional election in the district was nevertheless upheld when a Congressional committee delcared that a "man of ordinary courage" could have made it to the polls.)

One of the other changes that the article discusses is that people used to come to the polls with preprinted ballots that had been distributed by parties in advance, which made it easier to vote straight party lines.

Of course, the absentee ballot, which is becoming the dominant form in many parts of the country has made selling one's vote easy again. Fraud is also very much easier.

It took women a while to get into the habit of voting because they were already adequately represented by their fathers, husbands and sons.

This makes me wonder if the decline in male voters at all contributed to women's ability to gain the vote.

I doubt it was lack of personal interest in voting that caused the majority of women to be slow to "get into the habit," so much as it was pressure from their husbands and other male relatives (as well as more diffuse cultural pressure) to stay away from such 'radical' (for women) activities.

Also, I assume that the percentage of women who had adequate literacy skills to follow the details of political campaigns, and who had access to literature on the same, would have been lower than that of men?

Voting is a waste of time in the U.S. I can predict who will win every election, a democrat or a republican. I can also predict no matter who wins, nothing will change. Why waste time, fuel, or intellectual thought on a system that is corrupt. No where in the law does it state that the U.S. is a two party system but your choice is only one of the two parties which are bought and paid for by special interest, corporations, and foreign governments. We have a corrupt and complacent main stream media that will not ask hard questions for fear of losing access so they tow one of the two party lines. To hell with the government. I will never vote again as it make absolutely no sense.

The Historical Precedent for a Legally Contested Election – Liberal.News — September 24, 2020

[…] contested election occurred over 50 years later in 1876. Amidst the fallout of Reconstruction, American voter turnout was exceptionally high. After over a decade of immense claims of both fraud and voter suppression throughout the […]

We manufacture and supply toilet cubicle. Created to last with over 10 years of experience, get a quote for your following project ... tap https://partisi-kamar-mandi.blogspot.com/2019/02/cubicle-toilet-phenolic-blitar-murah.html to go further.

If you should be looking for a company providing quality and cheap towing, you stumbled on the right spot. When stranded in the middle of nowhere or when your car just ... tap https://carcarrier.netlify.app/car-carrier-jakarta-surabaya.html for more offers

Epoxy flooring is generally known to be one of the most resilient and long lasting ... If you are looking for a qualified epoxy flooring contractor in Indonesia... tap https://kontraktorepoxy.netlify.app/jasa-epoxy-lantai-3d-langsa/index.html for more information.

Executive-Education.id will be the ideal remedy for folks throughout alleviating the condition regarding children'vertisements understanding success throughout old schools. By using lessons... click https://privat-inggris.netlify.app/kursus-bahasa-inggris-kalideres.html for further

Jabodetabek private tutoring services with teachers coming to the house. Greater than numerous active tutors you will need to teach various skills and lessons for kids to adults ... go to https://privat-matematika.vercel.app/les-privat-matematika-pulo-gadung.html for further