Claude Fischer, author of Made in America (the blog and the book), recently posted about the trend in IQ test scores among Americans.  He explains:

In general, contemporary Americans – and westerners in general – score higher  than did people in the early- and mid-twentieth century… Indeed, there have been “massive gains” in scores over the twentieth century. This increase has been called the “Flynn Effect” after the scholar who first noted it. 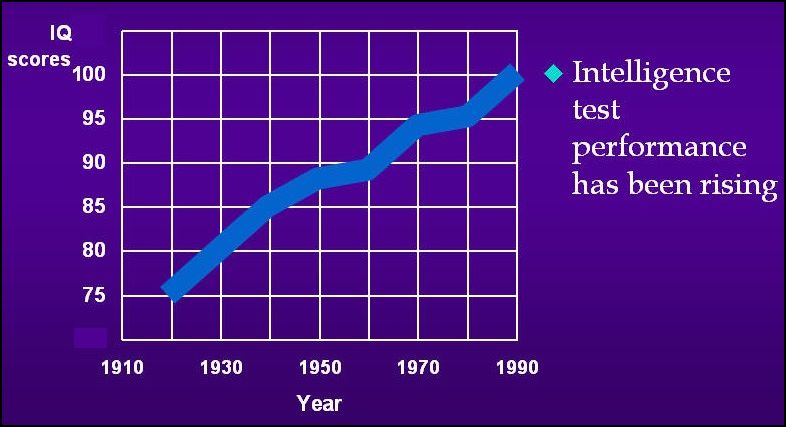 Fischer argues that the rise in intelligence test scores reflects training in abstract cognitive tasks (both in school and out)  and improved health and nutrition:

Over the years, more Americans have become more extensively “trained” – knowingly or not – in the cognitive skills these tests measure, such as reading and decoding visual abstractions. Consider how modern children learn to “get” the alternating perspectives and visual meanings in television, video games, commercial logos, traffic signals, and the like…  And modern children encounter far more writing, from schoolbooks to billboards to Facebook entries, than their ancestors did…

Another sort of explanation stresses improved health and nutrition, particularly in the womb and early in life. Not just sufficient calories, but sufficient nutrients like iodine and Vitamin C, are critical to growing minds (see, e.g., here.) Similarly, exposure to toxins, notably to lead in old paint and gasoline, reduces children’s cognitive skills. Thus, improved nutrition and health over the 20th century could explain some or all of the increase.

The rise in intelligence scores and the influence of our environments, suggests an interactive relationship between biology and society.  We often think that intelligence is somehow “innate,” as if we are born with a certain IQ that is more or less inflexible.  These scores suggest, however, that our potential for abstract thought, though it may be located in the biological matter of the brain, is actually quite malleable.

This, of course, is helpful for understanding differences in cognitive ability by socioeconomic class at one point in time, as well as historical changes.

I just posted this to Facebook with the status "IDIOCRACY IS WRONG." This is exactly why I hate that movie-- because it's wrong, and because everyone seems to believe it.

Um, I could be wrong, but isn't there a drastic change in what kind of questions are asked on these tests as well? I mean, I understand there is still something of a class bias in these tests today, but nothing like it was before. I'd think this would also account for at least some of the increase.

@Basiorana, I would have to disagree with you. Certainly, a portion of the population will have better visual intelligence from watching tv, etc., but the diet of many is actually declining in health, thus voiding (possibly) some of the gain in IQ over the last century. And if people of lower intelligence, lower socioeconomic status, and poorer living/nutritional circumstances reproduce at a faster rate than those of greater means, health, and intelligence, it is possible that we are headed in the general direction Idiocracy predicts, though of course (I hope!) not to that extent. Bless you for being an optimist, and forgive my lack of faith in humanity. :)

The debate concerns the heritability of intelligence, which is not affected by the trend in mean IQ scores. The quantity being measured is the variance of intelligence within a population. Thus, if intelligence is highly heritable a person with a high IQ score will generally have children with a high IQ score (IQ scores are graded on a curve with 100 being the average). That a trait is highly heritable does not mean that it cannot be affected by the environment. Nutrition and education increase everyone's IQ scores, but the relative IQs stay the same to whatever extent IQ is heritable. See the wikipedia article "Heritability of IQ".

I'm a bit confused - I thought IQ scores were normalized and re-normalized over time such that the average is 100. So does anyone know what it truly is that they are plotting in the blue line?

Look up the IQ test on wikipedia or some other source. It was never designed to test intelligence, it was designed for the military to test for mental retardation. People who think it tests intelligence are grossly misinformed. So how do we know how smart someone is? It's complicated, we need to measure them relative to other people in various activities. How do we determine intelligence across all activities? We can't.

The common IQ test only tests your (supposed) skills in the logic department (which you can practize). And that is what we call intelligence? Being good at completing lines of numbers? As a mathematician once pointed out: There is no wrong answer to this question: If the line is "1, 2, 3, 4, 5" you could answer with "1" - because your algorithm is "add 1, do this four times, subtract four, start again". That's a good algorithm, it's a logical algorithm. But will you get points for this answer? Probably not, because the answer *should* be "6".

As far as I know these kind of question do come up a lot in an average IQ test ("Complete this line", "Find the missing number/letter/picture", and so on - at least in the ones I did).

The only thing you can use an IQ test for is making dividing your candidates for a position easier and pic out the one with the highest score - because for whatever reason people like to believe that a high test score means you are better suited for a certain job than the rest of the candidates.

As a sidenote: If nutrition and health also have an effect on your score of an IQ test, doesn't this mean that people with no access to good health care and nutrition will have a lower IQ score - and thus reinforcing the "poor = dumb"-equation?

Examining the ability of subjects to make themselves understood using written English is an alternative way to differentiate intelligence.

visual bombardment by advertising and environmental marketing is how modern children "encounter more writing?" maybe intelligence tests are based upon a consumption model.

The only thing IQ is a measure of is how you scored on an IQ test.