Dmitriy T.M. sent in a link to an interesting breakdown of the race/ethnicity and gender of guests on a number of late-night talk shows, found at Edlundart.

The data for this graphic was gathered over 6 weeks in August and September of 2010. Numbers are based on guest lists as presented on Late Night Lineups. Determining race/ethnicity can be a rather dicey and imprecise activity, and it’s also worth noting that the relationship between census and guest numbers is not a pure one – for example, some of the guests I counted as white are British white people who are visiting the United States.

Of course, a few guests were neither White, Hispanic, Black, nor Asian. These guests were left out, as their numbers were insignificant on the whole…

Edlund also points out that since The Daily Show only has one guest per night, it has a much smaller dataset than the others, so the lack of diversity may be somewhat overstated due to such a small sample.

Here are the results for race (presented as % of all guests); the small dots show the percent in the Census, the wider bars the percent on the show: 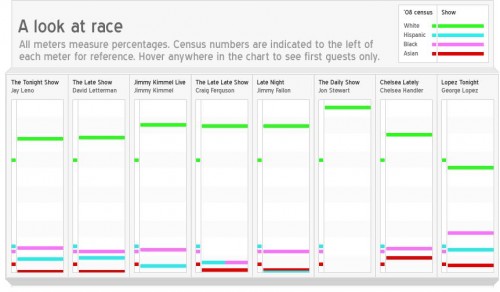 Here is the same data but for the top-billed guests only, where the over-representation of Whites goes up even more for most of the shows: 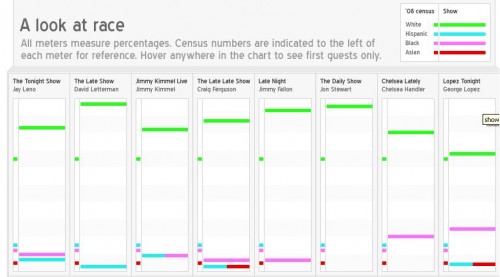 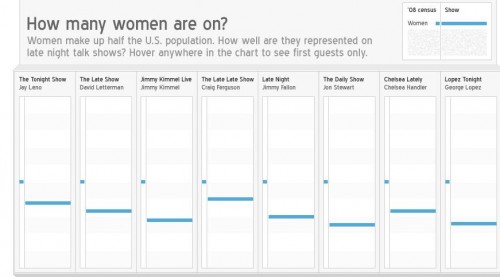 And, again, for just top-billed guests: 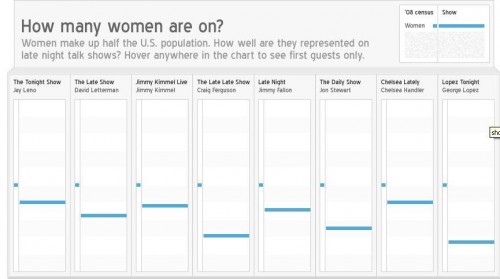 As Edlund says, these data both reflect and reinforce broader cultural patterns. Given that Whites still dominate the political system, for instance, it’s not surprising that political guests would be disproportionately White; and if more movies have male stars than female stars, guest spots will reflect that as well. But at the same time, these shows include people from a range of industries/careers, and their selection of guests helps raise the profile of some individuals more than others, potentially contributing to more opportunities and star power for them. So they don’t just reflect existing realities; they amplify them.

It would be great to get more info on how an individual is selected when there are multiple possibilities — say, you have a movie with several prominent cast members. In that case, are there patterns related to race/ethnicity and gender in which person is most likely to get booked?

Edlund also points out that since The Daily Show only has one guest per night, it has a much smaller dataset than the others, so the lack of diversity may be somewhat overstated due to such a small sample.

Well, it's definitely overstated; I don't think anyone is claiming that the actual guest list on the Daily Show has been 100% white over the years. But the small sample size seems unnecessary here. Is there really not a guest list available somewhere on the internet for the entire run of all of these shows?

I missed that part that explains why this is an OVERrepresentation and why that is a problem.

I really hate sloppy analyses like these, even ignoring the very small sample size. Gwen alludes to this in her commentary, but I can't emphasize it enough.

This is no more relevant than comparing late night TV guests to those on SportsCenter. True, they both deal with ethnicity and gender, but the sample populations are wholly different. The comparison would tell you nothing about the shows themselves - only when you look at the sample populations could you start to make meaningful inferences (ethnicity in sports vs politics, perhaps).

I understand this graphic may not be meant as a fully academic piece, but it is lazy and irresponsible to infer any sort of commentary about "broader cultural patterns" here. The data is simply too inadequate to support it.