Kristie, Dmitriy T.M., and Tiffany L. sent in this post at OkCupid comparing 3.2 million profiles of straight people to those of gays and lesbians. Undermining the persistent stereotype that gays are more sexually promiscuous than straight individuals, OkCupid users, gay and straight, reported the same median number of sex partners (6), and the overall pattern is nearly identical regardless of sexual orientation: 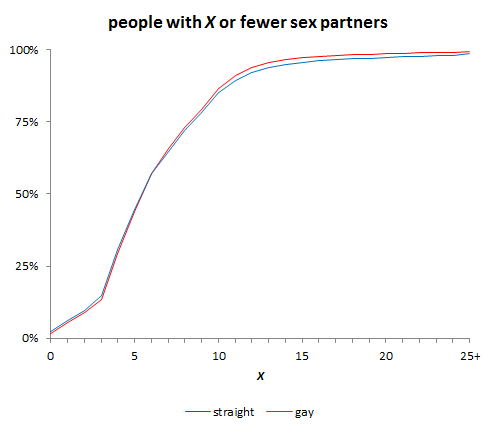 And sexual encounters with someone of the same sex aren’t limited to people who identify as gay. Here are the results from a survey of 252,900 users who identify themselves as straight; about a third have either had at least one same-sex sexual encounter, or would like to: 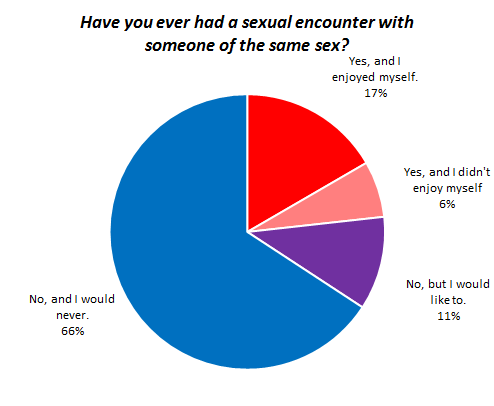 Straight-identified women were significantly more likely to report a same-sex experience (and that it was pleasurable) or interest than were straight men. Here’s the pie chart for women: 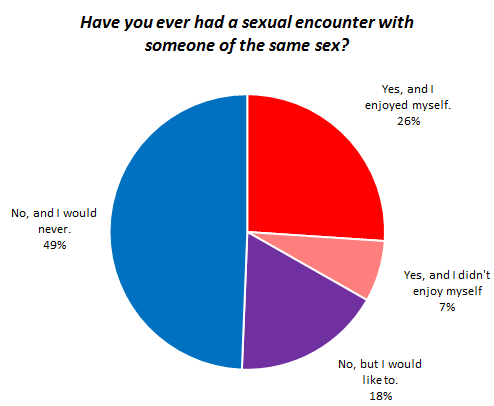 And this is for men: 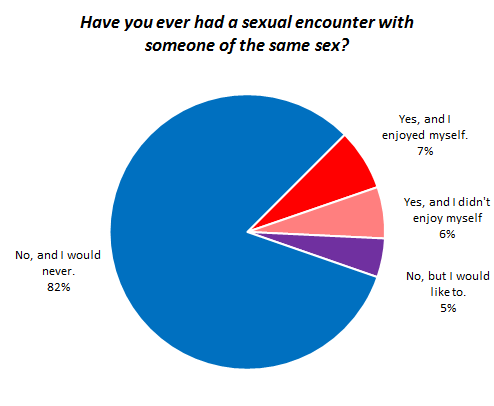 My guess is a lot of people will attribute that to women “playing” at being bisexual or going through a “stage,” but it seems likely to me that part of what is going on is that men’s gender performance is policed so much more harshly and constantly that men suffer greater consequences for same-sex encounters and have more reason to avoid them and to avoid even thinking of them as a possibility.

Reports of same-sex encounters or interest varied significantly by region. In the map, orange = higher rates, blue = lower (OkCupid doesn’t give any percents to go with the different colors, sorry): 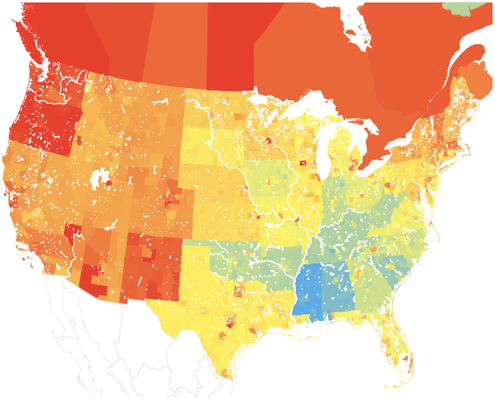 There’s other data on personality profiles and, uh, the number of people who think the earth is larger than the sun (!) at the original post.

Also see our previous post on race, gender, and preferences on OkCupid.

There are a depressing number of comments that say, "your data does not conform to my prejudices, so your data must be wrong." I do wish our education system did a better job of teaching people that everything they think they know could be proven wrong at any moment.

Oregon's nearly uniform color seems wrong. The eastern part of the state is more sparsely populated and more conservative than the western part, and I just can't believe it's accurate.

That map looks really strange to me. Canada is coloured differently for a reason? I can't believe there's no blue in at LEAST Alberta or some parts of BC...

The analysis of same-sex experiences of "straight" men and women ignores the research by Lisa Diamond where she finds that for men, sexual behavior and self-identification are closely linked - men identify clearly based on the gender-preference of their sexual partners. By contrast women are much more fluid about their identification - they can be identified straight, but later identify as gay when with a female partner.

I think the overall assertion of men being policed (or feeling policed) may not be far off - but the implications, given Diamond's data, is a little different from what is stated above - men with inkling for same-sex and opposite-sex encounters likely identify as bisexual, not straight.

That we can see state boundaries on the map but also can see very local information around cities tells us they're doing something very strange to display the data.

My guess is that for areas they have a lot of users (cities) they're giving detailed information, but then for areas they don't they're just coloring the whole state/province by the average for that place? Maybe? It worries me and I don't trust it.

And of course, nothing about bisexual users.

Which is fine, of course, since OKcupid bloggers have already proved that bisexuals don't exist. With science!

This article is interesting, but that biphobia on OKC is a bit much...

Yup, also wondering about the coloring on the map. Why are we able to see the outline of nearly every state? That is statistically wack.

"And sexual encounters with someone of the same sex aren’t limited to people who identify as gay."

That's right...because a lot of people identify as bisexual or some other variety of queer other than "gay" or "lesbian". Didn't they manage to work that into the results somehow?

at first glance, i'm very surprised by western WV as the 2 larger cities do have a significant population... hmmm.. this just seems off.

Let's not forget that we are talking about people that are registered on OKCupid so it's not very likely that it represents the entire population as I am fairly certain OKC tends to have a predominant young membership which in turn would perhaps be more likely to report engaging in this. There is of course also the issue of what exactly we consider to be "a sexual encounter".

Gwen says, "My guess is a lot of people will attribute that to women “playing” at being bisexual or going through a “stage,” but it seems likely to me that part of what is going on is that men’s gender performance is policed so much more harshly and constantly that men suffer greater consequences for same-sex encounters and have more reason to avoid them and to avoid even thinking of them as a possibility."

I agree with her conclusion. When you hear about what goes on in some environments like British boys prep schools, where there is less policing and less stigma to homosexual experimentation for boys, it really makes me think that as things loosen up culturally for men in terms of patriarchal competition, we might see these rates become more equal for men and women.

Of course there are tons of issues with the accuracy, reliability and age groups dealt with in the data but it is interesting nonetheless.

If straight men included circle jerks (or whatever they're called these days) as "sexual encounter with someone of the same sex" the number of straight men who never have and never want to would be considerably lower.

Er, yeah, I don't think that map is approaching accurate. Living in north Louisiana, I can tell you there's not that much difference between here and Mississippi. At the least, Jackson (which is the slightly lighter blue area near the MS-northeast LA border) should probably be more orange/yellow than Louisiana.

...I like how Austin is so well-defined, though. :) I think they got that one right. (Yeah, I know, probably more OKCupid users there, better data and so on.)

A point that a lot of commenters seem to be converging on is how utterly unreliable the source data is--and kudos to Jeff Kaufman for spotting the internal evidence (i.e., the very clear state boundaries).

I really want to see p-values and standard errors, especially for the breakdown of people who think the earth is bigger than the sun. Sure, things look really different on a graph, but are they statistically different?

Canada is a sexy, sexy place.

What about the idea that people tend to grossly over-estimate and under-estimate the amount of sexual partners they've had?

I find it really odd that most of Canada is dark orange and Labrador is GLARINGLY blue.