A secret on PostSecret today nicely captures how women’s magazines are relentlessly guy-centric: 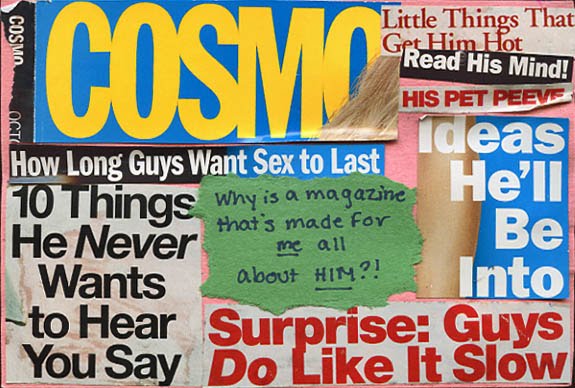 I've actually stopped reading women's magazines for this reason. I grew tired of being told how to please him. Especially since you don't find men's magazines with titles like '10 Ways To Please Her'.

If I may: the problem I see here isn't as much heteronormativity (though this is ample evidence of that) as it is "other-focus." The path to happiness here isn't in finding what makes you happy so much as it is making HIM happy.

These mag's also seem to promote a sort of "us" vs "them" mentality.... a kind of idea that men are a strange and unusual species that can only be understood through reading magazine articles about them. God forbid actually TALKING to them!

Some people actually preformed an exorcism of a cosmo magazine: http://www.youtube.com/watch?v=qYCLC-s2rjA

I understand the "guy-centric" issue... and agree it's not a healthy way to approach life. The "other focus" as Satchel said above. But I'm a bit confused by the headline. What is wrong with a magazine focusing on a heterosexual orientation? Do all magazines have to speak to all segments of the market?

i was raised by a feminist who always told me to learn how to please myself before i expected a man - or woman - to be able to please me. i have never bought these mags as i have always been horribly offended that i should be more concerned about pleasing a man than making sure i knew how to tell him to please ME.

I can't beleive women actually still buy this crap-o "magazine." Not only is it hetero-normative, sexist, and incredibly insulting to everyone's intelligence, it is BORING. They just re-write the same five sex articles every month, throw in some really awful trashy clothes and icky makeup ideas, fill it full of ads for toxic crap nobody needs and "voila!", there's your Cosmo.

The worst thing is that somehow this ends up in my highschool art classroom. All I can say is that I would rather my students cut them up for collage than read them.

It's interesting to look at the differences between magazines directed at women vs men. Men are treated as people with multiple interests that like to do stuff. Women are treated as objects or servants with indifference to their own pleasure.

When I'm trapped in a waiting room without a book, I read the men's magazines instead. The content of those is a lot more varied. There's typically articles about entertainment/leisure, politics/current events, utilitarian product reviews, maybe a little fashion, and a "hot girl" photo spread. Most of the content is leisure or pleasure related. Very little is dedicated to the reader's physical appearance. If advice for impressing women is given, it tends to be something with utility to a man as well (skills or tools, such as cooking or buying a quality frying pan).

Most magazines directed at women are complete tripe. The content can be summarized as, "how to be a better object!" or "how to please men more.!" Magazines not focused on improving physical appearance or entertaining men instead revolve around raising children or domestic tasks. Very little of the content is leisure or pleasure based, it's all about better serving the male gaze, children, or the household.

I'm going to be wildly optimistic for a second (and it pains me to do this, since I would effectively be defending one of the most vapid publications in printing history).

Imagine a wholesome, rounded "women's magazine". It might have articles on politics, ecology, hobbies (e.g. photography), science or history. But none of these things need a female perspective. If I, as a woman, wanted to read about those topics, I would buy Newsweek or New Scientist or National Geographic.

Therefore if you want a "women's magazine", it must be confined to female-specific topics: relationships from a female point of view or fashion from a female point of view. So that's what women's magazines are. They don't assume that you're an idiot who's only interested in men, but that if you wanted to read about politics or anthropology, you'd go to other places for that.

This brings me to the lesbian thing. If we're talking about relationships or sex, the advice cannot be unisex. "Try arousing your partner by rubbing their penis/vagina"? Therefore you would have a magazine with articles targeted at gay, bi, "fluid", trans and heterosexual women - just to encompass everyone. If I spent a certain amount of money on a magazine and only 60% of it was relevant to me, I would consider that a waste of my money and probably not buy the magazine again. That's just business. And "A magazine for the fun, fearless heterosexual female" just doesn't have a good ring to it. That's marketing.

Finally, if you read any men's magazine you'd think all they're interested in are boobs, gadgets and pumping iron. Most men have interests outside of that, but men's magazines take a few select topics that would apply to a vast percentage of their target demographic and run with it.

[...] is considered “moxy” is a problem. It is interpreted as courageous because it is not heteronormative behavior (as dictated by Essentialist philosophy). Women are not supposed to make the first move. [...]

When I pick up a women's magazine this is basically what I get:

It sucks total balls (which, by the way, I'm instructed to do in the '50 ways to please your man' sections even though they don't apply to me)

I am so sick of seeing magazines that only apply to straight girls who take a huge interest in their image for the sake of getting guys. If some girls like to know about the latest makeup/hairstyles/fashion then that is completely fine, however, there are some girls who want to be educated on other subjects AND have support out there if they are not straight. A little bit of diversity couldn't hurt...
Except perhaps the pockets of media corporations who distribute magazines every month believe it will because they're not willing to take the risk. Maybe they should start taking a risk though.