Which Americans Are Republicans Pledging To?

As you may have heard, this week the Republican Party released what they’ve termed a “Pledge to America,” a document that lists their agenda for the next legislative session. Erin Echols, a student at Kennesaw State U., took a look at it and was struck by the contents, particularly the images.

Of the 48 total pages of the document, 14 consist of images, either a single one or a collage of several. Of course, in a document of this sort, you’re going to have the required patriotic images — the Statue of Liberty, Mount Rushmore, the Capitol and other buildings in D.C. Nothing surprising there. But Erin points out that the cowboy seems to be a recurring theme.

It reminded me of a post by Macon D. over at Racialicious a while back about some ads by a Republican primary candidate for Agricultural  Commissioner in Alabama:

The hat, the horse, the rifle, the sweeping music that makes me think of old Western movies… it all evokes what Macon D. calls the “Independent (White) Cowboy Myth,” a version of rugged, stand-alone, honest manhood. Macon D. quotes Mel at BroadSnark:

In this mythology, the cowboy is a white man. He is a crusty frontiersman taming the west and paving the way for civilization. He is the good guy fighting the dangerous Indian. He is free and independent. He is in charge of his own destiny.

Here’s the follow-up ad he made after losing:

And, for the record, I’m not arguing this presentation of Dale Peterson is necessarily fake; for all I know he dresses and acts like that all the time. People do; I’m related to some of them. I’m not saying Peterson is a fraud who really wears tuxes and has never been on a horse. That’s irrelevant. What I’m interested in is the power of a particular cowboy mythology, the one on display in Peterson’s ads.

As Macon D. points out, Ronald Reagan actively appropriated the cowboy persona, often wearing cowboy hats and jeans, sometimes alongside a horse (he had also played cowboys in a couple of movies). He openly identified with the “Sagebrush Rebellion,” an effort by groups in the western U.S. in the ’70s and ’80s to stop designation of federal lands as protected wilderness areas, push for more mining and livestock grazing rights on public land, and oppose some other environmental and land use regulations, depicted as impositions from distant elites.

Macon D. quotes Sarah Watts on the appeal of the White cowboy myth when Theodore Roosevelt first used it:

…he met the psychological desires in their imagination, making them into masters of their own fate, propelling them into violent adventure and comradeship, believing them at home in nature, not in the hothouse interiors of office buildings or middle-class homes.

The cowboy myth, then, arose partly to allay deep anxieties about changes in American society. But the myth is just that — a myth, a romanticized notion largely unmoored from the realities of cowboys’ lives. Mel says,

Cowboys were itinerant workers who, while paid fairly well when they had work, spent much of the year begging for odd jobs.  Many did not even own the horse they rode.  Frequently, they worked for large cattle companies owned by stockholders from the Northeast and Europe, not for small family operations (a la Bonanza).  The few times cowboys tried to organize, they were brutally oppressed by ranchers.

This isn’t true just in the past. I know people who work as hired hands on ranches now. They love many aspects of the life. But most of them aren’t particularly well-paid; they don’t have retirement benefits or health insurance; they aren’t on a path to being able to buy their own ranch and be a self-reliant family farmer. Some become managers, with more responsibility and money, as in any occupation. But sometimes what initially seemed like a great deal — getting free housing as part of the job — turns out to have downsides, such as being expected to be available round-the-clock since you’re right there on the property, or fearing that if you piss off your employer and get fired, you’re out of a place to live immediately as well.

The examples I’ve given here have all been Republicans. Democrats use the cowboy mythology as well — Secretary of the Interior Ken Salazar is well known for often appearing in a cowboy hat and nearly always wearing a bolo tie rather than a necktie. However, Republicans seem to appropriate the cowboy persona more often, or at least more successfully.

Anyway…back to Erin’s analysis of the “Pledge to America.” The other interesting feature of the images is their overwhelming Whiteness. Some examples of group photos: 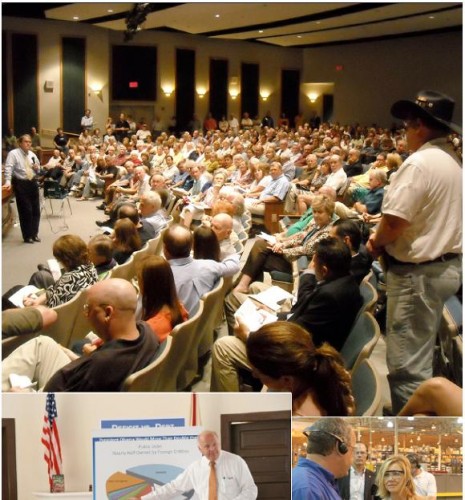 Overall, the photos show a sea of Whiteness. As Erin says, whether it’s an unintentional oversight or a calculated choice, the resulting message is that America’s citizens, the hard-working, patriotic folks who matter and to whom the party is making pledges, are White. Given the current racialized tone of much of our political debate (especially regarding Hispanic immigrants and Muslims, a racialized group often conflated with “Arabs”), it’s a portrait of America that is likely to speak to, and soothe, the fears of some groups more than others.

Never one to hesitate from a Gil Scott-Heron reference, I think this song serves as an excellent follow-up to your post:

I don't think this is the full version, which has some an outro I really like, but which isn't really necessary to the point of the song.

All I'm seeing from those pictures is a sea, or rather, flood of angry white folks...pass

Very interesting analysis. It made me think that Sarah Palin fits into that mode -- she's rather Annie Oakley-esque. The White, don't mess with me, but I'm still sexy, individualist.

When you look for white people you see white people. The second collage has a black woman front and center.

I would have assumed she had been spotted already, but when less obvious diversity was mentioned later in the post, the lack of reference to the black woman in red became strange.

Your short analysis of the cowboy imagry up top sounds an awful like the first few chapters of Evelyn Schlatter's Aryan Cowboys. Have you read it?

Thanks for the post! Sorry if I missed someone of color somewhere, but I think I have to agree with Amadi and Jared.

I didn't look at the pictures intentionally looking for a lack of minorities. I realized it half way through reading the document and then went back multiple times to makes sure my original perceptions were indeed correct.

Is this all you have to say about the "Pledge to America:" that it has too many cowboys? Wow, that's some real investigative reporting. I feel like I know so much about the pledge from your post. Actually, all I know is that you don't like cowboys. You aren't saying anything about the pledge itself. Last time I check out this blog. I think I'll go somewhere where they actually talk about the issues, not make one up and then talk about it for twenty paragraphs.

Looking at the photos, I would say that not only are the Republicans speaking to white Americans, they are also speaking to older Americans.

Unbearable Whiteness of Being | Comments from Left Field — September 26, 2010

[...] A provocative analysis of the Republican Pledge to America. Overall, the photos show a sea of Whiteness. As Erin says, whether it’s an unintentional oversight or a calculated choice, the resulting message is that America’s citizens, the hard-working, patriotic folks who matter and to whom the party is making pledges, are White. Given the current racialized tone of much of our political debate (especially regarding Hispanic immigrants and Muslims, a racialized group often conflated with “Arabs”), it’s a portrait of America that is likely to speak to, and soothe, the fears of some groups more than others. Share and Enjoy: [...]

I'm thinking people who value these images would be appalled to find out what most cowboys actually were--nonwhite migrant workers for big corporations (I think Michael Parenti and Howard Zinn might be people to read for more information about this).

As far as we know, horses, who had evolved on the North American continent, were extinct in North America some ten thousand years before Europeans landed; at a maximum, there was a relict population that was genetically swamped except for a few genes like champagne, silver dapple, snowflake, and some curly traits. In any case, natives had no horseback culture, but they swiftly developed one the parallel of Central Asia when they acquired the Spanish horses. The Western stock saddle derived from the Spanish cavalry saddles, the cowboy lingo is largely Spanglish, and a lot of the buckaroos (vaqueros) were mestizos. The earliest free blacks were often cowboys, because you can't put a slave on a horse, turn him loose on an unfenced range, and expect him to stick around. Nonetheless, the average cowpoke was pretty much at the mercy of the big ranchers, and in some jurisdictions, one who tried to ranch for himself was presumed to be a cattle rustler and strung up accordingly. The Marlborough man is a media creation, but one with all too much hold on mean old white people.

To quote Pat Buchanan: "If demography is destiny, the West is finished."

The changing demographics worry many conservatives, and this attitude is reflected in the party. In my opinion, it will only get uglier from here.

A lot of the Repub rhetoric is code words for fear of non-white people. "Take back our country..." - from whom? - a black man
"We're going the wrong way..." - who is steering? etc.

What I also find interesting about these images is all the white hair. There are no images of children and no adults that appear to be younger than 30; maybe even older for the men.

...And the image of the front porch (with flag) and verdant lawn and flowers, edging a peaceful suburban sidewalk and street.... where NOBODY is playing or walking or even driving. Sorry to get away from the cowboy theme, but the romantic suburbia caught my eye, too.

I had an architecture professor once tell me that his first job out of college was coloring those pastel renderings of track homes and adding all those children holding balloons. It's funny how putting real people in the images changes the pitch.

Thoughtful intelligent observations on the type of America most Republicans would like in power. Older, whiter, more fearful of a perception of the disappearance of the control of a state that has served them well. Glad to see people looking at this overt codification in their texts and images, even arguing about it. Sadly, it is a narrow, empty, selfish vision I gladly do not share.

A powerful movie made by Patricia Wells with music by Brian Routh and the voice and ideas of Michael Parenti. http://vimeo.com/20715539

"Sea of Whiteness?" This is a politically correct statement? Would one, then, say something such as "Sea of Blackness?" I highly doubt it. The message is factually correct, but the tone is blatantly racist, applying a double-standard to race.