This week the U.S. Census Bureau reported that the American poverty rate has reached 14.3%, the highest it has been in 15 years: 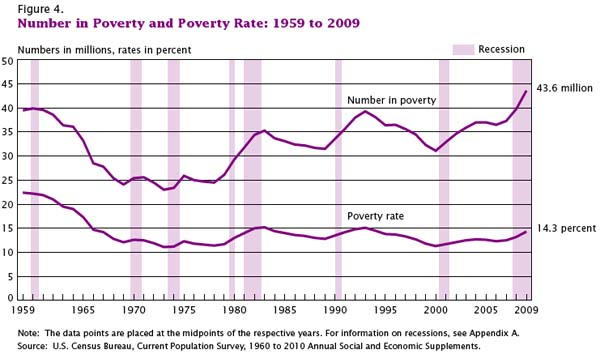 Children are over-represented among the poor; among those  less than 18-years-old, the poverty rate is 20.7%: 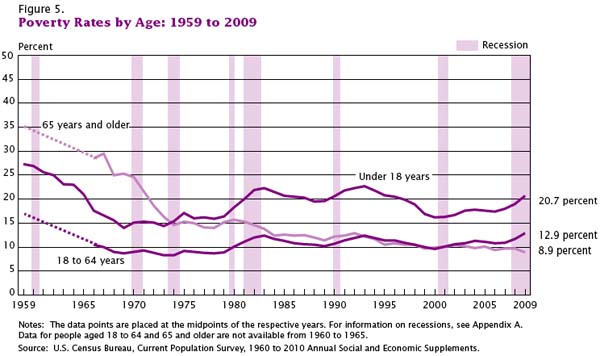 The Census report suggests that the poverty rate would be even higher if it weren’t for an increase in non-nuclear family households.  Over the last two years, an additional 11.6 percent of households now include non-family or family members from three generations or more.  Consider this data from Philip Cohen’s Family Inequality blog (and notice that the near poor are more likely to be living with a grandparent than the poor, who may not have this option): 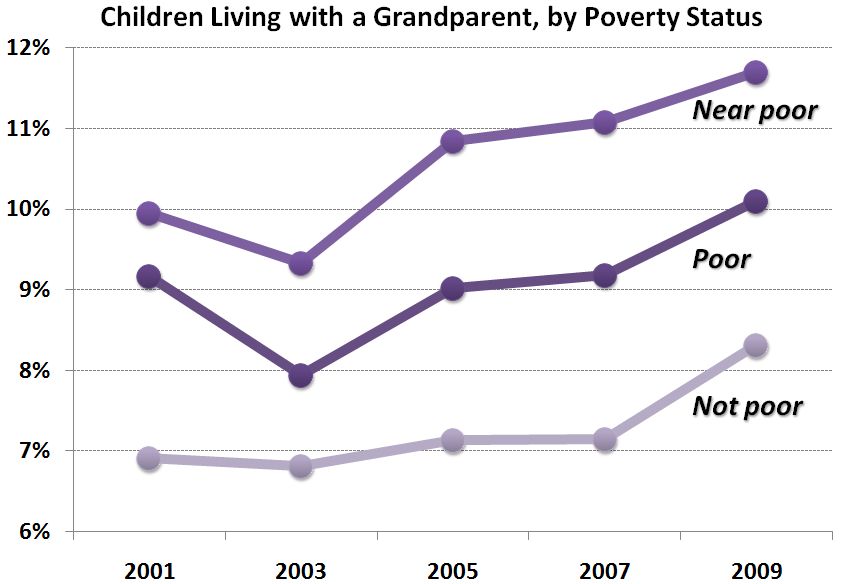 So, the economic recession is correlated with an increase in poverty, but what does “poverty” really mean?   The New York Times reports that in 2009 it meant a pretax income of $10,830 for a single person with no dependents and less than twice that, $22,050, for a family of four.

Trying to imagine keeping a roof over my head, sufficient food in my belly, and clothes on my back on that amount of money is difficult.  But even if this was possible, human beings  need more than food, shelter, and clothes.  Try to imagine, with this amount of money, maintaining friendships and romantic partnerships, nurturing your children’s emotional health and educational potential, having pride and comfort in your home and personal appearance, finding the resources to invest in your own human capital, or giving yourself a modicum of leisure.  Poor people are human too and these numbers only begin to scratch the surface of the kind of deprivation many Americans suffer every day.

I cared for a family of four for several years on about 22/23k a year. It sucked. The only way I did it is by having no debts and living in a low COL area.

Of course, I use the past tense, because at the moment, I've lost my job and haven't been able to find a new one. We moved in with a friend, and are living off of the couple hundred dollars here and there that I'm getting on freelance work and whatever I can find/make to sell.

So I think I can imagine pretty well what it's like to try to maintain friendships and romantic partnerships, and nurture my children on that amount of money. It's hard. And if I had debts, or if I didn't have a wonderful spouse that's on my team- I don't know how I could do it at all.

Interesting that the rate for 65 years and older is so low - I wonder how it would look broken down by sex? Because I know that for a long time, elderly women (mostly widows) had one of the highest poverty rates in the country.

If the figures are accurate, then we're not seeing much correlation between recessions and poverty.

Also, the 'poor aged widow' so beloved of anti-tax protesters in California seems to be a vanishing species.

The big change in poverty rates was between 1959 and 1970: what were the causes of that decline and why did the decline bottom out at about 12%?

I'm not sure I understand how being poor makes it impossible or even more difficult to "maintain[...] friendships and romantic partnerships." Since when do friends and partners cost money?

Most people sell their time to get the money to live. If your time doesn't bring very much money, you have to sell more of it, which leaves less time for relationships.

If no one will buy your time at all, you spend a lot more time scrambling to survive without money. Charity and public assistance require a lot of time spent waiting in lines, and you have to go to their places on their schedules, even if it means hours of walking because you have no car. You don't get all you need in one place, or much at one time, either, so you can't bundle your travel in any sensible way. With no stable place of residence, you lose touch with your friends. Many people's social lives revolve around work and the things they do with their coworkers, and they lose those people when they lose their job. When you can't afford transportation you don't see your lover. If you are homeless you may lose your children; they either end up in state custody or they are handed over to whatever relative/friend can feed and house them.

People tend to have friendships with people of similar economic means. When all your friends are poor, they labor under the same difficulties you do, so you see them less.

People are also judgmental about poverty - they are cautious with friends who are too needy, especially if their own situation is precarious; demands from poor friends can drag them down. Some people don't want their friends to see them as that needy person, so they hide from their friends when things get tough.

Children are like lovers who will never get a job, who interfere with your job, and who you can't break up with. With no money, the affection can become the entertainment, but contraceptives are expensive. Relationships can founder on this one.

So yeah, poverty does mess with your friendships and romantic partnerships.

I am part of a family of six, and we have an income of around $25k a year. I find your assumptions that I cannot maintain relationships, nurture my children, and "maintain pride in my appearance" insulting, and they say more about your privilege than they do about poverty.
If I had any more income, I would donate it to the truly poor. We own a house and a (18 year old) car, have heat and electricity, clothes and good home-cooked food, fast internet and the occasional pizza; I've known real poverty and am keenly aware that I am now very fortunate. Not everyone's human dignity and decency is as dependent on income as yours apparently is.

This is bizarre that one could look at those numbers, and then type away here as though it was very unlikely that a poor person might ever see this. "Try to imagine..."

I haven't made a yearly amount over the poverty level in long time, but then I've spent years living in communal houses, don't have any kids, don't have a car (no car payment, insurance, or gas expense), never had any credit cards, and never took out student loans. Somehow I managed to build myself a successful small business that's supporting me...guess I'm pretty lucky.

I'm a grad student and my husband is an adjunct college instructor - our income is just about at poverty level. I don't know what to tell you: we're eligible for food stamps and medicaid, and our income is enough to pay for housing, utilities, phone, gas & the necessary clothes, toiletries, and cleaning products. In fact, there's even a bit left over after all that. I'm not sure what you're buying with your disposable income that improves your relationships so much, but we're quite happy with ours.

As a member of a family that the government would consider in poverty [5 of us survived on $10,800 last year, with food stamps] I just want to say that I don't feel severely disadvantaged. I am able to go to places with internet access, I have enough clothing and food to subsist on, and we as a family are quite happy and well-off. I cannot say that we're the typical picture of poverty, but I like to imagine that others in our situation are doing just as well.

Realistically, there are things we are deprived of. But I don't tend to think in terms of what I'm lacking -- I think of all the things I have, and the family I have it with.

This is kind of a cheesy and perhaps overly optimistic sounding comment, but I thought I'd offer it anyway as someone who can relate . . . to some extent anyway.

[…] to rise out of their own class has declined. Social stagnation is increasingly the norm, with poverty rates the highest in 15 years, real wage gains worse even than during the decade of the Great Depression, […]