Gender and the Active/Passive Binary in Lego City

Carol C. sent in another example of the male = active, female = passive dichotomy, this time from Lego. They have a line called Lego City, which contains four figures and various accessories: 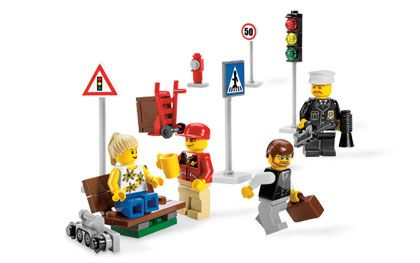 While you can obviously pose the characters however you want, Lego’s description of the set clearly assumes men are in more active, with specific work-related roles:

Meet the residents of LEGO® City!

LEGO® City is one busy place! As the girl listens to the radio on the park bench, the nearby policeman directs cars at the traffic light, the delivery boy hurries with an important package on his cart, and the businessman heads to his next meeting. Includes minifigures, street signs, accessories and more!

The men have jobs and things they are going to do. The girl — the only one here not in a uniform — sits on a bench.

Though she’s listening to the radio (on a boombox from, like, 1989), and possibly being hit on by the delivery boy, so maybe those are supposed to count as being active.

"and possibly being hit on by the delivery boy"

aw i think she's an anti-capitalist who has found alternative means of employment in order to expand her leisure hours and enjoy her life. she is a woman who knows you should be more than your job. yea grrrrrl!

It also continues in the tradition of portraying a world where women are in the minority. As with most children's media that is either aimed at boys or both boys and girls, the world is apparently 3/4 male.

Nooooooo! Please give me my old, gender-neutral lego back. (Sobbing)

OH GOD STOP THE PRESSES, PEOPLE STILL MAINTAIN THE SAME STEREOTYPES THEY WERE BROUGHT UP WITH. WHY CAN'T CULTURE JUST CHANGE ON A DIME. EVERYTHING IS AWFUL FOREVER!

I am so sick and tired of Lego's appalling gender stereotyping. My sons have many sets from the Lego City range and there hasn't been a single female figure in any of them. Apparently the female figures are mostly found in the sets specifically marketed towards girls from the Bellville range where you can get the Sunshine Home complete with Mum, Dad, a baby and a bottle. Groan.

Have a look at this page of all the available lego collections: http://shop.lego.com/ByTheme/ and you'd be forgiven for thinking that it's only the boy children of the world that enjoy snapping bits of plastic together.

And they had to specify the gender of the men. PoliceMAN, delivery BOY, businessMAN. Can't risk someone thinking that the police officer was a butch female mini-fig that happened to have a mustache.

Well, you could take her apart and put her in the police uniform if you wanted, I guess. That is a plus, she can wear whatever she wants and isn't stuck being a lump on a bench.

I went to a large Lego convention last year, and there were forums specifically for women fans of Lego. And it was beyond "something to do while your significant other plays with plastic bricks." This very sort of thing was discussed. Nobody really likes the gendered stuff, not the guys or ladies. Though Lego likes to keep it's grown-up fans happy, I don't see it going away any time soon, unfortunately. The convention was also only about 20% female, I'd bet, if that says anything.

I'm not sure how many sets are designed for Americans specifically, since a lot of the sets are released in Europe as well (sometimes first?) Not that I guess it makes much difference?

What ever happed to the days when we made cities and cars out of regular bricks, never mind the people have to inhabit them? I love legos, weather I'm building houses or robots or cities or cars.

hey, the "girl" is just stated by her gender, but the three males have no common masculinity. They are defined by their occupations.

On the upside Lego heads are interchangeable... so I can make the police officer, the courier or the business executive female. And make the lazy sod on the bench a boy instead.

I got the Lego
duplo pack of people of the world for my 2 yr old son because we seemed to be collecting an awful lot of white males in uniforms of one sort or another with our sets. It was 50/50 girls and women to boys and men and a variety of different ethnic backgrounds were represented. None of the women however had hardhats (unfortunately you can't change hats/heads with lego duplo) and I had long discussions with my son, with me telling him that women can drive cranes, work on construction sites etc. and with him countering "no they can't because they don't have hardhats". He would insist that every truck we saw on the road was driven by a man, when there was no way of telling and even when we could obviously see a woman driving. So I suggested that perhaps some of his characters were engineers or architects drawing up the plans. Pilots could also get away with not wearing a uniform or hard hat, so we had women pilots - hooray! He seems to have relaxed a little and women and penguins(!) are now able to operate cranes- but not kids. Interestingly he often gives the characters names of friends and family who are clearly not of the same ethnicity yet he almost always seems to match the gender of the real person to the gender of the character correctly.

This might be a thing where the normal civilians have the old-fashioned gender roles seen here, but I think it's fairly progressive for the fantasy sets. I recall a fair number of female heroes and bad guys with active roles. I could be misremembering from my own play with assimilated Legos, though. All it takes to make a character female is a ponytail, and you could put that on any head and body.

Well, my son has several pieces from the Agents 2.0 set and there ARE a few female security agent figures. I have a daughter who loves putting Legos together. She wishes there were sets that weren't so aggressively masculine, but it doesn't stop her from building Space Police sets right along with her brother. It's true that Lego doesn't provide many gender neutral playsets ... but they've been doing it so long, I've always chalked it up to clearly knowing their audience. It's all about money and market research, and the fact that more boys than girls play with Legos.

Is that the Group W bench?

"She wishes there were sets that weren’t so aggressively masculine, but it doesn’t stop her from building Space Police sets right along with her brother."

And there you get the picture. What's aggressively masculine? Laser weapons, warships, etc? You get the stereotypes you ask for. The day girls will buy space or medieval sets en masse, lego will add more female minifigures. It won't happen though, because despite your denial, boys and girls are attracted by different things. Sexually, emotionally, socially...
Marketing gives you what you're going to buy, not what you demand. And there's a time you have to stop whining about the gender of lego and ask yourself why girls are exctatic when it comes to ponies while boys don't care. If you want to sell a pony, you'll put it in front of a girl's eyes. If you want to sell to a girl, you put a pony inside. That is, with an exageration, how it works. If you have money to spend with no expected return, you can sell swords to girls and ribbons to boys, but you'll have a tiny customer base. Lego can't work like that.