Way back in June, Eszter H., Eric B., and Kasia G. sent in an image that the Chicago Tribune ran, in early June, of Philadelphia Flyers hockey player Chris Pronger wearing a figure-skating skirt with a sparkly hem, referring to him as “Chrissy” and including the line “Looks like Tarzan, skates like Jane” (image from USA Today): 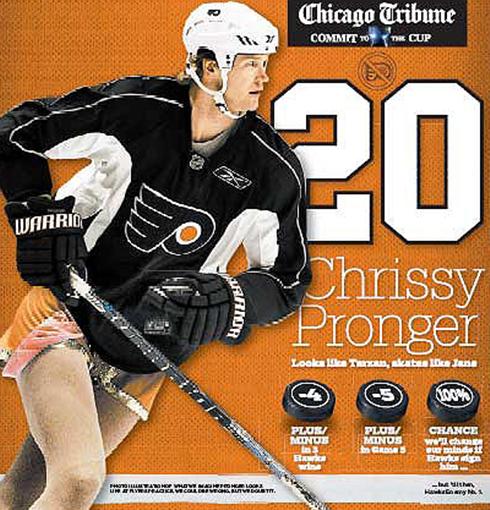 The Tribune was counting on the fact that femininity is stigmatized for men; thus, they don’t have to say anything meaningful about Pronger or make a specific claim. Just linking him to femininity — through clothing, name, and language — is enough to make fun of him. Of course, this isn’t just about mocking Pronger. By default, using femininity to ridicule men involves devaluing women and things associated with us. Someone who “skates like Jane” — that is, like a girl — is laughable.

Angela Ruggiero, head of the U.S. women’s hockey team, clearly understood the connection and didn’t appreciate it (from ESPN):

“I’d like to see that editor out on skates. I’ll take them one-on-one on the ice any day,” three-time Olympic medalist Angela Ruggiero told The Associated Press. “They obviously have never seen women’s hockey and are living in the dark ages.”

Ruggiero found out about the poster via Twitter and expressed disappointment and anger that such demeaning portrayals of women and hockey are still being made.

It’s a great example of the use of femininity as stigma, a process that harms both men (who have to eschew anything associated with women) and women (who are encouraged to perform a devalued and often ridiculed gender ideal).

As a female hockey fan and player, I was highly unamused. Especially in a sport where, like many, the players, the coaches, the trainers, the equipment managers, the front office staff, the newspaper reporters, the officials etc etc etc: men men men men men. And widely unrecognized women's hockey is the same: men everywhere except on the ice. (a few more women doing the other things, but not many)

Regardless, yet another reason Angela Ruggiero is one of my personal heroes. <3

The thing is, many of the traits traditionally associated with femininity (notice I said traditionally associated with ... I'm not saying they really reflect reality or that they're ideal) probably aren't very helpful out on the ice. Physical strength and size is pretty important as is aggression and willingness to make hard contact. Notice his gloves are Warrior brand. For better or for worse, those traits are associated with masculinity and they're a prerequisite for success in hockey. So I don't think this is ad is really saying "Haha, you suck cause you're feminine and women are weak!" ... more like "You suck because you don't have the required courage and aggression to take on your competitors and win!"

@Doogie - and in turn, it implies that women lack courage and aggression and drive to win as well. Which is a problem.

It all goes back to male/female dichotomy

Good for Ruggiero for speaking up.

I always feel like this sort of insult through feminizing has a strain of homophobia to it, too. A potential subtext of the Chrissy Pronger insult is that he's gay.

Incidentally, I didn't know that Tarzan was considered a great skater...

As a hockey player and fan, I see this all the time, unfortunately. Fans like to feminize the names players they don't like: Chrissy Pronger, Cindy Crosby, Danielle Briere, etc. During the Stanley Cup Finals, a camera caught a hilarious and original dig Chris Pronger: someone had written "is gay" next to his name on a whiteboard in the Chicago dressing room. The Blackhawks did, at least, take the Stanley Cup to Chicago's Gay Pride Parade.

This is a problem in hockey fandom made even more complex by the international nature of the sport: French Canadian players are often stereotyped as being more "finesse" and less "gritty" than their Anglophone countrymen; likewise, European players are often branded with the stigma of "soft" (finesse, and therefore effeminate) play. A skilled player is seen as being less manly than a player whose game involves hitting/scrapping/fighting, and manliness, of course, is everything. Overcompensation, perhaps, for wearing stockings, a girdle, and a garter belt ;) (although nowadays those pieces of equipment are simply known as socks and pants; the garter has been replaced by shorts with velcro on them that hold up the socks).

It's so funny, because I (who have pretty much zero knowledge of hockey, hockey teams, or hockey players) saw the picture first before reading Gwen's discussion of it, and thought this was an ad lauding Chris Pronger for his fans. "Looks like Tarzan, skates like Jane" combined with the picture seemed more like a compliment than an insult to me: His skating is fast and strong and extremely precise like a figure skater, and he's also buff and aggressive. I wouldn't want to face that person on the ice. After this initial perception, I was confused for a moment when I learned it was supposed to be an insult directed at a member of a rival team. Then I realized, Of course. Figure skaters, especially female ones, are weak and passive. How could I forget?/sarcasm

Not sure what to make of this, just thought I would share. I guess it felt to me like a reminder of how shaky these gender stereotypes are; advertisers have to be really in-your-face about them to make SURE you haven't forgotten that female athletes aren't like REAL athletes. And still some people, especially outside the intended demographic like me, might not get it, they have to be re-taught or reminded of the stereotypes. It made it clear to me that these stereotypes are not just drifting through our culture without a source, they are being ACTIVELY spread and strengthened.

You should also look into rules for Women's Hockey (which I think may have contributed something here). It's considered a penalty to check another player, whereas in Men's hockey, it's an essential part of the game. I can only assume it's because women are too "fragile" to hit each other into the boards. It's ridiculous. I'm a big hockey fan, and it made me quite angry while watching the Olympics this year.

I think the issue with "shaming" men if they show any sign of emotion, finesse, empathy, relational skills, delicacy, even precision, is that when they want to get into relationships with women and, especially if they have children someday, especially daughters, they are at an extreme disadvantage because successful marriages and parenting do not involve aggression and a drive to win; they require empathy, communication skills, ability to respond to others needs. Even good sex requires this, much less being a good dad.

I think it's best not to call these "feminine" or "masculine" traits but instead human being traits that we all, male and female, alike use in different contexts.

Women can be aggressive and have a drive to win in competitive environments where that is helpful and expected. And men can have empathy, emotional availability, communication skills, ability to respond to others needs when they are with their families or their friends or otherwise in non-competitive contexts. These things don't need to be hard-baked.

Um, how about the implied insult to the amazing athletes that are figure skaters? As a former figure skater I can say that most of us wearing the sequins could out-skate and out-manouvre almost any hockey player. So on one level, if he "skates like Jane", maybe that's a good thing.

I am really sick and tired of figure skating being seen as a "girly" sport or a sport for gay men. Anyone who has ever tried it can tell you it's goddamn hard and totally physically grueling. And there's no padding for when you fall and have a little "boo boo" (which is often...those hockey players wear so much gear they can't feel a fall at all).

This whole thing is just a fine example of how amazingly immature and biggoted sport commentary can be (which is why I seldom read it).

Jayne Torvill is of course a famous figure skater... This point made more sense before I discovered she doesn't spell it "Jane"

Huh. If you'd just told me the phrase 'looks like Tarzan , skates like jane' I would have assumed it was a compliment.

To me 'Tarzan' seems to have associations of hulking brutishness - I would'nt expect great flexibility and manoeuvrability. (Arguably though, I shouldn't think this - I guess tarzan was pretty acrobatic in the treetops)

'Skates like Jane' immediately made me think of Jayne Torvill - an olympic gold medal winning athlete.

So this guys got the strength and the bulk to take you on, but man can he skate circles around you! weren't expecting that from looking at him were you?

i think its important to bring up the fact that in the corner it says "100% chance we will change our mind if the hawks sign him". So basically the chicago tribune is saying that as long as you are our opponent we will insult your masculinity and call you a womman. But if you are on our team you will no longer be insulted

this reminds me of a print ad campaign by our local CFL (football) team several years ago. they had different "women's" products (potpourri, body glitter, and, most infuriatingly, tampons) branded with rival team's logos, capitalizing on the same values and associations this one is.

needless to say, these ads made me see red.

i found the ones for body glitter and potpourri (pasted below) but i can't for the life of me find the ad involving tampons.

they also did one with adult diapers. so they're ageist and ableist, as well as sexist. well done.

[...] Mocking Men with Femininity. A short article about a doctored photo recently printed in the Chicago Tribune that showed a hockey player wearing a skirt. I cannot understand why it is still socially acceptable to infer that anything feminine is shameful or to reinforce the idea that the worst thing a man could ever be accused of is acting like a woman. [...]

[...] Women can act like men because masculinity is culturally ideal. Men cannot act like women without being accused of debasing themselves. Why would acting feminine be debasing? Be disempowering? This is the crux of the [...]