Rich and Richer, Dumb and Dumber

The Center on Budget and Policy Priorities ran the CBO data on income and published a report showing the huge increase in inequality since 1979, especially in recent years (the data go up to 2007 – full report here).  It’s the people at the top – the default swappers and hedge funders – who’ve been making out like bandits, while the rest of us limped slowly along. 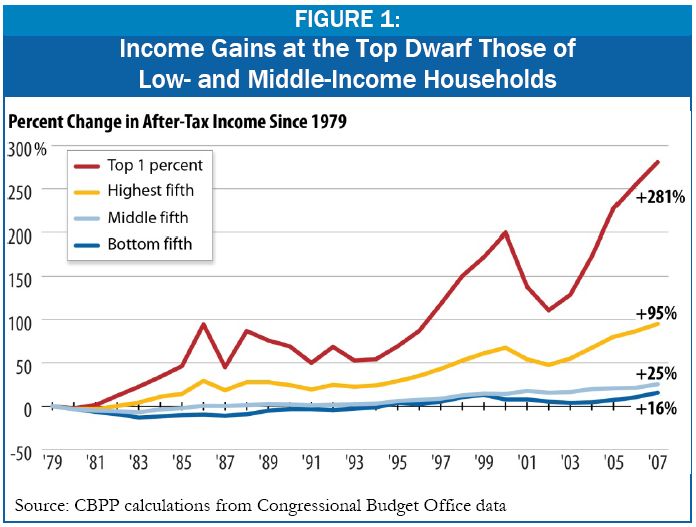 The graph shows percent changes. How much is that in American money?

But here we have Glenn Reynolds, Instapundit, one of the most widely read bloggers in the known universe (especially the conservative universe), reprinting the comment of a reader at a tax blog that posted the data.

People who get an education, stay off of drugs, apply themselves, and save and wisely invest their earnings do a lot better than people who drop out of school, become substance abusers, and buy fancy cars and houses that they can’t afford, only to lose them.

We don’t have an income gap. We have a stupid gap. 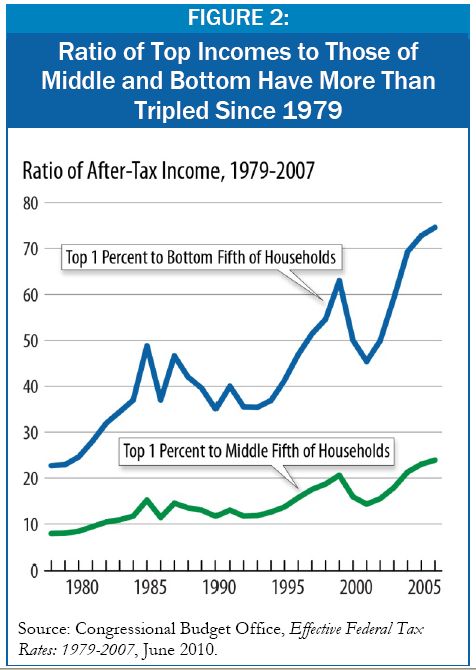 The funny thing is that for a few years (1984- 1983 1993) the rich-poor gap was decreasing. It must have been all the cocaine those bond traders were doing.

The commenter is right – there may be a stupid gap. But it’s the gap that Durkheim suggested long ago. Some people look at “social facts” – large differences between one time or place and another – and try to explain them in terms of individual facts. Other people seek an explanation in social facts – facts about the society, facts which individuals have little power to change.

Using the IQ scale, no one is 36 times smarter than someone else deemed legally competent. Human intelligence just doesn't vary that much.

The one I've heard recently was how "this generation" wasn't going to produce a Bill Gates "because they aren't that entrepreneurial and willing to fail." When I pointed out that Bill Gates had gone to a ridiculously expensive and exclusive private school and then was bankrolled by his rich parents and grandfather they seemed rather taken aback. "I heard he was just a smart guy in his garage!"

Now, that the rich have specifically crafted a monetary system that rewards being rich and punishes being poor might be a sign of specific intelligence, but it's the "evil archvillain" kind and not the Leonardo Di Vinci kind.

How exactly to they account for the exponential increase in degree attainment? This argument makes no sense.

The Mathew Effect seems like a pretty legitimate explanation for this instead of intelligence. There can be some average or unintelligent people who made it rich because they were at the right place at the right time. The thing is, you only need to get wealthy once, and you are able to keep it. The Mathew Effect explains that the wealthy can use their vast resources to gain more wealth, while the poorer have far less leverage.

it seems to me that to some extent the comment could be applied, but with widely different definition of the terms. It seems to me that the huge growing gap in wealth is indeed somehow caused by the capacity (of at least some) of the top group .. but not as much intelligence as much as the network and knowledge of the power structures and customs that allow them (with the money, of course) in the political and economical structures that create that distribution of money and change them in their favour : bearing for less governement regulation and taxes, changing the discourses on merit, etc. It's a lot of material ressource but it's also a all lot of knowing how to use it - and they're born into this game.

It looks like the rich people spontaneously got lots smarter during the early 2000's. Or maybe some other mysterious event happened that caused the stratospheric hike in their wealth? Wonder what it was? It couldn't have happened on January 20, 2001, could it?

Who do these people think they are by suggesting that all people who are poor are idiots and on drugs. Go suck a fat one.