Are Americans More Patriotic than Citizens of Other Countries?

Claude Fischer at Made in America offered some data speaking to the idea that Americans are especially patriotic. That they, in other words, are more likely than citizens of other nations to think that “We’re Number One!”

…involves survey research institutions in dozens of countries asking representative samples of their populations the same questions. A couple of times the ISSP has had its members ask questions designed to tap respondents’ pride in their countries… One set of questions asked respondents how much they agreed or disagreed with five statements such as “I would rather be a citizen of [my country] than of any other country in the world” and “Generally, speaking [my country] is a better country than most other countries.”

Smith put responses on a scale from 5 to 25, with 25 being the most patriotic.  Here are the results from some of the affluent, western democracies (on a shortened scale of 5 to 20): 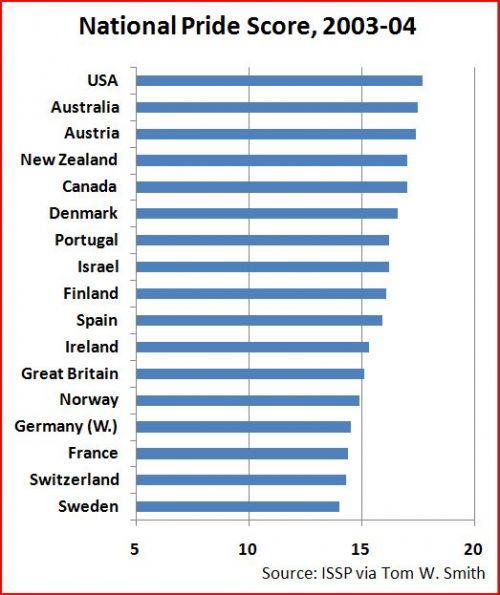 (In any case, what struck me wasn’t the fact that the U.S. is so patriotic, but that many other of these countries were very patriotic as well!   The U.S. is certainly no outlier among this group.  In fact, it looks like all of these countries fall between 14 and 18 on this 20-point scale.  Statistically significant, perhaps, but how meaningful of a difference is it?)

Fischer goes on to ask what’s good and bad about pride and closes with the following concern for U.S. Americans:

We believe that we are #1 almost across the board, when in fact we are far below number one in many arenas – in health, K-12 education, working conditions, to mention just a few. Does our #1 pride then blind us to the possibility that we could learn a thing or two from other countries?

Yes, that's fishy: Have they noticed that in 1989 the wall came down? There is only one Germany since reunification.

I also can't believe the French are supposed to be that little patriotic, even less than us Germans. Can't be true.

There seems to be a conflation of nationalism and patriotism here that I don't think is necessarily the case. For example, I think one can believe one's country is not necessarily better than other countries and still be "patriotic." Patriotism could be expressed, for example, in the desire to better the quality of life in one's country.

Yeah - I was going to say not nationalism but maybe even jingoism. "We're #1" does not equate with patriotism in any meaningful way at all.

As a Canadian, I would say that Canadian patriotism (however falsely) is actually the Canadian belief that we are less patriotic than other countries - particularly the USA - and that therefore we are more rational and peaceful as a result. So it's a kind of irony in that Canadians are patriotic about NOT being number 1 (and subsequently believing that not being number 1 makes us "nicer" than Americans) and about believing that we are not actually patriotic - compared to our perception of Americans and their obsession with the flag and national anthem and pledge of allegiance, etc. Canadians operate under the belief that we are a friendly, peacekeeping, laid back, polite, multi-cultural and tolerant nation of people (and all of which are compared to their negative poles in the US), and that the rest of the world prefers us to Americans (obviously this narrative is problematic in numerous ways.) In other words, I would imagine many Canadians would be happy to see we came out as less patriotic than the US in this survey, which, ironically, would be a source of patriotism in our belief that Canadians are therefore better people.

There's no edit, so I'll sum all that up as a typical Canadian response would be "I'm so glad I'm Canadian so that I'm not expected to be embarrassingly patriotic like Americans." When you think about it, this is hilarious.

The concept of "national pride" is a rather oblique way of measuring patriotism. The idea that Canadians are less patriotic than Americans is not indicated by the data, if indeed national pride is taken as an indicator. When I think of patriotism I do not think of "false pride." Instead, the most patriotic people are those who are willing to "put their money where their mouths are." Many Americans talk a good line about supporting the troops but the Veterans Administration could use a lot of improvement, especially when it comes to hospital care for returning soliders, sailors, marines, etc. That is especially true for women who have served in the military in Iraq or Afghanistan. I think Canadians were very patriotic in World War I. It was WWI and WWII that gave the term "Canadian" added depth of meaning. I believe Canadian passports were not issued on a regular basis until after 1945r, or perhaps later. (Before that they were British U.K. passports.)

Where is the data from Asia, Africa, and Latin America?

Yes, Americans could definitely stand to be less nationalistic and learn that we're not the best in a lot of areas. I get so cranky hearing about how we're the best nation on Earth when a lot of countries are doing better than us on so many measures. I lived in New Zealand as a kid so I've always had this perspective that America seems to force "patriotism" on its citizens in the form of Pledge of Alleigance etc.

[…] conflict or potential conflict.” The report shows 25 such deployments since 2009. Polls find that Americans are generally very patriotic (second only to citizens of […]

10 Unavoidable Arguments Against Patriotism | Acquaintanceship.tk — May 12, 2014

[…] dispute or intensity conflict.” The news shows 25 such deployments given 2009. Polls find that Americans are generally really patriotic (second usually to adults of […]