Between Astroturf and Grass: Movements in the Middle

We recently introduced the idea of “astroturfing.” Coined to contrast with the idea of a “grassroots” movement (led and supported by “regular” people), an astroturf movement is one that looks like it’s grassroots, but is actually driven and funded by a corporation. But is it always easy to distinguish between astroturf and grass? F.T. Garcia sent in this confounding example.

The Wall Street Journal reports that some labor unions are hiring non-union workers to “staff” picket lines, usually at or near minimum wage.  In this picture, for example, employees-for-the-day protest on behalf of union workers for a union they do not belong to: 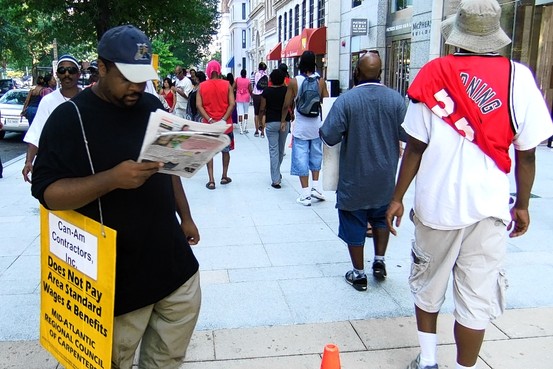 It turns out, protesting is costly.  Workers have to take time off of work, travel to the location of the protest, pay for parking, make sure someone is taking care of their kids, etc.  Plus it’s often hot and involves a lot of yelling and stomping. Accordingly, some unions decide that it’s easier and cheaper to hire protesters than it is to mobilize their own workers.

So, you tell me, astroturf or grassroots?

100% astroturf. It can't be called grassroots if the protestors are being paid. In fact, that hardly even qualifies as a protest; it's more like a commercial. And many unions are just as massive and powerful as the industries they represent, so a union-headed protest is very institutional and non at all true "grassroots" organizing. It's carefully orchestrated with all the power and lawyers and PR reps that bi companies have.

I don't even see why you're questioning it.

I don't think the question even applies. Nobody claims that unions aren't organized, so they're not claiming to be grassroots in the first place.

I lost all respect for the local carpenter's union when they started hiring picketers and not giving them benefits. If unions are gong to hire people, they need to at least give them the same benefits they demand for their own members.

On the other hand, the grad student union did start as a grassroots movement, and most of the activity they engage in is grassroots (coming from the many members, not a small number of leaders).

I don’t think the question even applies. Nobody claims that unions aren’t organized, so they’re not claiming to be grassroots in the first place.

Can't say that it's a very attractive practice, though--I speak as a union member who has been on strike (and striking is very boring, mostly.)

First off, it seems like people should get paid the local living wage if they're hired pickets--isn't the living wage a major union issue?

Second, the legitimacy of pickets seems to rest on the idea that union members are picketing, or else that union allies who personally care about the issue are (and usually allies carry signs that say "Students support the strike!" or "Doctors for nurses' unions" or whatever). Surely if the union is going to hire random people then the company should just hire other random people to counter-picket with signs that say "unions are stupid"? And then it's just an arms race. A picket isn't just advertising; it's intended very specifically to put faces on the campaign. If the union wants to spend money on the strike, it would be better to spend money on media, since mainstream media is almost always ridiculously misinformed and/or mendacious about strikes. (They certainly were full of lies about ours.)

Agree with DonBoy. Grassroots isn't the only kind of legitimate protest - if unions weren't paying people, they wouldn't be grassroots, but they would be legitimate organized protest.

I also think there's a major difference between unions paying people to protest and big, powerful political coalitions or other powerful groups doing so - it's not better, but there is a difference in context. I'd like to look into the economic/political climate that drives unions to do this.

I walk by those exact protests all the time. I'm kind of disappointed to learn that the protesters aren't really carpenters. Also I'm confused as to what they're trying to accomplish. That street in the photo is right near K street and within probably a one mile radius of the White House. Who are they trying to reach? Sympathetic office workers and baristas? It's not like the companies they're protesting are even headquartered in that area. Also, I think the white part of the sign is replaceable. "Can-Am" is new. They were protesting some other company a few weeks ago, I'm pretty sure.

I was an active member of an old-line craft union--lily-white and all-male until the Civil Rights Act dragged it into compliance--for thirty years. I think the category "astroturf" only makes sense by reference to the category "grassroots," which is impossibly vague in the first place. There are tenants' organizations, parents' organizations, workers' organizations, you name it; they're identified by their constituency. The mysterious "grassroots" label reflects a history of such organizations' being smeared as "manipulated" by "outside agitators," and replying that on the contrary they're spontaneously formed around the goals of their members. (Unions are a special case because US labor law, unlike that of other industrial nations, confers officially recognized sole bargaining agent status, at least in the private sector. Try explaining that to an Italian or Spanish unionist some time; the names of Mussolini or Franco, respectively, are mentioned.)

In any case, the picture above shows Black men protesting on behalf of a building trades union that, like mine, long resisted admitting African-Americans; it would be interesting to examine the racial composition at work sites that are approved by the Mid-Atlantic Council of Carpenters. It isn't aimed at shoppers or at other workers; the carpenters working at the job site already know it's non-union, and presumably are reconciled to it. Over recent decades the contractors have increasingly chipped away at union jurisdiction, and the union has mounted these picket lines to show the employers that it isn't completely acquiescent. This is theater, in short, and the pickets are extras, like the ones in a movie crowd scene (before CGI); of course they deserve a living wage, and I'd go as far as to say they deserve representation by IATSE or the Screen Actors Guild.

Correction: "it won't be long before the names of Mussolini or Franco, respectively, are mentioned."

I'm unemployed, can I get a job going to protests for other people?

Aren't they essentially conceding the point that union workers really are over-compensated, if they themselves are not willing to pay union wages (their own time) to do a union job (their own picketing)?

Oh, PLEASE. A union doing astro-turfing suddenly makes it questionable? How very unbiased of you! At least the commenters have some sense.

So, seeing the title, and the picture, for a second I definitely thought the title referred to the guy's shirt. Yeah, i'm bright like that.

Assuming that the union workers would do it, the union should use the money it's paying these people to compensate the union members for taking part in the picket. That way, their expenses would be met and it would still be people who actually cared about it doing the picketing.

They have these in Baltimore as well, though they seem to be suspended right now because it's entirely too hot.

They could, theoretically, pay union members for their time on the picket lines...if they were paying anything comparable to what that union member makes for doing their actual job. The picketers they hire are usually day laborers, and I know first hand that day laborers only earn somewhere around miminum wage or a little more per hour.

The irony for me is that the groups here are protesting a practice where construction companies are going to day labor companies in other states with lower minimum wages, picking up laborers, and busing them here to work. So the solution is...to do the same thing, except you pick up homeless people (if they have access to a shower), retired people, and unemployed people who hang around day labor centers to spend their time doing the job you don't want to do and don't want to pay your members their usual rate to do. The only difference is you don't go out of state.