Dmitriy T.M. sent along a Slate slideshow chock full of interesting information on cigarettes and health warnings internationally. I found this particular tidbit most compelling:

As of June 22, 2010, U.S. cigarette manufacturers are no longer allowed to use the words “light,” “low,” and “mild” to describe their product because it gives the false impression that these cigarettes are better for you than others (source). In place of the words, however, manufacturers are using light and dark colors.  Between 2006 and 2009, for example, Salem cigarettes phased out their packages labeled with words (top) and moved to color based differentiation (bottom): 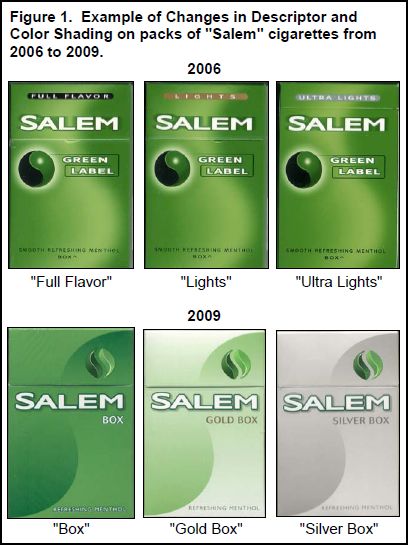 Marlboro has issued a “cheat sheet,” showing the move from descriptors to colors: 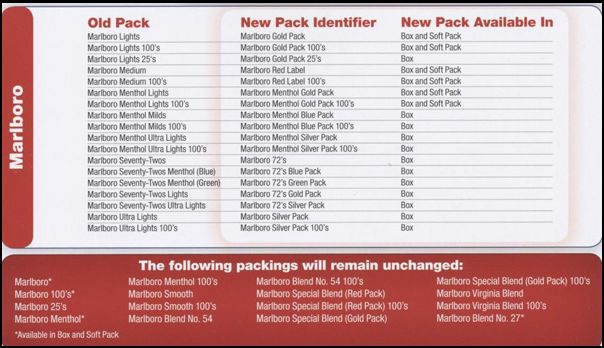 This is a very strategic move on the part of cigarette manufacturers, who know that the colors give consumers the same impression as the words.  At least one study has shown as much:

They were then asked, “Which one would you buy if you were trying to reduce the risks to your health?” Eighty-seven percent of those surveyed selected the lighter-shaded pack, while just 8 percent chose the darker-shaded pack.

The New York City Health Department is trying to combat this new strategy with commercials aimed at exposing it:

It's always nice to see people working around censorship.

Reminds me of the lady I heard once saying that her toddler grabbed her beer and chugged it...but it was ok because it was light beer...

As a graphic designer, I have to call bullshit on this one. The "type" identifiers were already set in colors. Green is their strongest brand identifying color, so that would clearly stay the same. On the other end, the silvers are associated with their differentiating color before the change in law. The gold, lastly, is already too associated as the box color for marlboro lights (now gold). There was no way the brand was making the middle box gold when another company already "owns" that color on the shelf. Aesthetically, it would make sense to make the "lights" be the middle color between green and silver. I think it worked out in their favor if their aim was to still convey "light" cigarettes without being able to say it. However, it's unrealistic to ask them to change the other boxes to orange or blue or something completely unrelated and off-brand.

Let's see how this works.

This is a good example of a problematic survey design, if the question really was “Which one would you buy if you were trying to reduce the risks to your health?” and there was no option to say that they didn't think it would make a difference. On looking at those packs, I am cynical enough to know there is likely to be no health difference. But if I am forced to choose one or the other, I know that IF there were to be a difference, the lighter coloured pack would be more likely to represent the healthier variety than the darker coloured pack is. So if I am told I HAVE to choose and that my choice has to relate to health risks, I will choose the light coloured pack. This has absolutely no connection with my real life behaviour, because if I were a smoker, my real life choices would not be based on perceived "healthiness", seeing as I know about the marketing tricks.

“Which one would you buy if you were trying to reduce the risks to your health?”

Was "neither" an option?

I would assume that for a lot cigarette companies like Salem, this will not have that big of an impact and they will not have to do any major rebranding. Many packs are already color coded and smokers already know what they like and what the package looks like. If I want to buy American Spirits, for example, I either ask for the blue pack or the yellow pack and if I want Gauloises, I can choose Red or Blue. It doesn't really matter what the package says, or does not say.

"Marlboro has issued a “cheat sheet,”"

Are they really 'cheating', with all the connotations of dishonesty that word contains?

Yup, lights smoker here. I wonder if they surveyed smokers? We usually associate "light" with "mild" in the same way that light olive oil has a milder flavor. If you're used to lights, then full flavor cigarettes feel like they're burning your lungs.

I don't associate "light" with "better for my health". Or a light box color.