What to Do If You Spot a Homosexual

Courtesy of Talking Points Memo (via Comics with Problems), I have for you a link to the entire graphic novel (comic book? I’m not sure what to call this thing) Dignity & Respect: A Training Guide on Homosexual Conduct Policy. Here’s the cover: 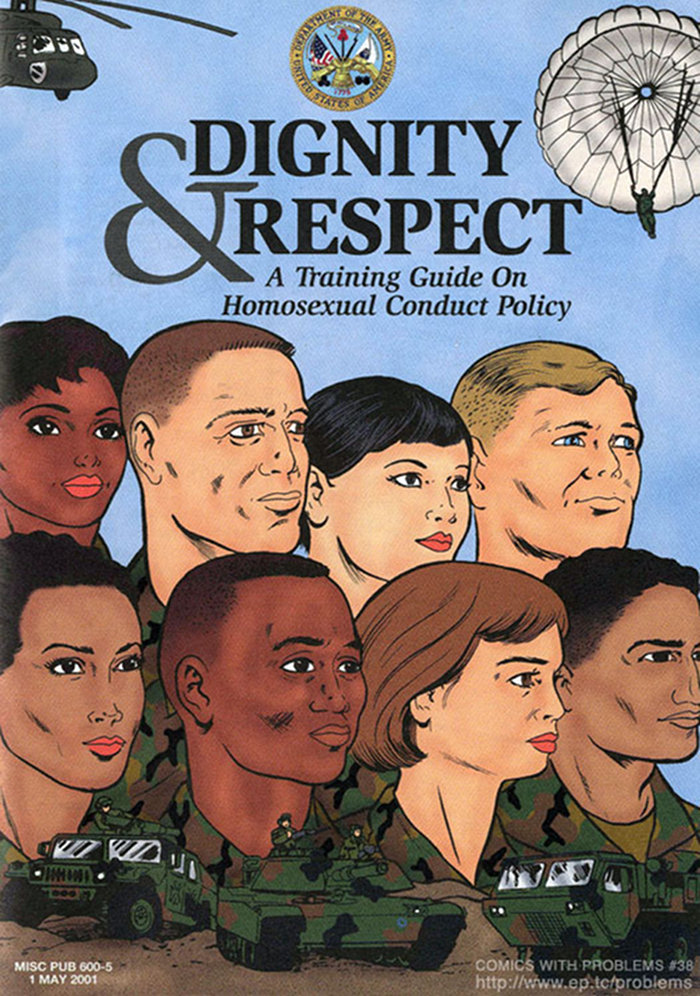 If the cover hasn’t clued you in yet, this is a book meant to educate soldiers about the U.S. Army’s 1993 Don’t Ask, Don’t Tell policy (which applies to other branches of the military as well). It covers what the policy means, what to do if you have “credible evidence” that someone is engaging in homosexual activities (being gay is ok, you just can’t do anything), the Army’s anti-harassment policy (you know, you can turn someone in for being gay and ruin their military career, but you can’t be rude), and provides scenarios of situations that might occur and how a soldier should react.

Among other things you can learn that it’s not ok to imply a male soldier would go on a date with another man, but apparently it’s ok to say that no man on earth would ever go out with a female soldier in your unit: 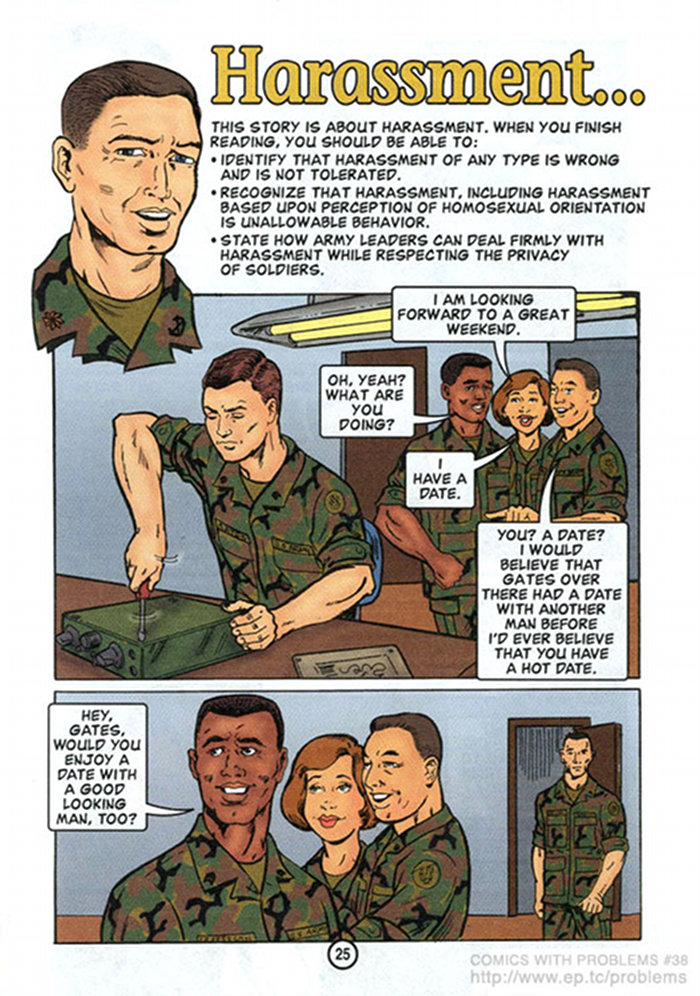 I’m not going to put up every page here, since you can easily get them all at the links above, but it’s worth at least skimming. It’s…something. I cannot imagine that any soldier, even ones who cared about the issue a lot one way or the other, took this book seriously.

I will give them credit, though: the characters are extremely diverse in terms of race/ethnicity and gender.

Did the writer of this comic even talk to current military folks? I can't imagine this phrase coming out of a living, breathing, young person of the early 1990s:

I guess that's the cleaned up way to say "Gates would probably boink guy before you".

Your last sentence points out the dichotomy of the military today. It's one of the most diverse in terms of gender and ethnicity, and for that they deserve kudos (I guess). But the kind of simplistic messaging you saw in this "comic" thing is typical.

I'm not trying to be elitist here, but I do think some of the service branches have to cater their communications to a lowest common denominator of folks, a certain percentage of whom don't even have high school diplomas.

My husband and I have experienced much of this first hand.

I'm distracted by the apparent lipstick some of these soldiers are wearing. You know. All the women.

Is there a handbook on how to choose the right colour to go with your camo?

Truly unbelievable. Like a train wreck...couldn't look away and ended up reading through the entire thing. If I didn't know better, I'd think this travesty was surely created by someone who wanted to make fun of the military.

What the hell is going on at the bottom of page 14?

As much as the comic is amusing and ludicrous, I'm much more bothered by the policy specifics it details- like the one where your Army therapist can report you for being gay, or where you can be drummed out for 'a statement that demonstrates a propensity to engage in homosexual acts'. And the scenario of the soldier getting reported for whatever unspecified act was nightmarish- everyone smiling and following the rules and killing a man's career for something totally and obviously harmless.

I suppose I knew that Don't Ask Don't Tell comprised more than demanding soldiers not volunteer that they are gay, but I hadn't realized that homosexuality was still treated like a crime. It's repulsive, to say the least.

THe bottom of 23 explains why they think it is wrong. Ugg. Somewhere I saw a write up of all the other countries that let gays`serve openly in the military and it is not a big deal at all.

Interesting in a way, but I agree that it is unlikely that anyone would read it.

So apart from the language being pretty terrifying ("accused of being engaged in a homosexual act", OH THE HORROR!), and the policy being equally terrifying (the whole being out as a reason to discharge someone), and the people's faces being only slightly less terrifying, I can't help but notice...

There is a pretty wide variety in gender and race in the 'cast' of this... trainwreck, yes, but there are no gay women.

None of you have ever been in the military.

Why does it look like a kid's activity book or coloring book?

This is sick and terrifying. Thank god I live in Canada. Thank god I am a civilian. I can't imagine living by these kinds of ideas. And I'm "straight!"

A friend of mine's cousin is an out lesbian, and a colonel in the Israeli army!

This is really telling about the hate and bigotry behind this law:

Here's the rest of the comic:

Needs a link to Rachel Maddow's takedown if only for the dramatic reading segments: http://www.youtube.com/watch?v=X9wPljAYWsY

We should photoshop together another chapter, where these characters are taking fire from insurgents in Afghanistan. They're pinned down, desperate for help. Reflexively, they turn their heads and shout for aid from one of their best soldiers, PFC Howard. He's the only one who can save them now. One panel on each of their faces, trapped behind a waist high wall, filled with fear.

Then one panel with Howard, no longer a PFC, sitting in a bar back in the States, chatting up another man, saying "Yeah, they kicked me out of the Army! Best thing that ever happened to me. So what's your career been like lately?"

All based in fear. Is it fear of the loss of control? Whose control? Over what? Oneself? One's dearly-held view of one's status and gender? Is this all based in a straight male fear of tenuous sexual potency and related level of manhood? Of course it is. The military has way more than its share of male posturing and cock-of-the-walk bravado - that's what makes it so appealing to certain men and certain lesbians. And I speak from direct experience as a former Navy recruit who was drummed out in the 80's before my first spit polish had dried.

This is not to say that there is nothing else going on with being in the military, such as real selflessness and heroism, pleasure in doing meaningful work, and just plain old need a job in this crappy economy or the historical method for working one's way out of abject poverty. When humans evolve (if?) to a more grown-up state, maybe bravery can simply be tied to a job well done and not to whether one has "balls" or not (a specious connection now best left in the dustbin of history) let alone who one has sex with, I mean really, yawn. When it comes to putting your life, your working body, and your sane mind on the line, it really comes down to what you have inside at a core level.

I can't think of too many things more ridiculous than putting all this gays-in-the-military pearl-clutching (sorry for the sexist metaphor, but hey, it works) side-by-side with what life is really like minute-to-minute for military personnel is the hellish places they're serving in right now. Finding ways to help those folks do their jobs and keep their humanity and sanity is a far higher purpose for the military powers to be working on.

But that's obviously lost on the people of fear and false bravado.

I kinda liked the idea. I mean, I do not agree with "Don't Ask, Don't Tell," but I would rather read a 36 page comic on the policy than a 15 page wall of text.

You are right. It sure is... "something". Excellent insight. Can't wait to see what's next.

Sorry, just have to say: the characters are extremely diverse in terms of race, ethnicity, and SEX. Not Gender. Different terms, different meanings, and SO not different to the military.

Ok so I had to respond to this blog but it is without a doubt an "eye catcher". Alomst like seeing an extremely attractive person walking by but then you hear this almost unbelievable fart and you think to yourself really, did this just happen? Ok that was probably a bad example but you get the picture. I served just over 13 years in the Navy and noticed a lot while serving on both ship as well as shore duty. Throughout my career we participated as well as received training that ranged from CPR qualifications, to weapons handling, and of cultural influences training. This training would include but not limited to religious preferences, sexual orientation, family issues and drug influences. Early in my career which started in 1996 I honestly do not remember receiving any sexual orientation/harassment training. I can say without a doubt that had I received a publication of this nature at boot camp or at my first duty station I would have definitely made an ass of myself by not taking it seriously. I believe that anyone who was brought correctly understands that you have to be respectful to everyone regardless of who they are or what they do. Very easy to say but the military as a whole has had its issues with a handful of its soldiers forgetting what side they are on and making asses of themselves. I have nothing against homosexuals serving in the military and I may be part of a small percentage of people in society who may not mind but there are some very narrow minded people who may think, homosexuals in uniform could be a detriment to the ultimate goal. That is a crock in my book only because if that was truly the case, and please forgive me, women then would have to surrender their commissions and enlisted statuses so that the real men out in the world could make things happen. Sounds crazy right? But that's the way things would have to be. I don't give a damn if you are homosexual, my only concern is that if you are just understanding that you should never flaunt that aspect of your life. While I was stationed onboard four different ships in the Navy I was never a big fan of personal relationships only because as human beings we tend to forget what is important and give in to our natural desires for one another which is cool, but, its wrong across the board as military bearing and mission are concerned. Do you honestly think now any soldier at this point is making it a priority to mention to their leadership that they are homosexual in these times?

[...] sure, the images dissected at SI are lifted directly from mass culture and include everything from military brochures to cartoons.  But SI is a space where terms like “heteronormative” and [...]